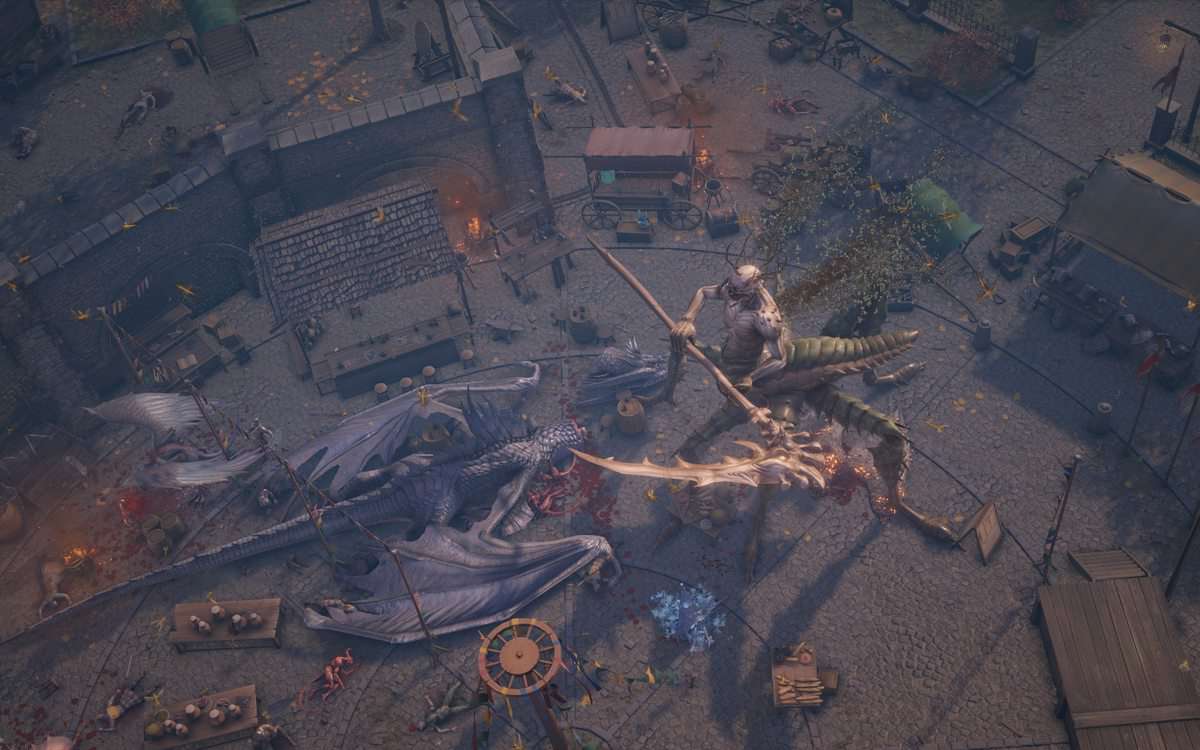 The spells cast by the players in Pathfinder: WotR largely depends on their Character’s bloodline and whether their selected class has access to a certain spell list or not.

If you find that you have access to the spells below, then definitely have them ready, as they are some of the best in Pathfinder Wrath of the Righteous’ vast array of magic!

This spell will summon the 1d4+2 skeletal champions on the field for one round. It is a fourth-level spell in the game. This spell is more important than other summoning spells because of the simple action to cast. This can be a very useful defense line in the game.

This is a level 6 spell, that acts pretty much like False life. However, it affects all allies within a radius of 30 feet and grants them 3d10 + caster level temporary hit points.

A level 7 spell, that allows you to gain negative energy affinity, undead immunities, and DR 5/bludgeoning.

It is a level 3 defensive spell that will boost a teammate’s power. For casting this spell you will need a bit of licorice so always have to keep it with you. This spell gives your target an offensive edge.

It not only speeds up the target it will give you a +1 bonus on the target’s attack rolls along with the+1 dodge bonus. So this is also a quite important spell to have in the Pathfinder: Wrath of the Righteous.

It’s a level 5 spell, that allows you to become an angelic being and acquire some of its physical attributes:

A level 7 spell, that allows you to create a magical emanation, that interferes with all the illusions in it.

It grants creatures a +4 bonus on saving throws to recognize them as illusions and negates concealment less than total concealment within the region.

It’s worth mentioning that this spell is stationary if cast on a point in space and mobile if centered on an object or creature. However, this spell can be made void if creatures or attended objects use spell resistance or a saving throw.

This spell is very important as it can protect you from a lot of enemies. You will have the power of disabling enemies and saving yourself from enemies’ attacks.

It is a level 5 spell, that makes the subject paralyzed and frozen. The subject won’t be able to speak or take any action during this time.

It’s a level 7 spell, that eliminates exhaustion, fatigue, and all negative levels from the affected companions. It also restores all abilities and spells slots up to level 7. However, it doesn’t have any effect on Azata’s Mythic Spellbook.

This is a spell you will have at the very start of the game. This skill is available from level 1. It’s also likely to be used more often than any other spell in the game. This spell gives you a very healthy bonus of +2 to armor class. You should grab this spell once it gets available.

Aegis of the Faithful

This is a level 6 spell, that affects one of your allies in the close range.

The affected ally is being granted the effects of Shield, Shield of Faith, Displacement and Resist Fire, Protection From Arrows, Electricity, Cold, Acid, and Sonic spells for one minute per caster level.

Acid Pit is a level 4 spell in Pathfinder: WotR. As you can see from the name this spell creates a pit of acid that can be used for different purposes.

You can not only destroy your enemies using that acid pit but also can protect your area. You can use the acid pit for blocking the way and protecting available items. This spell casting will need a drop of acid and a shovel.

A level 6 spell, that allows you to release a powerful bolt of energy, dealing 1d6 points of holy damage per caster level. However, for that to happen, the target needs to become prone to make a successful reflex saving throw.

This is a level 8 spell, that basically serves as a Breath of Life to all the allies within 20 feet of radius.

It’s one of the spells that you acquire at the start of the game. It allows you to use your divine powers against a single target, dealing 1d3 points of divine damage.

It’s a level 6 spell, that grants the subject the ability to see things as they truly are.

The subject is able to see through normal and magical darkness, see the exact locations of objects under displacement or blur effects, notice secret doors hidden by magic, and more.

The range of True Seeing is 120 feet.

It’s a level 7 spell, that, as its name implies, allows you to trick fate. When your friend is given a challenge by fate, he is able to respond with a special die.

For three rounds, the subject rolls 20 on all d20 rolls.

This is one of the starter spells of the game, that makes ice and freezing air project out of your pointing finger. If you are able to make a ranged touch attack with this ray, you deal 1d3 points of cold damage.

A level 5 spell, that allows you to create a devastating storm of abyssal energies, dealing 1d6 electricity and 1d6 holy damage per caster level.

It affects all the creatures within 40 feet radius.

It produces a blast of hellfire, that deals 1d6 damage per caster level to the target. A creature, killed by this spell, must make a Will save. Otherwise, he will be damned to Hell.

A level 3 spell, that grants total concealment to the subject. There is a 50% chance of a miss.

This is a level 5 spell, that implants an illusion in the minds of your targets, that they are engulfed in tangled webs.

Those, who come to believe in the illusion, must make a Fortitude save at the beginning of each turn. Else, they would become nauseated by the phantasmal spiders for that turn.

This is a level 9 spell, that has the same function as Phantasmal killer, except that it can affect more than one creature.