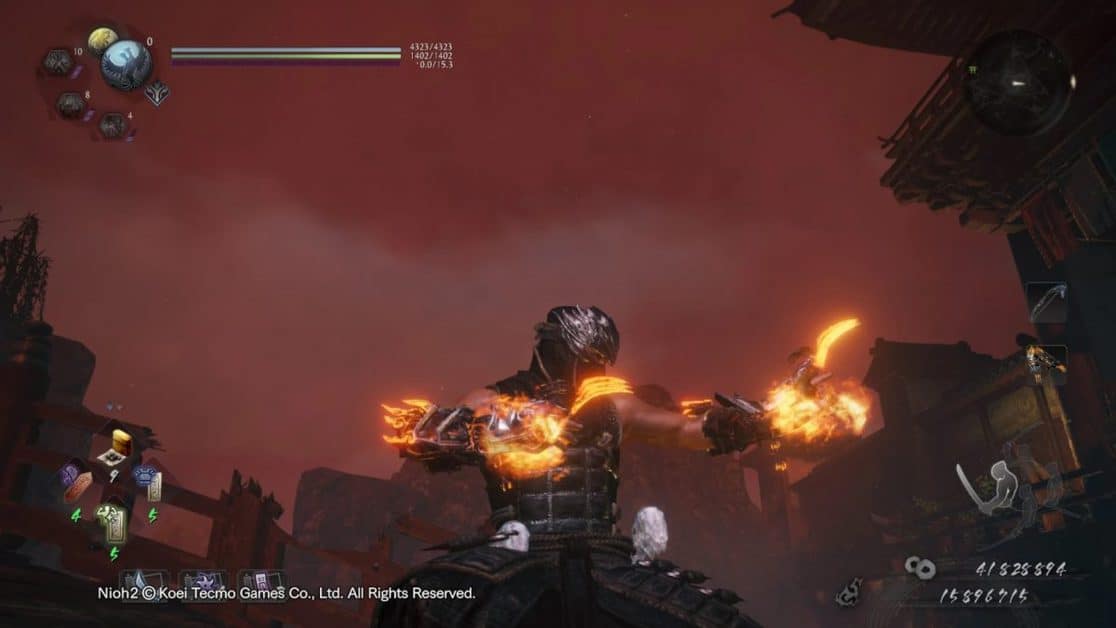 The Blighted Gate is a Main Mission in Nioh 2 Darkness in the Capital DLC. You start this mission at The Capital, and you must fight your way through a wave of Yokai and human enemies such as the Shinobi to reach the final stage of the mission, the Tsuchigumo Boss Fight.

In this guide, we provide a detailed walkthrough of the entire Nioh 2 The Blighted Gate mission.

You’ll start The Blighted Gate mission at The Capital, Heian-Kyo in Yamashiro Province.

First Kodama Shrine
Head inside the entrance to come across a Kodama Shrine on the left. Head left from the shrine, to the next part of the area.

There are multiple way’s you can explore this area, you can either drop down or go around.

The recommended and easy way is to go around and then drop down into a cave like section of the area which leads you inside a building with few Archers guarding it.

Take them down and go exit the building through the door where you found the Archers and come across a Tesso feeding on a corpse. Take it down and search the corpse to receive x2 Fragrant Wood.

Once you’ve looted the corpse, loot x1 Sanada’s Crimson Helmet and x1 Seki Dual Uchigatana from another corpse near the fire and head inside the building again.

Once you’re inside, you’ll encounter a Tesso. Kill it and head inside the door on the right and come across a dead body.

Loot it to receive x1 Leaf Tip Spear, Kawanami Kusarigama, and x1 Blessed Sleeve Hat. Also, make sure to explore the backside of the building as well and open few chests in the area.

Once done, head into the Dark Realm to encounter a Yasha yokai. The best strategy is to aim at the head with the ranged weapons you hold.

Bari it towards you and out of the Dark Realm. But make sure not to lower Yasha yokai too far from the entrance as it will go back to its original place.

Take It down, deal with the remaining yokai and use the entrance on the left to head into another section of the area.

In this area, you’ll find few enemies guarding the top of the building while two Fox Spirit yokai are roaming inside and securing the lower part of the building.

Head inside the building, kill the two Fox Spirit Yokai, push the water bucket down and kill the Shinobi on the roof and you’ll find a Sudama near it.

Now, head out of the building from the right side and come across a Nuppeppo. Kill it to receive a Transient Blade, Regal Lion and Bone Eater and 1x Elixir.

Open the Gate on the left, go through the flames on the right and fight a Koroka. Kill it to receive a Taro Tachi, Kingo’s Greaves, Imperial Monks Hood and 1x Elixir.

Head inside the building in the place and explore to find multiple useful items inside the chests. Loot them and head up the slop, left to the gate you opened earlier in the area.

Fight few enemies and drop down into the ditch to come across a Fox Spirit yokai. Kill it and move forward to find a Kodama.

Head up the ladder, kill another Fox Spirit yokai, an Oboroguruma and a Tesso to come across another Kodama up the stairs to the right.

Now, head up the slop to find your Second Kodama Shrine.

Second Kodama Shrine
Head left from the Second Kodama shrine and face few Gaki, take them down to come across Yasha.

On the left where you found Yasha, there a Kodama behind few walls. So, kill the Yasha and find your next Kodama. Once found, loot all of the houses since they all carry a lot of loot.

You can use the wooden bridge in the area to head onto the roof of the homes, eventually leading yourself to a Dark Realm. In this area you’ll find few Gaki, Skeleton Warriors and a Sudama.

Once all of the area is cleared and you’ve found a Sudama, drop down to fight more Gaki and an Oboroguruma.

Kill them, loot the large chest on the far end then open the Gate on the left that leads you to your Second Kodama Shrine.

Drop down into the underground area, move forward and face Yokai mist. Kill it and take care of few Shinobi. There’s a corpse in the area, loot it to receive x1 Bloodspider Blade. A Tesso will appear and you know what to do with it. Kill it and find another Kodama behind it.

Moving forward, you must climb the ladder and reach another part of the Capital. In this section, you’ll find a Yasha and few more Yokai near the burning area.

Kill them and find a Scampuss under the tree, you can also find a corpse there which you can loot to receive Onmyo Mage’s Locks.

Once down, enter the flaming building. But make sure to find a Kodama near the wooden platform.

Now, you can enter the Dark Realm to face a Tesso, Spider yokai, Koroka, Warrior Skeleton and on the second floor of the building you’ll come across an Infernal Fox.

Kill the fox, loo the large chest and head to the balcony of the building to find another Kodama.

A path near the balcony takes you to the roof of the place, head up to find a Sudama guarded by a Gaki. Once that’s done, head to the Kodama Shrine downstairs.

Third Kodama Shrine
Pray at the Shrine and head outside the entrance on the left to come across a Yasha. Take it down and get ready for the Tsuchigumo Boss Fight.

Tsuchigumo is a Spider Yokai, it’s basic moves are leaping attacks during which it shoots webs that can trap you.

This Boss fight is a simple dodge and attack fight where you can dodge Tsuchigumo’s web attacks and hit it with few blows with the Flaming Heron Feathers.

The best weapon that is recommended in this fight is the Switchglaive, due to it having a balanced stat spread.

Once you’ve defeated the boss, take the items, end the mission and receive Guardian Spirit from Seimei, Kuzunoha the Fox.