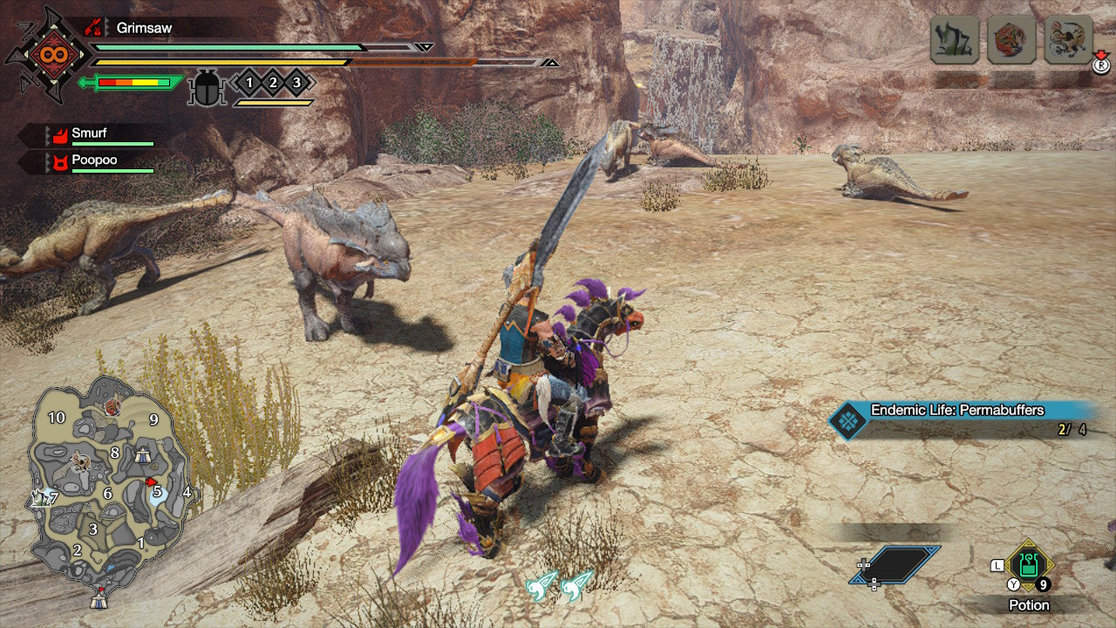 Monster Hunter Rise boasts a significantly large world with all sorts of monsters running about. You might find traveling on-foot rather tedious, and that’s why it’s best you find sub camps along your journey. In this Monster Hunter Rise Sub Camp Locations guide, we’ll be showing you where you can find these fast travel points throughout the map.

Unlocking sub camps in MH Rise is rather simple. However, it’s not as simple as you might have found it in other games. Gaining access to these fast travel points requires you to always earn favor by completing a minuscule quest that involves a few deliveries or eliminating easy creatures.

When players find a camp, they need to talk to Kagero the merchant who will assign you with the quest. Once you have your new sub camp in MH Rise, simply go ahead and press Minus (-) to get to the fast travel menu and go to whichever one you recently unlocked or would like to go to!

You can find sub camps in:

There is only one sub camp that can be found in this region. Head towards the north side and reach the top of Area 10. Climb up the wall with the vines spread out and go right from the top to get to a dead-end. There will be another climbable wall here, on top of which is a suitable location for a sub-camp.

Go back to the village, and Kagero will assign you a new quest which is ‘Sub-Camp Security.’ Kill eight Izuchi in the Shrine Ruins and talk to Kagero again to unlock the sub-camp. Here is the exact location marked on map. 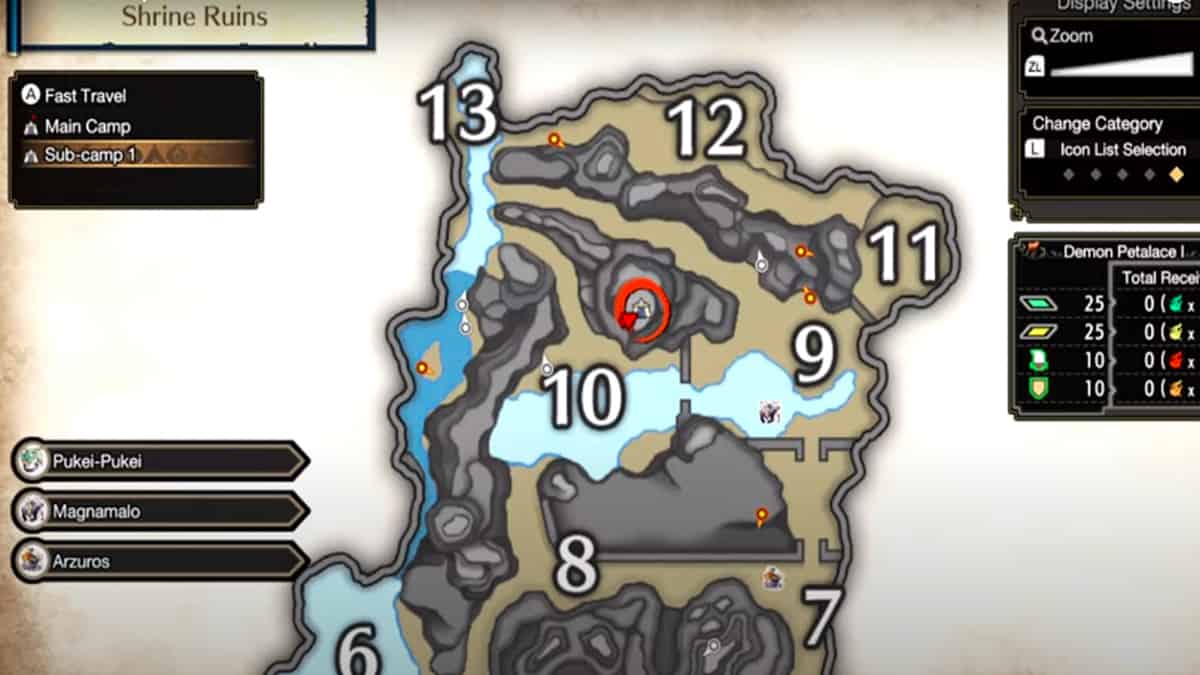 First Sub-Camp
The first camp can be found by locating yourself on left side of the map. This location is between Areas 6 and 7. Go to the higher ground on your way there and continue North.

Stick to the mountain on your right and you will eventually find a pit to drop into. This area has the sub-camp and will give you the indication ‘Discovered a suitable location for a sub-camp.’

Talk to Kagero at the village and complete the new sub-quest, which asks you to slay eight Zamite. Once you return to Kagero, you will have unlocked a new sub-camp for you to fast travel to. Below is the marked image of map. 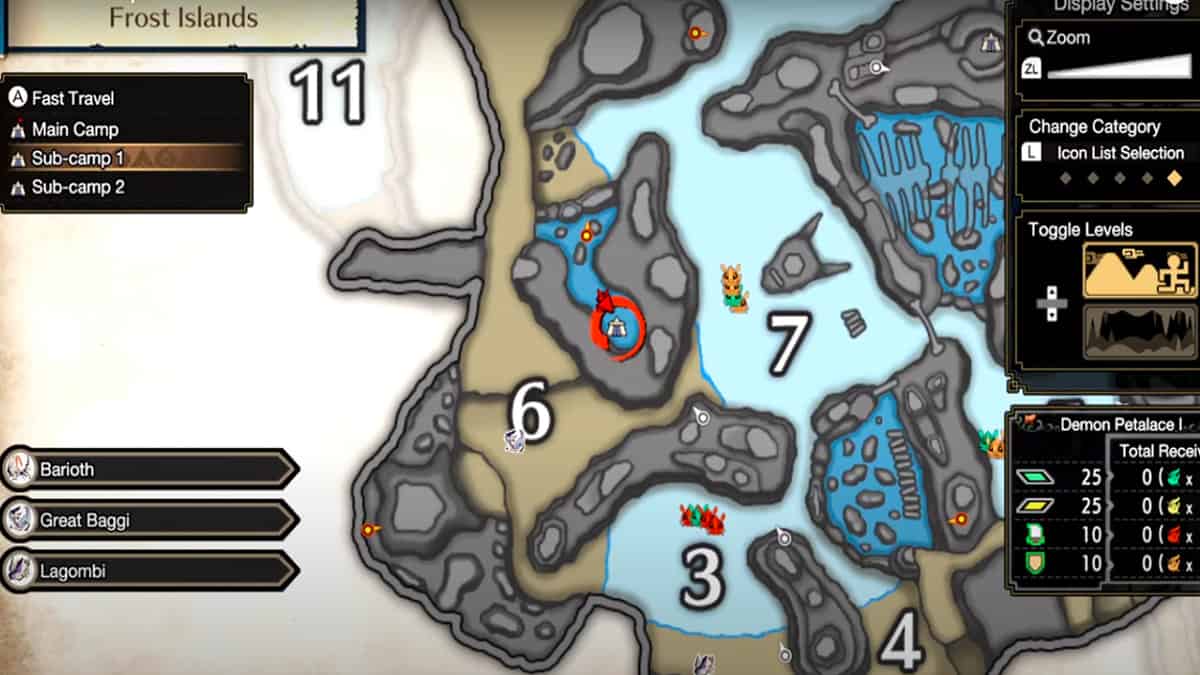 Second Sub-Camp
The second camp can be found in a rather elevated position. Go to the south of the map between areas 3 and 5 and utilize your Wirebug or Palamute to go to the platform in the center.

Use your Wirebug again to jump off the cliff and utilize the bridge to continue heading North, towards zone 10. Continue right on the mountain to zone 8 and you’ll find yourself North of the dark blue area. So, it is exactly located between Areas 8 and 10. When you reach the top by climbing above water, you will get close the sub camp. Next to all the honey, there’s a discoverable sub-camp.

The side-quest for this sub-camp asks you to get two Warm Pelts and 4 Monster Bone S. Marked image below will lead you to the location exactly. 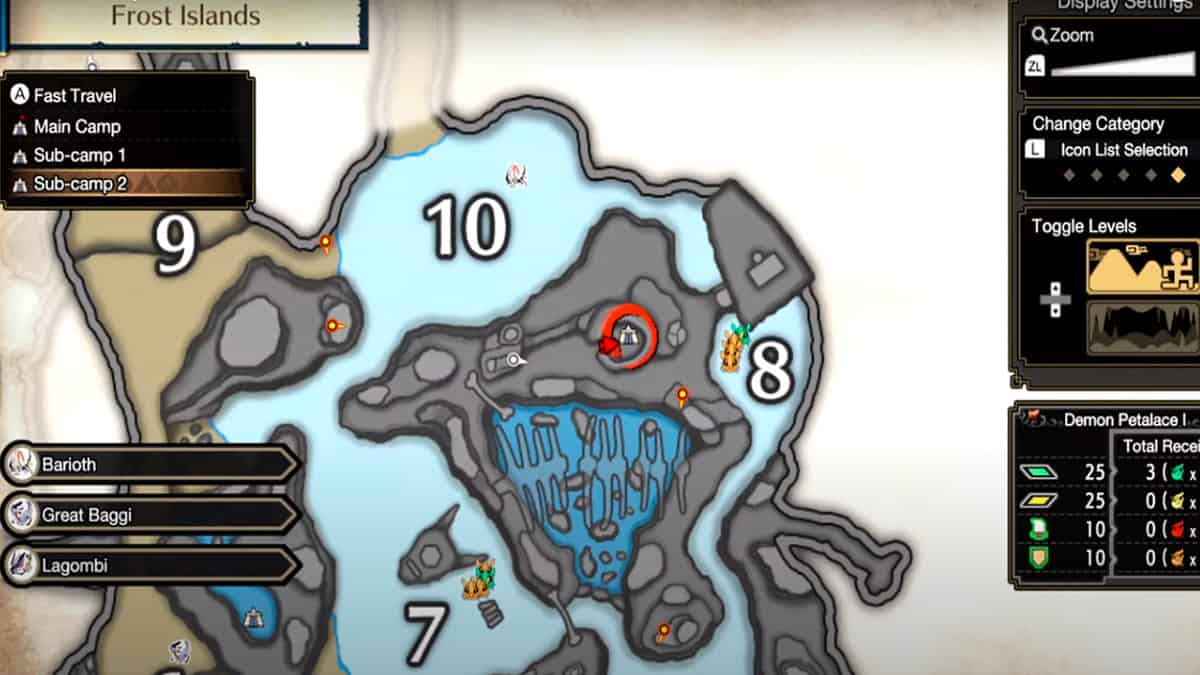 First Sub-Camp
The very first camp in Sandy Plains can be found by going to the region between Areas 3 and 7 and using the vines to climb on top. Now jump to the wall to your West by using Wirebug or the vines next to you; vines are more convenient, by the way.

Use yet another growth of vines on the Western wall from this platform to get to the sub-camp.

Speaking to Kagero will assign you with a new quest that asks you to defeat eight Kestodon in the Sandy Plains. Follow the map image below to reach the exact location. 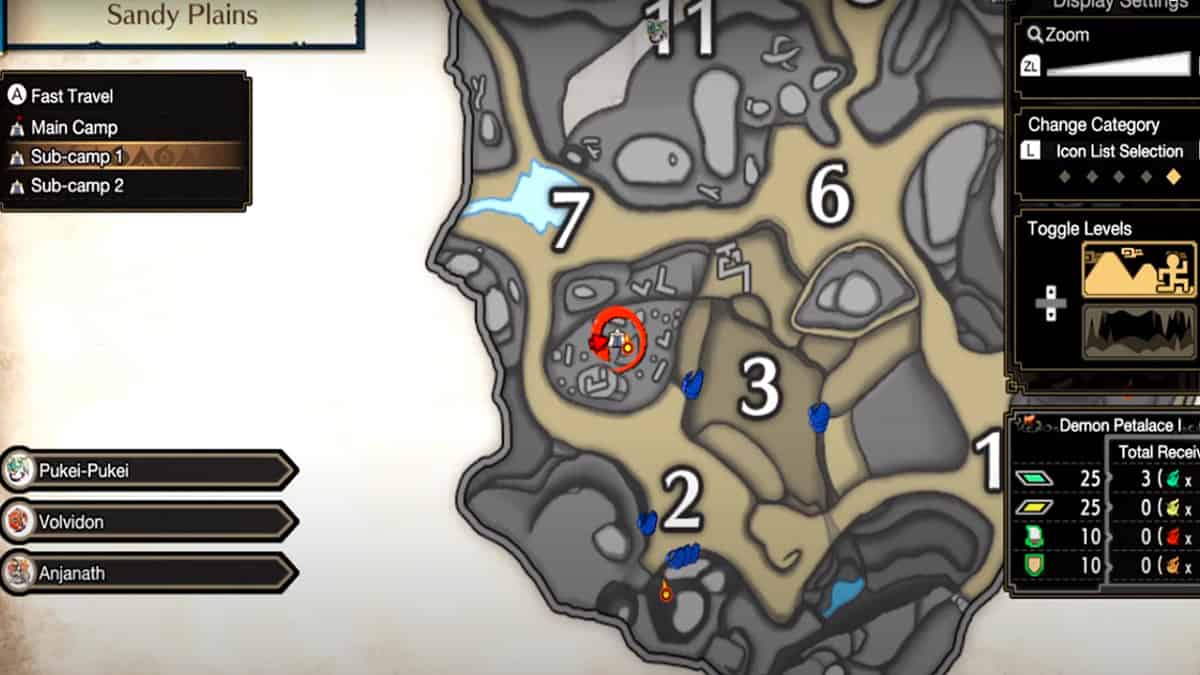 Return to the village and the new quest will ask you to bring Kagero a Lacombi Pelt and two Monster Bones M. Marked image of map is shown below. 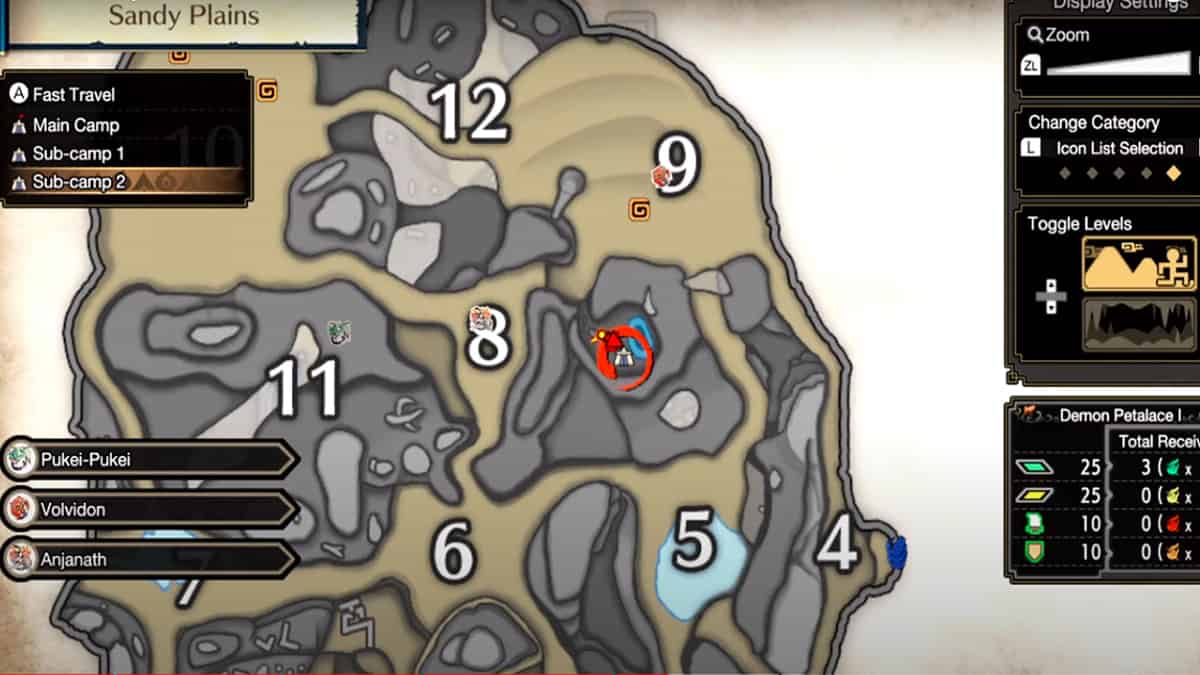 Use the dry path in the area from the base camp, and you continue to zone 11. In your journey to zone 11, you’ll find a vine on the upper ground; take it to get to the sub-camp for the Flooded Forest. Found between Areas 11 and 6 and located above the high rock. You can reach high rock by climbing the vines.

Head back to Kagero and he will assign you a quest that requires you to kill eight Wroggi within the Flooded Forest. Below image can help you reach the location easily. 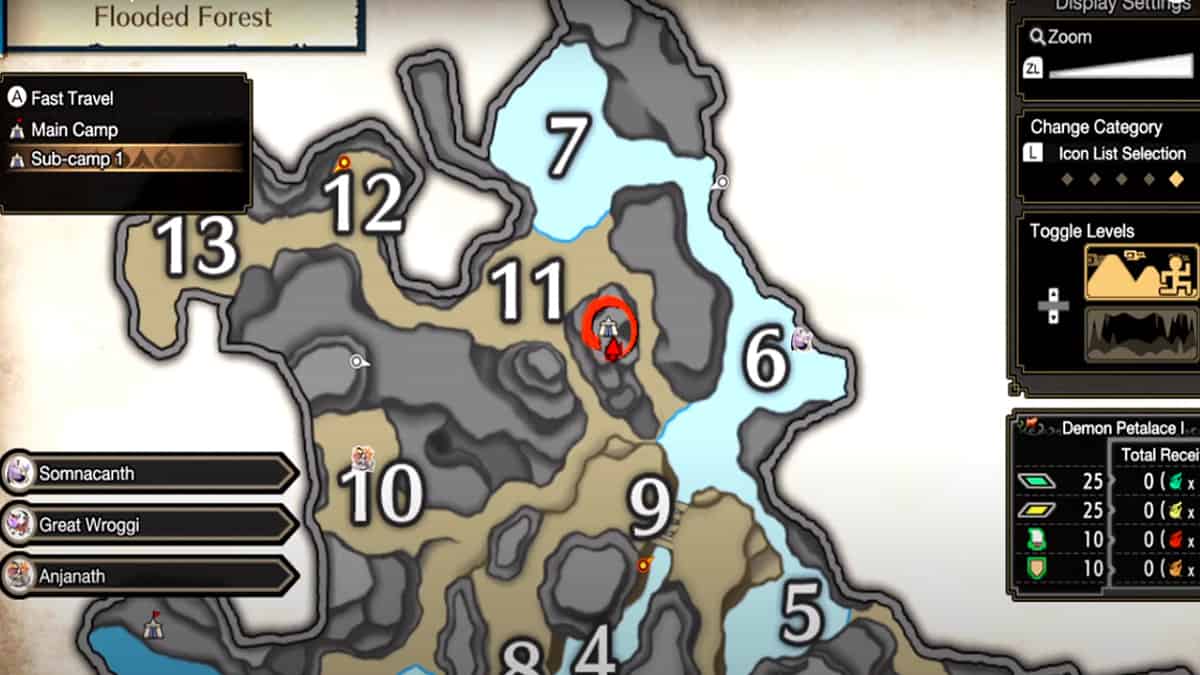 For the Lava Caverns, you can find two Sub Camps.

First Sub-Camp
In the Northern corner of zone 10, you can find the first sub camp in the Lava Caverns. It’s just behind the Iridescent Ore point. Once you get the message for ‘Suitable Sub-Camp,’ go back to Kagero to receive a quest for defeating eight Uroktor in the Lava Caverns map. 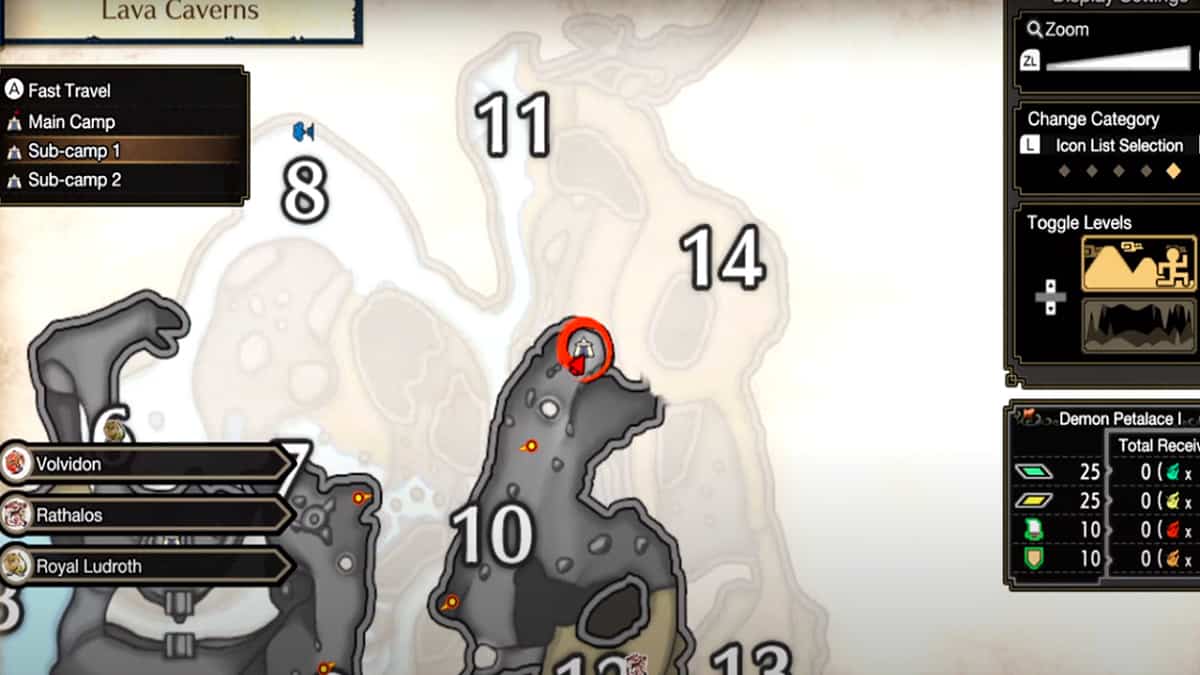 Second Sub-Camp
The final sub-camp can be found just between Areas 6 and 7. Head back to Kagero once you’ve found it to receive a quest to give him a Tetranadon Hide and two Monster Bones L. 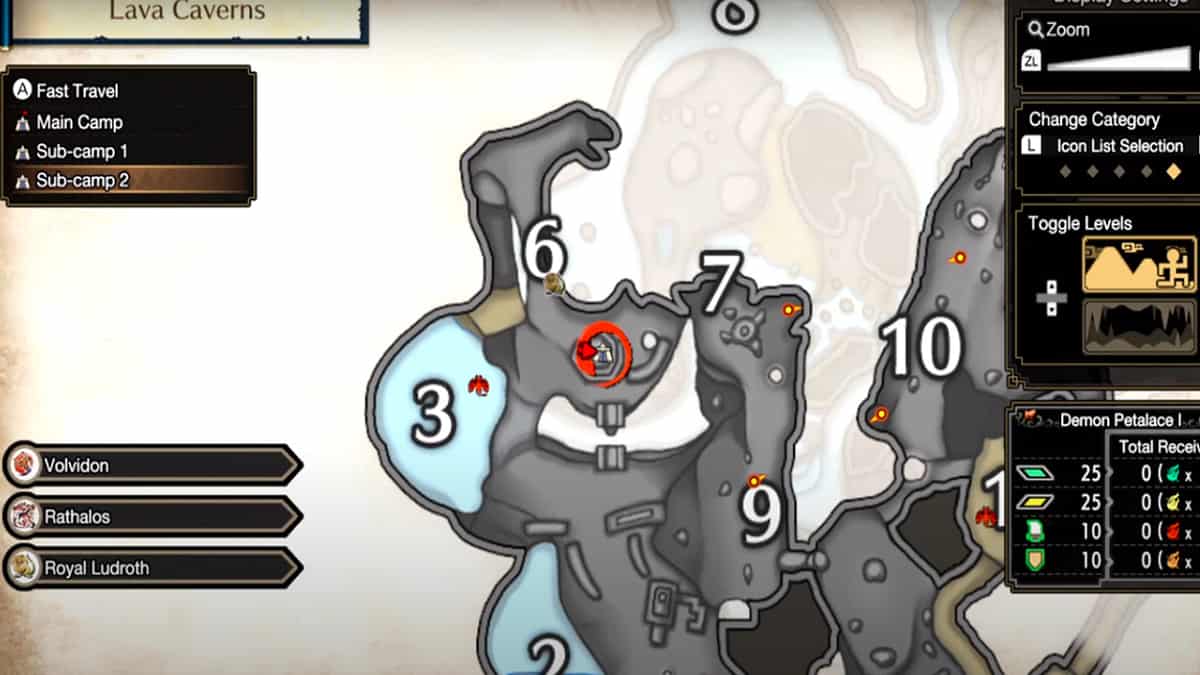 Added in the Sunbreak expansion, the Jungle zone has only one subcamp. The Jungle subcamp is located right in the middle of the region, near Zone 8. The camp is on top of a mountain. In order to unlock the Jungle Sub camp, players need to defeat 8 Hermitaurs in the area.