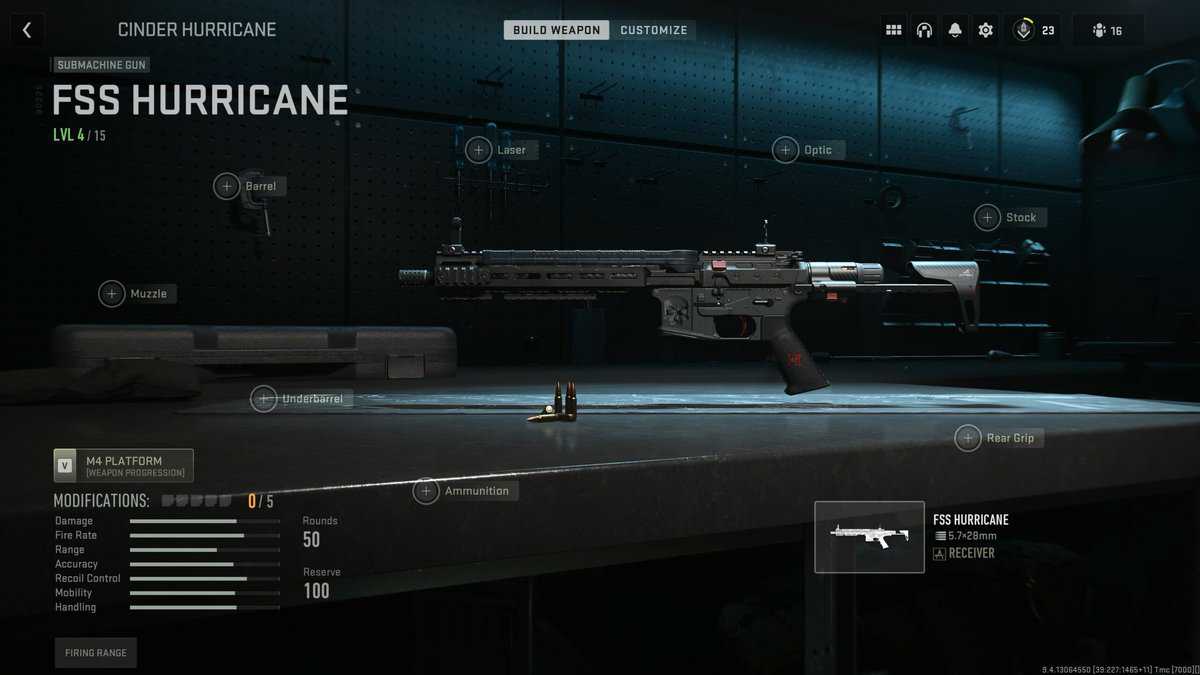 Previously with Modern Warfare 2 beta version, we witnessed a rave about FSS Hurricane, an SMG  weapon with extremely low recoil and thrilling firepower. And now, with the game being widely available for users in its meta form, we’ve learned that the weapon has managed to sustain its ideal features, and if anything, it can be improved further with a well-crafted class setup.

Homage to the real-life gun AR57, FSS Hurricane belongs to the M4 Platform in MWII. To unlock it, players need first to make a class based on the M4 weapon platform.

With perfect attachments, players can make FSS Hurricane a fast-firing SMG that rips out enemies in close counters in no time. It closes the gap between you and your rivals, and with reliable performance, it converts you into the greatest threat on the field.

This guide will teach you how to unlock FSS Hurricane in CoD MW2, its perfect loadout, and a supreme setup. So without further ado, let’s begin.

This FSS Hurricane class setup in MW2 is for players who are big fans of the fast combat playstyle and want to control the battlefield by wiping out enemies and clearing the way. With recommended stock and rear grip attachment, we’ve ensured that while you’re mobile, FSS Hurricane delivers precise aims and kills off enemies effortlessly.

With Phantom Grip, you’ll be reacting fast and have the ability to recognize your threat instantly and aim at them. At the same time, the FSS-X7 Barrel and VX Pineapple will take the process further for you by providing great Recoil and Bullet Velocity.

With the below perk selection, we made sure that when you have this SMG weapon equipped, you have an increased crouch movement that will allow you to hide and move fast from dangerous areas. Moreover, you’ll have killstreaks and gain ammunition from fallen rivals.

Since you’ll be engaging in close combat, Battle Rage will ensure you have a constant loop of stamina and health regeneration.

Using the Bomb Squad perk allows picking up the live grenades without them getting burst into the hands. The reason is Bomb Squad reset all the fuze timers from explosives and avoid you from getting any damage from the non-killstreak explosives.

Picking up leftover ammo works out best when it is in short supply on the battlefield. This can happen with the Scavenger perk which lets you pick up the ammo and knives from the deal players.

Reloading in the middle of the fight can cause you fatal damage but with the help of Fast Hands, fast reloading and swapping on the battlefield is possible.

Drill Charge for the lethal equipment drills a hole in the wall to drop the explosive charge on the other side where the enemies are. This lethal equipment can be your perfect friend when running closed courses such as buildings in Warzone.

Talking of explosives, Stun Grenade as lethal equipment lets you stun the enemy before exploding. As for the field Upgrade, Silent Steps allows minimal footstep noise on the battlefield.