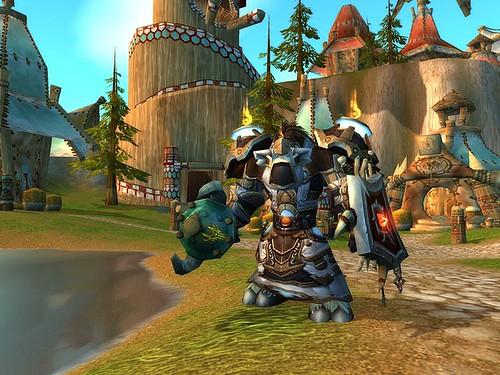 With Mists of Panderia looming over the horizon we think it’s about time to take a look at the specs for the Retribution Paladin. Note that this guide is primarily optimized for group PvE.

Basic changes
While unlike the massive pally makeover that happened in Cataclysm there have been some significant alterations leading up to Mists. Paladins have a newly redesigned the talent system so that it is now based around player preference and situational usefulness.

Players receive their core abilities automatically when selecting a spec, and talents serve to supplement different styles of gameplay.

Paladins also have a slew of new abilities:

Stats
The stats have been retooled a bit, interestingly enough. Normally strength would be head and shoulders above any of the other stats, but while it’s still your most important attribute its dominance isn’t quite so pronounced anymore.

Hit and expertise of course needs to be capped at 7.5% as soon as possible, this will make sure your attacks and spells don’t miss.

Strength and Haste are now looking almost equally important. Because of a retooled Sanctity of Battle, haste now affects both the cooldown and global cooldown of Judgment, Crusader Strike, Hammer of the Righteous, Exorcism, and Hammer of Wrath, this is huge. After you’ve got hit and expertise capped, look to add to these, with a slightly higher focus on strength.

Rotation
Since cataclysm, rotations have been more about using the right abilities when they would be most effective instead of in any particular order, with that in mind here are some guidelines in no particular order:

Tier 1
All of these are movespeed bonuses, Long Arm of the law and Speed of Light provide big, temporary boosts while Pursuit of Justice is a smaller passive boost that scales with your holy power. I recommend you take Pursuit of Justice as it’s the most reliable choice but it’s up to you to decide what you need.

Tier 2
Here Fist of justice will probably be the best option, although the other CCs last much longer Fist is a hard stun which cannot be overlooked. Choose which one would be more efficient for the situation, and repentance will give you a large window for situations where you need to back off and regroup.

Tier 5
Divine Purpose win the race here in terms of raw damage output but due to it’s random nature isn’t extremely reliable. Go for Holy Avenger if that puts you off.

Tier 6
At the final tier you should take Execution Sentence, as it seems to offer the most bang for your buck.