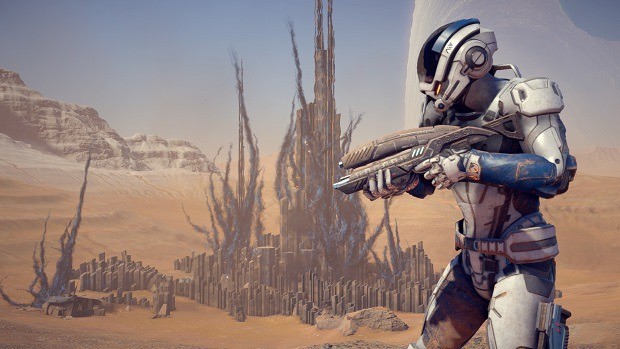 Mass Effect Andromeda Ryder Family Secrets Guide to help you locate all the memory triggers to view Alec’s memories and complete the quest.

In order to initiate this ‘Allies and Relationships’ quest, you must’ve visited Habitat 7. This mission basically requires you to find memory triggers scattered all around the world to remove SAM’s memory locks to view Alec’s memories.

You should be able to see the quest added to your journal immediately after meeting SAM in Nexus: Habitation Quarters at the very start of ‘A Better Beginning’ main quest.

In our Andromeda Ryder Family Secrets Guide, we’ve detailed everything you need to know about completing this ‘Allies and Relationships’ quest.

This operation is unlocked after speaking with Director Tann during ‘A Better Beginning’ priority ops. Alternatively, you can also speak to SAM at the Hyperion Sam Node or find one of the sixteen hidden encrypted memories.

After the conversation with Tann, Dr. Harry Carlyle tells you about a way of communicating with your sibling. This section of the operation is completely optional but if you ignore it now, your sibling will negatively comment on your choice.

Speak to Dr. Carlyle to start the conversation. During the conversation, you can either tell your sibling about the situation or lie about everything that’s going around. Your choice here changes the Priority Ops scene so keep this in mind!

SAM basically needs to experience sixteen trigger in order to unlock encrypted memories. In order to start, speak to SAM from the Hyperion SAM Node chamber or by finding one of the sixteen hidden encrypted memory pickups.

The first memory trigger can be found in your father’s room which is the next door to the SAM Node, near the kitchen table.

After acquiring the memory trigger, speak with SAM to play the memory. After this, you’ll be required to access audio logs in your father’s room and find the other memory sequences.

Memory Sequence #2
The second memory sequence shows Ryder Sr. speaking to Ellen about using SAM and her biotic implants to cure her illness.

Memory Sequence #3
The third memory sequence shows the family reunion and Ryder Sr. sharing a story about an adventure on Mars followed by dinner.

Memory Sequence #4
The fourth memory is all about a discussion between Ryder Sr. and a secret benefactor. Since Alec is out of cash for developing SAM and curing Ellen’s illness, the secret benefactor suggests a way.

Memory Sequence #5
This memory shows Ellen in her dying moments followed by a philosophical conversation with SAM about life and death.

Memory Trigger #3
Location: Kett Base
This memory trigger is located on a cliff on top-north side of the facility, underneath a forward station.

Memory Trigger #4
Location: Prodromos
This memory trigger is right next to August Bradley in the center of Prodromos.

Memory Trigger #5
Location: Turian Encampment
This memory trigger is found underneath a tall light near some turian crates.

Memory Trigger #6
Location: Mithrava
This memory trigger is near an Angaran statue platform on top of the tower in Mithrava.

Memory Trigger #8
Location: South of Hjara
This memory trigger is located on top of a mountain facing Hjara – near the edge of the mountain.

Memory Trigger #9
Location: Future Settlement Outpost Site
This memory trigger is located on the south side of the Resistance Base, on the west edge of Voeld.

Memory Trigger #10
Location: Kett Mountain Base
This memory trigger is located on the very top of a small mountain with the large Kett mountain on its south side.

Memory Trigger #11
Location: Languish
This memory trigger is on the east side of New Tuchanka, on top of a hill.

Memory Trigger #12
Location: Languish Cave
This memory trigger is inside a cave between the Remnant Derelict Ship and the Krogan colony of New Tuchanka.

Memory Trigger #15
Location: Sulfur Springs
This memory trigger can be found near the future site of the Initiative Outpost.

Memory Trigger #16
Location: Sulfur Springs
This memory trigger is on a peak right next to the western Remnant monolith.

To learn more about the secret benefactor, head to Alec’s quarters and use the Archive System followed by selecting ‘Benefactor’ and ‘Meeting with Benefactor’. Once done, speak with Tann to learn more. Sadly, speaking with Tann won’t get you anywhere.

Therefore, head over towards Addison’s office and check the Nexus records. From there, check the security footage to view the ‘Garson Investigation (CLOSED)’ followed by entering the tram and heading towards the docking bay.

The next thing that you need to do is to head to the Nexus apartment where Jien Garson was found dead and scan the room for clues. After deducing that her death was not natural, continue to scan the room in the hopes of finding more information.

A little later, you should be able to find a hidden room on the right-hand side wall with two datapads inside. Use them both followed by speaking with Garson’s VI display in the Nexus. In the interface, select ‘Secret Message’ and learn all she had to say.

To access the final memory, head to SAM Node and watch the memory and use ‘Fulcum’ to access the memory. After this point, it’s all story which I shouldn’t be spoiling here anyway. Sit back and enjoy the story as it unfolds.