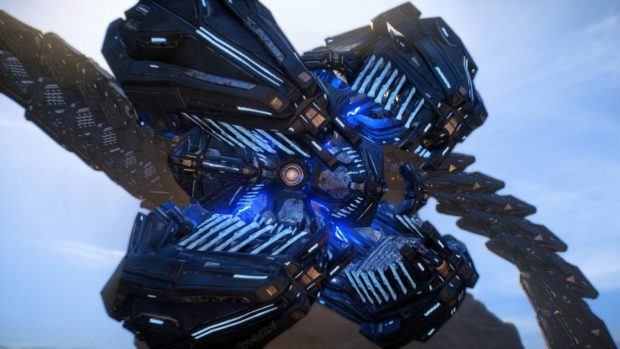 Mass Effect Andromeda Meridian: The Way Home Mission Guide will help you with the mission and will guide you on how to defeat the Architect and completing the story.

Open up the Galaxy Map and take the Tempest to any of the three marked systems and launch a probe to reveal the location of Meridian city.

As you locate the City, head back to Khi Tasira. As soon as you confirm the mission a warning will pop up notifying that you are entering the pint of no return until the mission is over, so make sure everything is ready.

Confirm the mission and land, from the landing zone head towards the mission marker that will take you through a series of doors and you will encounter Remnants along the way. Keep going until you reach the console.

When you activate the console the things will not go according to plan but you will be able to make it to the next marker. Then you will be given control of the other Ryder sibling. Head to the armory and grab a weapon then make your way through the Nexus, however, enemy presence will be minimum but you won’t be heavily armored or armed so proceed with care.

Once SAM is rebooted you will regain control of your main character. There will be a terminal nearby, interact ith it and keep interacting until it kicks in. Head through the doorway and you will reach a gravity well. Once you have made your way to the Tempest go to the bridge and trigger the final stage of the mission.

The final stage of the mission will start you driving Nomad to the southwest down the massive canyon. There’s no real danger, so enjoy the ride and the scenery.

Nomad will break down eventually and you will have to traverse the rest of the way on foot and there will be Krett resistance. Clear them out and keep moving forward towards the Southeast. Once all of the enemies are taken care of enter the Meridian control.

You will be going alone in there in the pursuit of Achron as all other characters will stay behind to guard the entrance.

Interact with the Remnant console and a gravity well will be revealed. Take the Gravity Well down deep into the Meridian vault. Expect heavy resistance, so take them out and continue south through the vault.

Exit the hall and there will be more enemies for you to take care of, once they have been dealt with two additional Kett dropships arrive to deploy Kett reinforcements. Continue fighting, and Remnant defenses show up to help with the army of Kett. However, the Remnants will be hostile to you too.

Once they are all done, proceed south and there will be another console, interact with it to activate a bridge to the west. Keep going ahead and you will approach a large auditorium-like room.

Here you will fight more high-level enemies and there are going to be a lot of them. Once they are done, proceed ahead to the south and a cutscene will trigger.

After the cutscene, you will face even more Kett at the southern end of the vault network. You will face Chosen, Anointed, Destined, and eventually a Fiend and Remnant Destroyer at the same time. It is going to be very difficult ao be careful.

One they are all defeated continue to the Gravit Well and continue to the final area to confront the Archon. In the area ahead you will encounter non-hostile observers and the path is pretty straight just keep going forward.

At the end of the area, there will be a gravity well, use it to transport Ryder over a breathtaking view around the heart of Meridian and get ready for the confrontation.

Before you get to the final assault more Kett enemies will attack you but this time staying alive is going to be more difficult. After the enemies have been defeated a cutscene will trigger.

The Achron has interfaced itself with an Architect and you have to stop him. The primary objective is to disable power relays to weaken the Archon’s connection with the Architect. Your sibling Ryder will tell you which console to interface to progress.

Phase 1
You will also face Remnants units while trying to defeat the Architect. This is the first phase of the boss battle. Once you take care fo the first wave, another wave comes in from the north. Once you reach to the relay to the northwest, fortify and defend it while your sibling hacks Architect’s conduits.

Wait for your sibling to tell you when to target the Architect’s targetable head conduit. Dealing enough damage will cause the Architect to temporarily disable. When the relay is ready interface with it and continue to the Phase 2.

Phase 2
Your way to the central section has been cut off by a river of ferrofluid. Your sibling will direct you to a console in the westernmost part of the area. Interact with the console to raise platforms and cross to the other side.

When you cross more Remnant enemies will pop up, now you will have to defeat them while keeping yourself safe from the Architect. As you clear the area approach the east section and as you arrive the gap between platforms the Achron will send more Remnants at you.

All you have to do is survive at this point as there will be an endless supply of Remnants and there won’t be much room to maneuver. Also, you need to keep and eye out for the Architect’s rapid fire and grenade attacks.

As soon as the architect is disabled throw all your resources into disabling it or withstand its attacks while dealing with the destructible Remnant.

Once the hack is complete defeat the remaining enemies then cross the chasm to the north using the raised platforms and more enemies are waiting for you on the other side.

Phase 3
As this phase starts more of your squadmates will arrive to help you. Keep an eye out for the Architect’s tentacle and energy beam attacks. If you have enough firepower then try to take out its head conduit.

When enough time has passed interface with the nearby power relay console, then eliminate any remaining threats. The hard part is finally over.

Return to the central Remnant console and activate it, this will completely disconnect the Achron from the Architect and this is the end of the story.

That is all for our Mass Effect Andromeda Meridian: The Way Home Mission Guide with tips on how to defeat The Architect.