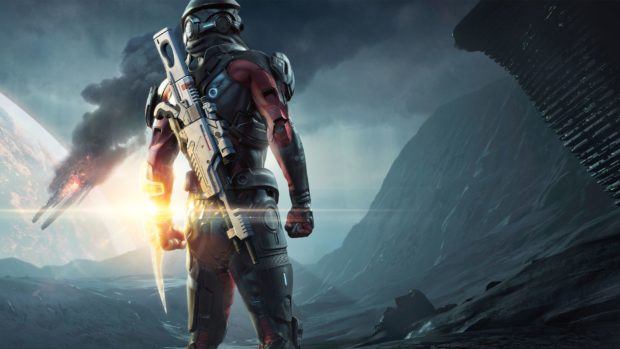 Our Mass Effect Andromeda Journey to Meridian mission guide will help you through the entire mission, tell you how to get to the Meridian city and how to defeat the Destroyer and Achron’s Sword.

Journey to Meridian Mission is not only a difficult mission but also a lengthy one. Players will encounter all types of enemies including two bosses.

It follows the Hunting the Achron mission at the end of which it is shown that the Achron is obsessed with the Remnant city Meridian.

The Achron does not have the knowledge or power to activate the city and Ryder takes this as an opportunity to beat The Achron.

Meet with the leaders of the Nexus and Ryder will discuss his/her plans about taking the Meridian city. While the Nexus leaders will not agree with Ryder, other Pathfinders will support Ryder and will prepare for the mission without the consent of the leadership.

Once you have the control back head to the docking bay area and speak to the other Pathfinders then go to the Tempest.

Now head to the research station and use it to create the required Ghost Storm tech. After this go back upstairs to the meeting room and brief your team before you set the course for Khi Tasira in the Civki system.

Use the Galaxy Map to travel to the Civki system and land in the Remnant City. After landing find the console slightly east of your starting position in order to activate the bridge ahead.

Cross the bridge and open the door and use the terminal that you will found there, a cutscene will trigger featuring a view overlooking the colossal Remnant city. Now you will have to investigate two prominent towers in the city and it is compulsory to investigate them in whichever order you want.

South Tower – Reserch Sector
In the next room, there will be Kett in your path followed by a few remnants. As you reach the command hub take the slope to the right and follow the duct using your scanner.

The path ahead will be long and twisted but there are no turns so you won’t get lost. Just keep following the path and you will face some enemies along the way and activate the tower at the far end.

North Tower: Exploration Sector
Once the tower is activated some Remnants will spawn, deal with them and follow the mission marker. Along the way you will encounter more of the Kett and Remnants, take care of them.

Once they have been taken care of cross the bridge ahead and some more enemies will appear again. As you reach the tower activate the console you find. However, the console will not work as you are required to restore power to it.

Restore Power To The Console
You will need to restore power to the console using four smaller terminals in a specific order. If you get the sequence wrong an assembler will spawn.

Here is the right order, from the large terminal start with the smaller terminal to the right then the left one, then a far right one and finally the far left one. This will restore power back to the console so you can activate the tower.

Go back to the console and activate it and take care of the Remnant that pops up. Keep following the mission marker until you get to a partially collapsed bridge.

The Destroyer Boss Battle
Extend the bridge and jump up to the platform at the end and keep following the damaged walkway to the control room. More Kett enemies will appear along with a Remnant with a new toy, The Destroyer.

The Destroyer has several modes of attacks each suited to a certain range. The Destroyer in Mass Effect Andromeda is equipped with explosives so you won’t be able to stay in cover at one place for long.

Use the outer walkways to stay mobile and safe. Take out the Nullifiers and Assemblers by smartly ordering your squad. Once the smaller ones are taken care of, target the Destroyer’s turrets. Once destroyed it will limit the offensive capabilities of the Destroyer but it will enhance its mobility.

The destruction of turrets will drop its shield to 50 percent. From here The Destroyer will not be much of a problem as long as you are avoiding the close range encounters.

Once The Destroyer is taken care of go ahead and you will reach the central command room. As you enter the Meridian’s central command, interact with the command hub and The Achron’s Sword boss battle will begin.

This boss encounter will test your multitasking abilities. useful abilities for this encounter are Pull (with Radius upgrade), Singularity, Overload, and Tactical Cloak.

Keep the high ground against the Anointed and use chokepoints to set up combo detonations, Omni Grenades, Pull, or a well-placed Singularity.

The third wave in this encounter will include a Fiend which is probably the most difficult part of this battle. It is recommended that instead of focusing on fiend try and take out other enemies including the Achron’s Sword.

Once the Achron’s Sword has been defeated a cutscene will play that will conclude The Journey to Meridian mission in Andromeda and the final mission, “Meridian: The Way Home”, will begin.

That is all for our Mass Effect Andromeda Journey to Meridian Mission Guide with tips on how to get to the Meridian city and how to defeat The Destroyer and Achron’s Sword.