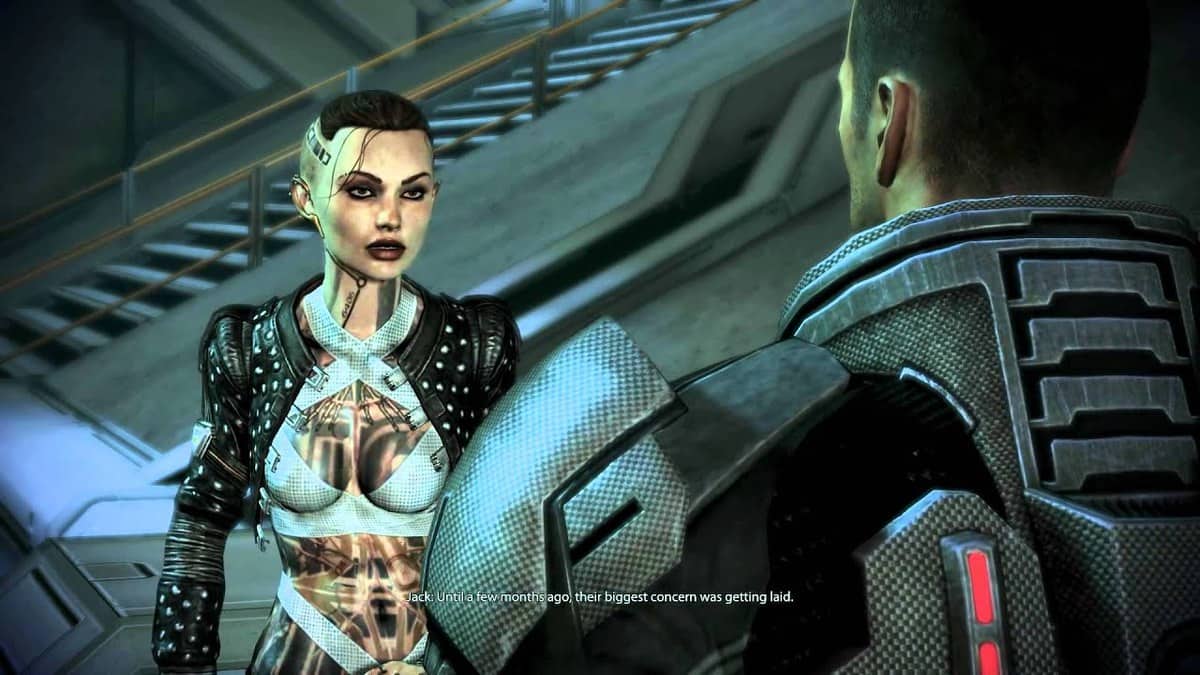 Mass Effect 3 takes a different approach to Romance compared to previous games by rewarding you for your successful romance attempts. In this guide, we have discussed all each Mass Effect 3 Character Romance in detail.

Every time you romance with a romanceable character in Mass Effect 3. You will unlock a cutscene but this time it would be different and may not involve sex.

You need to view these cut-scenes to unlock paramour achievement or trophy. If you are not into achievements, view them anyway!

Among these romance partners, there are few who can continue their previous relationships, and that you can do, by importing your character save file into Mass Effect 3.

Note. Be Warned. There are spoilers ahead!

Following are your romance options in Mass Effect 3:

Short-Version. Ashley is only into males, so if you are playing Male Shepard, you can have a go at her. You will get your chance when she is in a hospital in the Citadel.

Be nice and visit her often between missions to pursue your romantic relationship with her.

How To Romance With Ashley Williams
Walkthrough. When she becomes part of your squad, she will bring up your previous relationship with Cerberus, be careful and avoid renegade responses, especially if you were unfaithful to her in Mass Effect 2.

When she is in the hospital after the Mars mission, visit her often and make sure you give her caring positive responses, and it wouldn’t hurt if you buy her a gift ‘Collected Alfred Tennyson’ from Sirta Supplies.

After Priority: Palaven mission, you should get a private message from Ashley, who has finally recovered from coma and is willing to meet you. Give her that gift you purchased earlier and continue with your positive response approach to her dialogues to re-gain her trust.

After she can walk and that would be during Tuchanka mission, she will send you a private message again. You need to visit her again to keep your romance option open. Or she will be quite bitchy, I tell you!

At the end of the Priority: Citadel mission, Ashley will help you escort Udina, and if you have been playing nice up until this point, she will submit herself.

Do note that, this is your best chance for romance, and if you can’t get her to submit at this point, your road to romance with Ashley has ended?

Finally, you will get to see her before returning to Normandy, and this is when you convince her to stay in your crew. If you have been giving positive responses to her dialogues so far, or have huge reputation points, she will gladly join you.

Complete few missions with her after that and you should soon receive another private message from her, asking you to meet her at the docking bay with her sister. When you do meet her, support her in the conversations. Finally, meet Ashley at the Presidium Commons Cafe on the Citadel for the romance.

Short-Version. Kaiden is only into females so if you are playing Female Shepard, you can have a go at him.

You will get to choose between Ashley and Kaiden at the start of the game, subjected to your choice; one of them will be in the hospital in the Citadel. When Kaidan is in the hospital, visit him often, and you should land a romantic relationship with him.

How To Romance With Kaiden Alenko
Walkthrough. You can unlock romance with Kaiden in the same way as you do with Ashley. Visit him at the hospital, buy a gift (TM-88 Peruvian Whiskey from Presidium Commons shop) for him and when he recovers, he will send you a private message leading to romance.

Short-Version. You don’t get to have any relationship with her, but you can help her get hooked up with Joker. Just talk to her about it on the Normandy.

Short-Version. Talk to him about EDI and be a catalyst for their relationship.

Short-Version. If you are playing Female Shepard, Garrus very much likes you but only if your romantic adventure started in Mass Effect 2. You can’t start a new relationship with him in Mass Effect 3.

How To Romance With Garrus Vakarian
Walkthrough. Talk to Garrus in the Normandy’s main gun battery on the Crew Quarters level after Priority: Palaven. You can commit to Garrus or back out from your old relationship.

After Priority: Tuchnak 2, talk to Garrus in the cockpit of the CIC. He will eventually offer to meet you on the Citadel, where you can commit.

Short-Version. She is a romance option if you had a relationship with her in Mass Effect 2. You can’t start a new relationship; you can certainly can’t start one when you are playing Female Shepard.

After Priority: Rannoch mission, visit Tali down in the Engineering by the drive core. She will tell you about a gift she has left in your cabin.

It’s the photo of Tali without her mask. She will pay you a visit in your cabin the night before the game’s final-missions to thank you!

Short-Version. Don’t worry Commander, she will hook up with you regardless of the gender. You can either start a new relationship with her in Mass Effect 3 or continue your old romantic adventure from Mass Effect 1.

How To Romance With Liara T’Soni
Walkthrough. You need to act fairly early in the game if you are pursuing romantic relationship or continue old relationship with Liara. Talk to her often in her room, and in Presidium Commons before Priority Citadel 2.

Wait for a private message from her about a special project. Go to the Captain’s quarters and invite Liara. This will unlock a cut-scene in which she will explain her preservation capsule idea and article on you. Choose positive responses!

After this conversation, wait for her message. She will invite you to join her on the Citadel. Look for her in the Presidium Commons, on the bottom level on the opposite side of the entrance. Talk to her and choose ‘more than friends’ response, and she will kiss you!

Before starting Priority: Cerberus Headquarters, you will finally unlock Liara’s romance scene in the cut-scenes before the mission. For a bonus cut-scene, talk to her before Anderson during Priority: Earth 2 mission.

Short-Version. He isn’t in your squad but is a romance option. He is your crew’s shuttle pilot on Normandy and is a viable romance option if you are playing Male Shepard.

Talk to him between missions to pursue your romance. You can find him on the Cargo Deck of the Normandy.

How To Romance With Steve Cortez
Pay Cortez a visit early in the game down in the armory to introduce yourself. Ask him personal questions to know more about you. Don’t miss any chance to talk to him and during your conversations he will tell you about the death of his love-mate.

Come back after few missions and talk to him again. Convince him to take a break from his work next time the Normandy docks at Citadel.

When he agrees to take a break, visit him any time after that at Normandy dock on the Citadel. Chat with him and opt for positive responses. After the Geth Dreadnought mission, find Cortez at the Citadels loading docks, by the armored wall. Support him to unlock romance with him.

If you have done all that, he will send you a private message at the end of the game inviting you to meet him at the Purgatory bar on the Citadel. You can either confirm your relationship here or back out – both options are open.

Short-Version. The super-hot lady is back in Mass Effect 3, but you can only continue your previous romantic relationship with her from Mass Effect 2.

She isn’t in your squad or Normandy but is an option if you can somehow import your ME2 character save file.

How To Romance With Miranda Lawson
Walkthrough. Your relationship with Miranda remains long-distance in Mass Effect 3. She will contact you after the first few missions.

Meet her before Priority: Citadel 2 on the Normandy dock. After that, she will send you a private message and invite you to meet her in the apartments of the Presidium Commons. This is your chance to continue your old relationship with her.

Short-Version. He isn’t in your squad but a romance option if you import your character save file to continue your previous relationship with him from Mass Effect 2.

Short-Version. If you are playing male Shepard, you can have a go at her, if your romance started back in Mass Effect 2 (you can only resume your old relationship with her by importing your character save file).

How To Romance With Jack
Walkthrough. Sign up for side-mission Grissom Academy: Emergency Evacuation. During this mission, give positive responses to Jack’s dialogues. After this mission, in the shuttle, when the students start cheering, opt for Paragon prompt that appears.

This should get you on track with Jack’s romance arc. Wait for a private message by Jack inviting you to Purgatory on Citadel.

Meet with Jack and again, use polite responses and make your intentions clear. If you commit to her during this conversation, you will lock all other available romance options.

Short-Version. She is another non-squad romance option for female Shepard. You can find her near the Galaxy Map. Talk to get laid?

How To Romance With Samantha Traynor
Like I said before, She is into females so don’t waste your time if you are playing male Shepard. If you are playing Female Shepard, just talk to her a couple of times during the first few missions, and she will mention her fondness of playing Chess.

After that she will send you a private message offering to visit your cabin. Choose the positive dialogue responses to unlock romance with her.

Short-Version. Get Diana in your squad when you first return to Citadel to start your romantic adventure with her. She goes both ways!

How To Romance With Diana Allers
Walkthrough. Start by asking her to stay on Normandy. You can find her in the lounge of Normandy’s docking bay at the Citadel when you visit it the first time. Convince her to join you on Normandy!

Diana will request private interviews with you after Citadel and Thessia. During the interviews, be smooth and don’t opt for ‘This interview is over’ response; you are good. You can start flirting at the end of the first interview and strengthen your relationship by visiting her on the engineering deck anytime.

You can confirm your romance during the second private interview with her and unlock a cut-scene.

Don’t forget to share your romantic adventures with us in the comments!