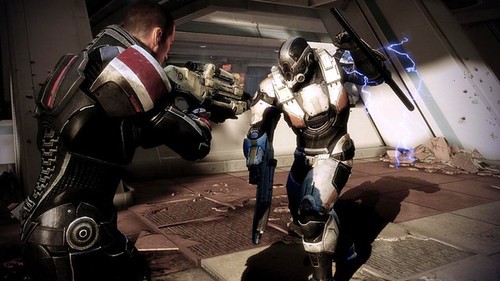 Improving Galactic Readiness isn’t the only reason for you to play Mass Effect 3’s multiplayer. The fun factor is pretty high in this horde-mode styled mp. To ensure wins, we prepared this Mass Effect 3 Multiplayer Character Builds guide.

While it’s a multiplayer mode we are quite accustomed to in the world of shooters (and one we don’t expect RPG games to have), there is plenty of entertainment for anyone looking for some quality co-op gaming.

Perhaps what makes it really enjoyable is the wide variety of races and classes that are for the offer, each with different abilities and each having a standard of their own.

In this guide we’ll be going over the essential builds for every class. I’ll be listing the following things in the builds:

I will NOT be listing the race-specific abilities (such as Salarian Operative etcetera), as these are completely dependent on the needs and choice of the player.

If there is one thing that you really need as an Adept, it is an SMG. Like the Sentinel, the adepts are best when with their abilities, and because of that it is recommended to use lightweight weaponry for the best cool-down.

The Drell are brilliant Adepts because of their amazing agility and the useful powers, they have been at hand. This build will mainly focus on the collateral damage, which you will get from Reave and Pull.

Grenades are 3rd priority items, so there is really no need to waste points in them. Fitness level should be usual; maximizing health and shields. A powerful combo of Pull and Reave, combined with some mid/close ranged SMG damage will ensure you can exterminate anything.

The Asari are perhaps the best Adepts out of the three races. While Warp is a very useful ability otherwise, it does have a significant disadvantage, as it disrupts other effects on the enemy, hence it should be used after throw/stasis combo.

Throw is quite useful against unarmored players, but is almost useless against those with barriers and shields, so make sure to use it either in conjunction with Stasis, or on enemies with no shields.

Stasis is particularly useful if you have been annoying phantoms closing in on you, and is perhaps one of the best support abilities around.

Prioritize human adepts below the Asari and Drell, as they are relatively lacking when compared to the other races. Though Singularity is one of the most compelling powers in the game, its usefulness in the multiplayer does not match up to that in the single-player.

It isn’t effective against enemies with barriers/shields and acts better as a controlling power rather than a damaging one. Additionally, the effectiveness is exacerbated if warp is used after this, as it will disrupt singularity effects.

As an engineer, you won’t be going into the heart of the fight. Instead, your job is to deploy a drone, overload some enemies, and then sit and watch the show as the drone decimates enemies in front of it. Of course, it’s simple in theory, but that doesn’t mean it’s inapplicable.

Human engineers are the only type of engineers you should be playing. This is because the other two i.e. Quarian and Salarian, do not have the adequate powers to be as effective (Salarians aren’t too bad, but humans will always be better.

Quarians are absolutely useless). Combat Drone is almost useless when it comes to damaging. This is because its detonation is uncontrollable at tier 6, and will almost never explode when required. That’s why there is no point of investing much in it.

Overload and Incinerate are your go-to powers. Chain Overload after Incinerate can really destroy enemies’ shields and leave the badly exposed. Sadly, the engineer alongside with sentinel is a little weaker and more difficult to play with as compared to the rest.

Drones don’t really do much damage so you need to level up most of that yourself in this build. Incinerate is one of the best powers in the game especially for the armored targets so buff up on that as well

The Infiltrator excels at taking enemies by surprise with its amazing cloaking ability. Combine that with the infiltrator’s prowess as a sniper and you get a complete assassin.

Infiltrators are generally best at doing indirect damage. And a sniper with an infiltrator is an absolute must. In multiplayer, the Salarian Infiltrator alongside the Asari adept and Human Vanguard are considered the strongest class type.

Self-explanatory build. The Cloak is the key here, as always with the Infiltrator. What truly makes it a commendable ability is that it can be combined with Drain for defensive maneuvers without actually compromising your stealth.

This is truly where the Salarian Infiltrator stands out, and due to the tier 6 selections for cloak, players can use the combination when in dire situations, particularly against lethal close-ranged enemies without exposing themselves. Apart from that, your main source of damage is the trusty sniper rifle.

Though the Salarian is the key choice as an infiltrator, the human race is nearly just as effective. Sure, you have no drain, which makes you a little more vulnerable and a little difficult to destroy enemy shields. However, you do have Cryo Blast.

Though it isn’t very effective against protected enemies, this baby can really make even the most intimidating foes freeze once they lose their shields – very useful against annoying enemies like the phantoms.

If you ever thought why on earth infiltrators always played so well, it’s because you really can’t go wrong with one. All three races are nearly equally balanced (although I say Salarian Infiltrator beats the other two slightly).

The Quarian infiltrator is perhaps better than the human because of Sabotage, which is very effective irrespective of the shield status of the enemy. That, alongside with the ever-loved cloak, is your key to success.

As a Sentinel, the key thing to keep in mind is that you have no weapon specialization whatsoever. This can be a massive advantage or disadvantage, depending on your methods of use.

To make it advantageous, it is recommended that you use fewer weapons to really give you seem cool-down bonus, as the Sentinel has the most effective biotic and tech abilities to his/her disposal, and completely relies on them.

With this build, you’ll be relying on your abilities, which is the way to go as a Sentinel. The added advantage of cool down reduction bonus will allow you to spam abilities like crazy here. Because of that, we take Chain Overload for Tier 6 instead of Shield Damage, which is the usual choice as it cripples enemy shields.

You can truly spam warp like crazy with this ability as well. However, Overload becomes less useful in the later stages of the game, which is when the Sentinel seems to get in trouble, as lack of weapon variety and lower damage can become rather unsettling.

While many tend to minimize the recharge speed of Throw, it is actually best to do instead maximize the amount of damage it does, is this will be your main ability as a Sentinel Human.

Tech Armor is almost forgettable as far as its active is concerned, and Warp should only be used as a preliminary to throw. Once again, you’ll struggle a bit in the later waves, but that’s what we have a shotgun for, right?

Ah, soldiers – this is the vintage class that everyone will recognize. There are quite a few options for a soldier, and like the Sentinel, the soldier class has good durability and an answer for nearly all situations.

Of course, they won’t be as rapid damaging as Vanguards, but force and weaponry will do you quite a bit of good as long as you’re shooting often.

Weapons: Shotgun and any other weapons of your choice

This build focuses on weapons and melee. When you’re too far, you can rely on Carnage and sniper rifles to do some good damage. If you get bored, you can rush into the enemy, take out your shotgun and start shredding some meat and melee anyone, and anything that you get the chance to.

You’ll really be giving yourself a pat on the back when you take out those nasty phantoms with a melee hit. And yes, the bayonet helps quite a bit. If you happen to lose your shields in the process, then no worries, as you have good old fortification just waiting to be used. Being a Krogan helps too.

The Human and Turian soldiers are significantly worse than Krogans. The only reason a human build is being offered here is because many actually start off as human soldiers. Adrenaline Rush has its uses, but it’s an ability that won’t be coming too often, particularly since you should be carrying multiple heavy-weight weapons (rule of thumb as a soldier).

Frag Grenades are nearly useless, in my opinion; throwing one with absolute accuracy is a pain, and Concussive Shot is a poor replacement for Carnage. As a human soldier, make sure to use A-Rush whenever it is up, and you are facing tough enemies. Otherwise just rely on your weapons.

Vanguard is perhaps the more aggressive class available, and one of the strongest classes in multiplayer. Vanguards sacrifice defensive skills for more serious offensive abilities, of which the main two are Biotic Charge and Nova. Combine them in a combo and you’re a walking death-bringer.

I see no reason to go for a Drell or Asari Vanguard; they are significantly weaker than a human variant as they lack Nova. Human Vanguards are nearly invincible when in the right hands. They are easy to play with but slightly complex to master, merely because it requires timing, awareness, and most importantly bravery. Being brave is 50% the job of a Vanguard.

The remaining half is Biotic Charge+ Nova. Thanks to the amazingly low cool-down because of just on the pistol, this is a combination that can be spammed, to a degree, that would make others team members gasp in both awe and jealousy (unless you are playing Silver/Gold, which just requires more thinking).

This is a little bit different build as it is a solo build, she is a fragile character to use (Alaria) so you need to have more barrier restore options. You need to go six slots and full damage on grenades and do not hold back on these

Don’t forget to share your favorite builds with us. It may help someone!