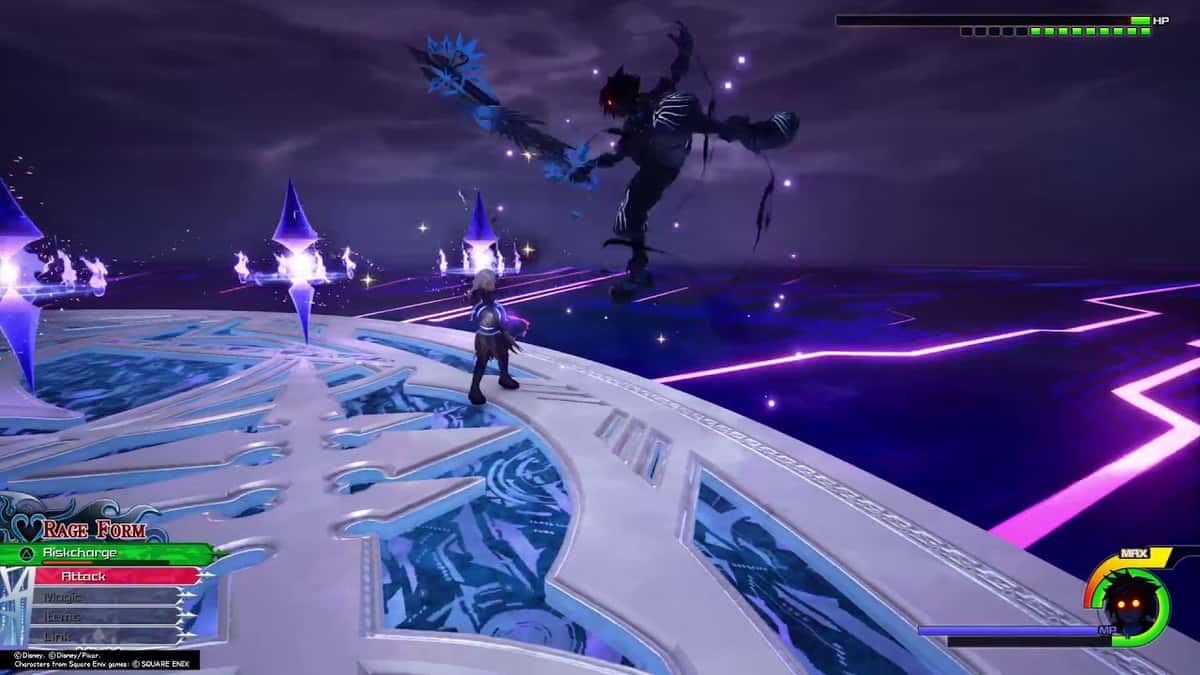 To beat Data Riku Replica in KH3 ReMind you are going to require some strategies along the way. In this Kingdom Hearts 3 ReMind Riku Replica Boss Guide, we will show you how to win this fight.

Since you are on your way to fight quiet a powerful boss, make sure that Sora is on level 80 or above because you have to be as strong as you can.

The item can be bought in the Moogle Shop in Twilight Town. The effect of the item is, when Sora’s health reaches zero, it is going to restore is back to 100.

Glide: Press and hold the circle button while in the air to glide.

Block: Press the square button which will guard you against frontal attacks.

Final Blow: Press the X button after performing a reprisal attack to instantly move next to the enemy and continue attacking.

Payback Strike: Press the X button after a successful aerial recovery to attack enemies with a flurry blows.

Leaf Bracer: Always finish casting recovery magic, even if you are hit by attacks in the process.

Withstand Combo: Always retain at least 1 HP if you are hit while you have 2 HP or more. You will remain protected throughout the enemy’s combo.

Second Chance: Always retain at least 1 HP if you are hit while you have 2 HP or more.

MP Haste: Recharge MP 10% faster when it is depleted. Stack the ability to increase its effect.

Damage Control: Halve the damage you take when your HP is at 25% or below.

Explosive Core
In this attack, Data Riku Replica releases crystal-like objects around him that explode on contact.

Slash and Run Assault
In this attack, the Data Riku Replica goes into an instantaneous movement while dealing with rapid slash attacks.

Red Shockwaves
In this attack, V-shaped red shockwaves are shown up in the area four times. Sora has to get dodge the fourth shockwave otherwise it will give Data Riku Replica a chance for a follow-up attack.

Sky Raid
In this attack, following the shockwaves, Data Riku Replica will ascent above and unleash a wide range of lightning attacks.

Omnidirectional Guard
In this attack, the Data Riku Replica has the capacity to null all attack when he uses his guard ability.

Dark Aura
In this attack, the Data Riku Replica covers the whole screen in darkness. Then, he continuously unleashes his slash attacks to Sora.

How to beat Data Riku Replica
Data Riku Replica will be teleporting from one place to another in means of no time and will be hitting you with his melee combos and swift attacks.

The Shockwave attack of Riku is unblockable so you need to dodge it in order to keep yourself from the damage.

Avoid using any attack if his Omnidirectional Guard attack is activated as your attack will be reciprocated by another one.

Once you hit him, keep hitting and don’t give him time to recover as it might give him time to throw him attacks on you. If Data Riku’s shield is up then you might consider dodge his attacks and not attack him until his shield wears off.

Once you defeat Data Riku you are going to get Power Weight as reward. These grant a moderate boost in Strength (Strength: 3)