Update: As expected, this memo is FAKE.

Original Story
Zenimax Media is taking necessary precautions to stop its employees to talk about the future projects its flagship studios are working on, especially Fallout 4 and Elder Scrolls VI.

In an internal memo which somehow found its way online, Zenimax has prohibited its employees to talk about or reference any of these terms:

Below is the Leaked Internal Memo: 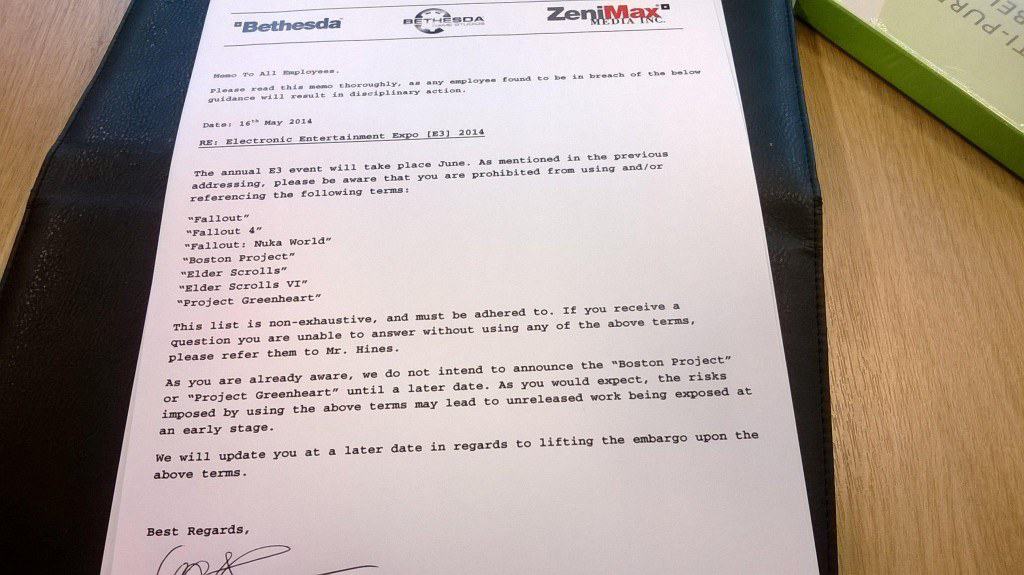 The memo advises employees to refer all the questions to Mr. Hines if they are unable to answer them without referencing these terms. What’s interesting is the emphasis on ‘Boston Project’ and ‘Greenheart Project’ which the company doesn’t intend to announce until a later date.

If you remember last year’s leak, Fallout 4 is presumably set in Boston.

If we go through the list of prohibited terms, Greenheart Project may well be the next Elder Scrolls game being developed by Bethesda.

The reason behind prohibiting employees to talk about these projects is simple, Zenimax doesn’t want ‘unreleased work being exposed at any early stage’.

Fallout 4 has been the subject of many leaks in recent memory, fans are desperate but Bethesda isn’t budging on the issue.

Although this memo may as well be another false alarm just like Survivor 2299 but if Bethesda is indeed not going to talk about these games at E3, which seems to be the case if you believe Pete Hines, it shouldn’t be a surprise if we do not hear about Fallout 4 or next Elder Scrolls game this year.

@iTz_Reaper 1) I don’t reallly pre-announce our announcements. 2) BGS will not be talking about its next game for a long time.

We have contacted Bethesda for comment. We will update if we get anything on that!