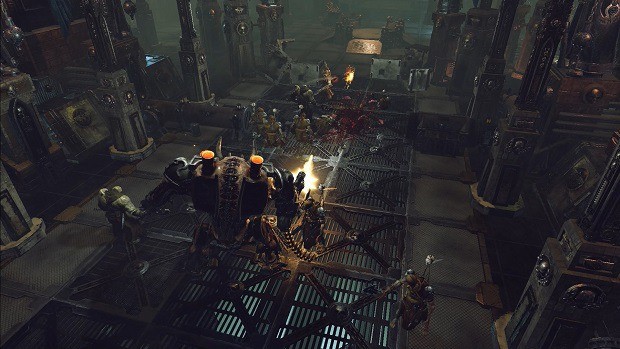 The game has two modes of difficulties. We recommend starting with the lower one as you will be learning first instead of taking care of the challenges.

Thankfully, you can switch the difficulty in the middle of the campaign. Therefore, whenever you feel like you have mastered the mechanics of the game and are looking for a tough challenge, select the higher difficulty.

First, you will need to select a class which suits you best. Do not worry since there is no actual way of knowing the fact that which class will be best for you, you can attempt to try out every one of the classes.

Use the very first mission for this purpose and replay the level with each character until you find a proper fit for your playstyle.

Ammo for weapons is infinite so you will not need to worry about that. However, health sources like medkit are limited and you will have to replenish your health quite often so for that purpose it is quite favorable to explore the mission area. You will not just be able to acquire crucial items but other rare and additional ones in the hidden chests.

Players should test all of the character classes and specializations that are available during this mission. Also, some classes may not exactly be the same in practice as their descriptions sound. You should play all of the classes in the first mission just so that you’re sure if it suits you or not.

Make sure that you’ve chosen the apt difficulty level from the game. There are two levels to choose from.

You can change these during the rest of your gameplay as well.

For starters, you should go with the lower difficulty level so that you can easily understand what the game is about without having to deal with any stress

Each chapter of the main story missions is accompanied by several Investigations. Each Investigation gives you a clue or a piece of the puzzle for the bigger picture.

Completing all Investigations for a given story mission will mean you have completed that specific chapter. More information including the percentage completion of investigations can be found on the Investigations tab in the game’s menu.

A higher rank will allow you to acquire new skills and upgrade existing ones.

It will also increase your reputation among the NPCs so that merchants offer better equipment and weapon-smiths can forge better weapons. Moreover, you also open new areas that are ripe for exploration in the Caligari Sector.

Speaking of the map, the Caligari Sector is divided into sub-sectors which will unlock as you rank up more.

Each sub-sector has various planetary systems with their own set of challenges and enemy types. Next to the name of each planetary system, is a description for how many enemy units it has, and how strong they are relative to you.

Within each system, you have got many planets some of which will carry quests of varying difficulty levels.

Again, get to know more about these quests by choosing a specific planet in the orbit. Always go for the quest that is matching your rank, so you do not get overwhelmed by the tough enemies.

Acquiring skills via Heroic Deeds
As you complete the investigations and various set of unique challenges, you will eventually acquire Heroic Deeds.

The requirements for unlocking each will be displayed in a menu in-game. There is a total of 115 of these bad boys. These are trophies which come in three categories:

Since most of the Heroic Deeds require tasks being accomplished by the different character classes, you will need to play the game several times if you are in it for unlocking all the Trophies.

These are awarded as you complete main missions, side quests, and investigations. Each gives you a set amount of points which vary according to the complexity of the task and the map size in that sector. Information regarding the points is given in the Mission Panel.

Once you unlocking the Crafting ability, you will be able to utilize these Fate Points in developing new tech as you head down the ‘Tech’ tree. This, in turn, rewards your playthrough with newer facilities and equipment.

Your primary tools will be inquisitorial weapons in the game. Every character can access two sets of weapons with the ability to switch between the two at any point.

Every equipped weapon will allow you to have 4 abilities. Each set of abilities consists of two standard attacks which are operated by the mouse buttons, along with two special attacks that are defaulted to keys 1 and 2.

In dual wielding, characters will be able to access the full set of attacks if the weapons belong to the same class.

There is an ultimate ability as well. This depends on the type of armor that the character has equipped. There are three types of armors that belong to three classes.

Lastly, there is a gadget with limited charges as an ability. This depends on the item that is equipped. These gadgets can be offensive or defensive.

It is important for players to manage their weapons and ammo instead of just spamming them along with the abilities.

The guns can also overheat and stop you from shooting until the weapon cools down. Some abilities can also not be used if the ammo falls down to a certain number. Make sure you reload whenever you get the chance. However, the character has infinite ammo in the game.

Players can observe a mission’s difficulty with the help of this numeric value. This tracks the character’s gear progression as well.

The value is attached to every mission, which notifies players about the minimum requirements for the mission.

If a character has a higher set of prereqs for the mission than what is required, they will have a higher damage output and sustainability.

An opposite affect takes place when the character doesn’t fulfill the requirements of a mission. This makes the mission more challenging.

Crafting allows players to optimize their character gear. The materials can be gained from missions or useless gear. Tech trees can enhance the crafting system.

Characters can also be customized cosmetically through the crafting system. This system is not accessible at the very start of the game.

In order to trade or mail, right click on your character’s portrait and select the mailbox option. This can come in handy because you can use the mailing option to send or receive items with no restrictions.

Players can know what harmful effects their character can withstand by the Suppression Resistance bar. This is on the bottom left corner of your screen.

The green color means that there are no combat penalties. This means your character is protected.

The yellow color represents suppressed, meaning that your character will be slowed, knocked back, blinded and, shocked.

The red color means overwhelmed. At this stage, your character will be knocked down, stunned, restrained, and frozen.

Each character can unlock an Inoculator for them which will allow them to utilize some abilities which boost various attributes.

The feature is introduced in the game once you speak with Magos Biologis on the bridge during one of the missions.

This opens up a menu in the game where you can see the many upgrades available for your Inoculator and so you can choose accordingly.

This will require you to search for Inoculator units hidden in boxes around the world so to reactivate the Inoculator. The abilities provided are:

This is all we have in our Warhammer 40,000: Inquisitor Martyr Guide. If there is anything else that you would like to add, let us know in the comments section below!