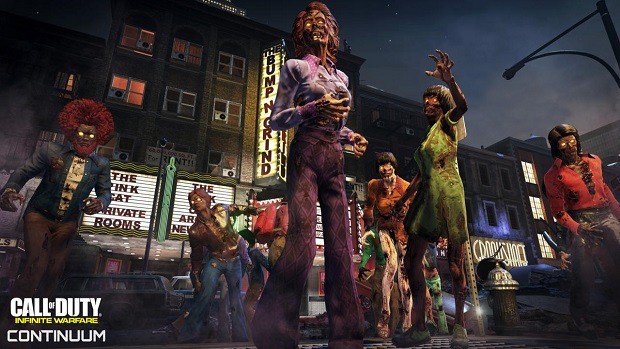 Infinite Warfare Zombies Shaolin Shuffle Power Switches guide will help players in finding all the switches and turning them on to fully power up the map, just like Zombies in Spaceland.

Like every other zombies DLC in Call of Duty games, the latest offering Shaolin Shuffle also requires players to find and turn on Power switches in order to progress or access certain areas of the map.

In Infinite Warfare Zombies Shaolin Shuffle, there are four switches which the players need to enable to unlock all sections of the 1970s New York map.

The power grids aren’t localized in Shaolin Shuffle so to light up the entire map, players will need to find all four switches and turn them on to fully restore power to the area and complete the DLC content.

The first power switch is located in the area where players first spawn. The switch is to the left side of the spawn area, on a pillar near the subway car. Once players have turned it on, they can proceed forward through the map towards other switches.

The second Shaolin Shuffle power switch is near the Rooftops section of the map. To reach this, players will need to exit the subway, go up the stairs and look for a store on the street called Keeble Geebles. A left turn next to the building will take players up to the rooftops. Once one the roof, players need to go through the door next to the Racin Stripes vending machine.

This door will lead players to an exit where players need to turn left, head to the metal gate that leads to the stairs and from there, a right turn will lead the players to the second Power switch.

The third Power switch is on top of the disco inferno building. Once players leave the Subway spawn area, they need to go across the alley and then take the stairs up to the disco room. Players need to continue on to the roof of the building from the disco club where the power switch will be easily visible next to a door with the thunder sign on it.

The last Power switch is on the other side of the Subway spawn area. To get there, players will need to find the subway entrance near the 3rd power switch. Once players enter the subway from this area, they will find the switch in a corner of the tunnel.

This is all we currently have on Infinite Warfare Zombies Shaolin Shuffle Power Switches guide but if you would like to add more, share in the comments below!