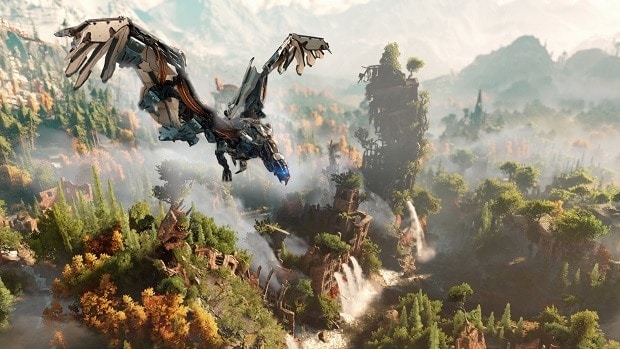 The combat system of Horizon Zero Dawn isn’t difficult to master, but it can get frustrating if you don’t know what you’re doing. Luckily, there are plenty of tools at your disposal which you can use in order to make it relatively easier.

In our Horizon Zero Dawn Combat Guide, we’ve detailed everything you need to know about mastering the game’s combat.

In our HZD Combat Guide, we’ve detailed everything you need to know about mastering the game’s combat.

Focus is Your Friend!
Focus in Horizon Zero Dawn is probably one of the best tools at your disposal. It basically allows you to completely analyze a machine and learn about its weak spots, elemental weaknesses, route, level, and more.

Knowing all these things should give you a clear idea of how you should approach a battle or whether you should engage in the first place. It’s a good idea to make a habit of using Focus before engaging in battle.

You can target certain parts for additional damage and even break off components such as Radar and Turrets to strip them of their abilities. You can even use the broken turret and direct fire and the machine itself.

Moreover, there are four different elemental damage types in the game i.e. Freeze, Burn, Shock, and Tear. Having a good understanding of your enemies’ elemental weaknesses and exploiting them is probably the best thing you can do.

During the early game, most of the machine are weak against Burn elemental damage but it changes as you progress into the late game. Therefore, try of have different types of Weapon Mods available and exploit the machines’ weaknesses.

Machines can even be immune to certain types of damage. You must correctly recognize the machine’s weakness using focus.

You can also check out our guide on How to Exploit Weaknesses for more details on the subject.

Stealth Isn’t Too Bad
Provided that you have appropriate skills, you can approach a battle in stealth and emerge victorious most of the times. This technique basically involves analyzing a machine and using things like traps and stealth techniques to take it down.

Moreover, using the technique has its perks. For instance, bringing variety to how you approach combat has benefits such as increased XP. However, it’s important to note that not all machines can be eliminated in stealth.

For instance, there are some machines which will immediately notice you if you try to hide in tall grass. Lastly, as mentioned earlier, you need to have appropriate skills if you wish to use this approach.

Use Traps and Other Forms of CC
As you progress through the game, you’ll come across machines who like to roam together. While you can try to separate them if you’re careful enough, doing so can be pretty hard at times.

This is where using traps and other forms of Crowd Control comes into play. Forgive me for mentioning it again, but Focus is again your friend here. You need to analyze these machines to learn about their routes and then place your traps accordingly.

Blaze traps have a favorable ability in it that they have a perimeter trigger. Machine getting near it trigger the trap and blast.

Moreover, it’s a good idea to maintain a safe distance; some place where these machines can’t reach you. In addition to your own traps, you should be able to utilize environmental traps that can aid you. All in all, keep your eyes open, analyze the machines, and you should be good to go!

Slide to Evade
As useful as the jump and roll are for evading ranged attacks, they are slow and time consuming. The amount of time it takes to complete a jump and roll is just not very effective as it takes some time for you to stabilize after it is not very feasible.

Instead, use slide when sprinting by pressing square when on a sprint. This is much quicker and allows you to take cover by quickly sliding behind it when the attack is approaching.

Gather Around
Resources are the most essential commodity for combat, be it scrap items, materials or medicinal herbs. You’ll need resources to craft ammunition, make traps and heal yourself using the herbs.

You’ll find that most machines do not go down very easily and you’ll have to expend a lot of ammo to cause some considerable damage. That’s what you need to gather for. Traps are as additive ease in the combat as you read earlier. You must craft and stock up on traps as well.

Make sure to take time to gather material before going head on against a giant machine. Kill some smaller machines and ravage their bodies to get Wires and gather Wood lying around to make use in ammunition.

Similarly, medicinal herbs also essential for combat. You won’t be able to defeat a giant machine with just one health bar. You’ll have the need to heal yourself time and again to carry on battle. Medicinal herbs gathered up are a good but staging a fight in a field abundant in herbs is especially game changing as you never know how long the combat will last.