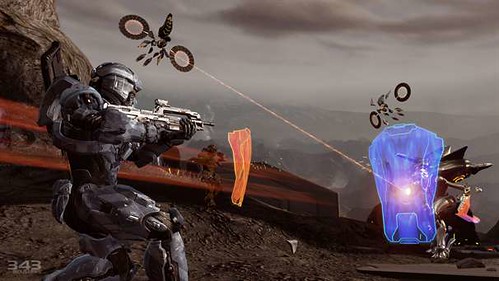 Latest Mjolnir GEN2 armor in Halo 4 allows users to add up pieces of hardware (armor abilities) that can improve their efficiency accordingly in the battlefield. If you are wondering what these are, read this Halo 4 Armor Abilities guide.

For more help on Halo 4, read our Support Upgrades, Vehicles and Weapons Guide.

Hardlight Shield
The proton emitter on the Z-90 Hardlight shield fuses light particles into a strong shield, protecting the wielder, in exchange for mobility.

Hardlight Shield is a strong barrier that can defend you in the utmost firefight heat. Although the barrier will slow you down a bit, but if you have multiple targets to deal with, this barrier can save your life.

You can also the it to protect yourself against the explosive damage or to guard your teammate just beside you. The shield is strong, but you can’t consider it as an invisible tool and always hide behind so you will have to use it tactically.

Hologram
The hologram ability will let you produce a decoy of your character who can create disturbance in the enemy ranks. In Halo 4, these decoys are more effective they will be marked red on enemy radar, and the reticle will also turn red. So if you want to draw the enemy fire away from you, this ability is what you should be looking for.

Promethean Vision
You want to see through walls? The Promethean Vision is the ability you should be equipped with. Just like a thermal goggle, it will allow you to see the enemies through any solid object. The ability can come in quite handy in objective based matches.

It can detect any moving enemy. However, the player using this ability is exposed due to the high sound it emits, a red light on the helmet and a red wave produced due to motion tracking.

Thruster Pack
The Thruster Pack will allow you to thrust your way forward for a small distance in a single direction. The armor ability is useful for both aggressive and defensive tactics.

You can close down the gap between yourself and the target or even reach the nearest cover in a blink of an eye. It can also help one evade the grenades without being harmed.

It will not only target enemies but can also serve the distraction purpose. Enemies usually will try to take it out first before they target you.

Active Camouflage
If you are not moving, you will be almost impossible to get spotted. Those who like the stealthy approach are going to love this ability. The ability comes in quite handy when you have to defend something in a closed structure.

If you are patient enough, you can also use it to infiltrate enemy ranks without being spotted.

The camouflage is governed by the energy bar. When activated, the bar depletes slowly when the user is at rest and much faster when the user is in motion. This makes it a perfect ability for snipers.

It also acts as a Radar Jammer, causing many red dots to appear on enemy radars in a 25 meter radius.

A downside to this ability is that the sound to the user are heavy muffed, making it difficult to spot grenades and other shooters

Regeneration Field
This is my favorite. Almost makes you a medic. With the regeneration field, you will be able to regenerate not only your own health but also the health of your teammates. A good ability in scenarios where team work is crucial.

If the player gets shot while inside the field, the regeneration may stop for a bit before continuing.