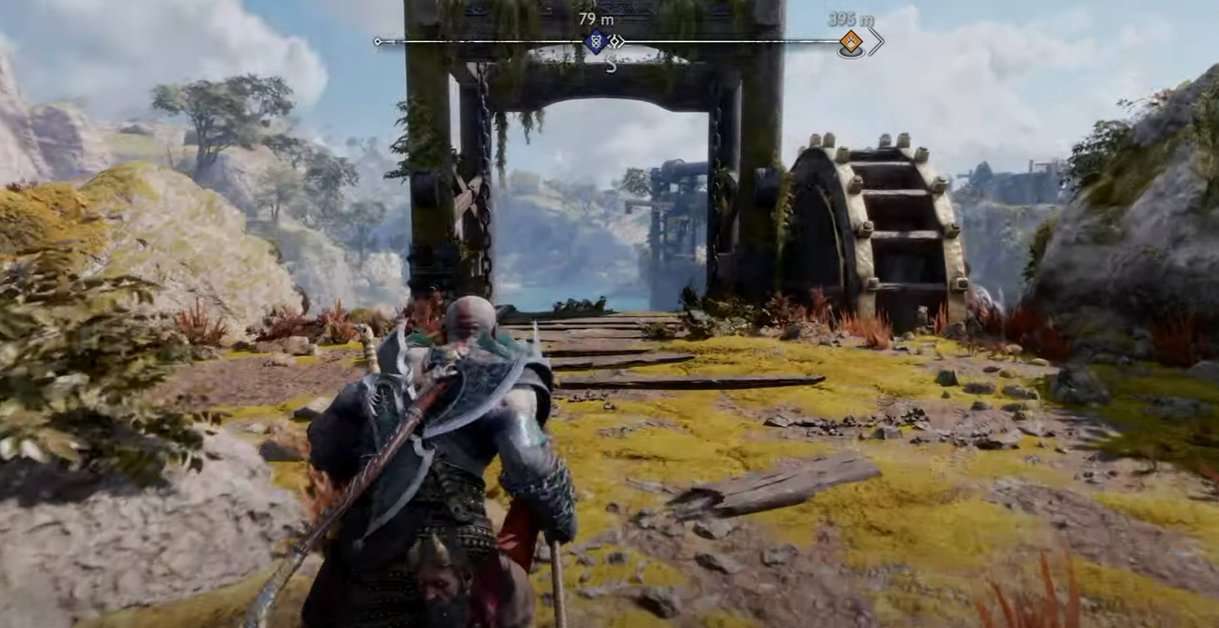 Are you, too, finding it difficult to complete the favor called ‘The Lost Treasure’ in God of War Ragnarok? Don’t worry, we have got you covered. Read on to know everything about The Lost Treasure.

It is highly advised to only come near to this quest once you have completed the Weight of Chains favor. You are going to need a Draupnir Spear which can be obtained by completing Main Mission 10: Forging Destiny.

To start The Lost Treasure favor, you would need to talk to the spirit of Elder Wayfarer on the bridge on Dragon Beach.

The spirit will ask you to find out about his lost son. They both came to this island in search of a treasure but somehow got lost. Now the father is dead and his spirit is asking you to find his son. When you accept, the favor starts.

There are four parts to this favor. Which are explained below:

Find the Treasure in Alberich Hollow

Jump to the platform that is right behind you. Keep going on the wooden platform until you come across ruins.

There will be guards that you need to take down first. On the left will be a cave, right after you have crossed that wooden platform.

There will be debris in the cave that you can clear by bombing them with fire. You will find fire bombs in the cave. Just pick them up and throw them on the debris.

Keep an eye out for chests of debris. You will find several items in the chests.

Keep going deeper into the cave. You need to find the treasure in Alberich Hollow. There will be several debris blockages in the way, throw bombs on them to get cleared.

You will come across a mini-boss ‘Ormstunga’ eventually. You need to take him down to progress further. But this is not gonna be easy because the agility of Ormstunga can be troublesome.

Don’t try to take him down all at once, just hit him a few times then back off. He is too fast that you need to quickly dodge his attacks. He would spit venom on the ground too, which can easily be dodged.

Even though he is fast, your tactical movement and attacks would get him.

After you have killed him, there would be a ledge on your left. Just get on that to get the Yggdrasil Rift. You would see another debris through the gap between two giant rocks.

Clear that and go there. You will find the treasure in the legendary chest. Now go to the right wooden platform and you will find a treasure map lying on the floor. Acquire that and the first part of the favor will be finished.

Go ahead and use your spear to climb up the higher platform. You would find his son dead. When you go near to him, his spirit will appear. Talk to his spirit.

He would tell you that in search of a treasure, he died. He is sorry to be parted from his father.

Find the treasure on Alberich Island

After talking to the spirit, head to the right, and smash the stone on your left to clear the way.

You will find out that the water wheels are not getting any water. Just head down and see if you can clear any rocks with your spear. Throw your spear on the rocks to destroy them.

There will be a ledge, just get on it and through the gap between two giant rocks, you will see another Odin’s Raven, kill him. Now look back and there will be a glowing spot on the giant rock. Hit it with your spear to destroy it.

This will enable you to pull the chain that is a bit further to the right. Pull the chain and then freeze the spinning wheel. Get on the elevator to the left of the wheel.

Return to the father’s spirit

Now you need to inform the father’s spirit about his son’s fate. Return to the dragon island, from where you started this favor. Get on the bridge and meet the Elder Wayfarer spirit and inform him about his son.

This will conclude The Lost Treasure side quest.