How To Defeat Frost Phantom In God Of War: Ragnarok 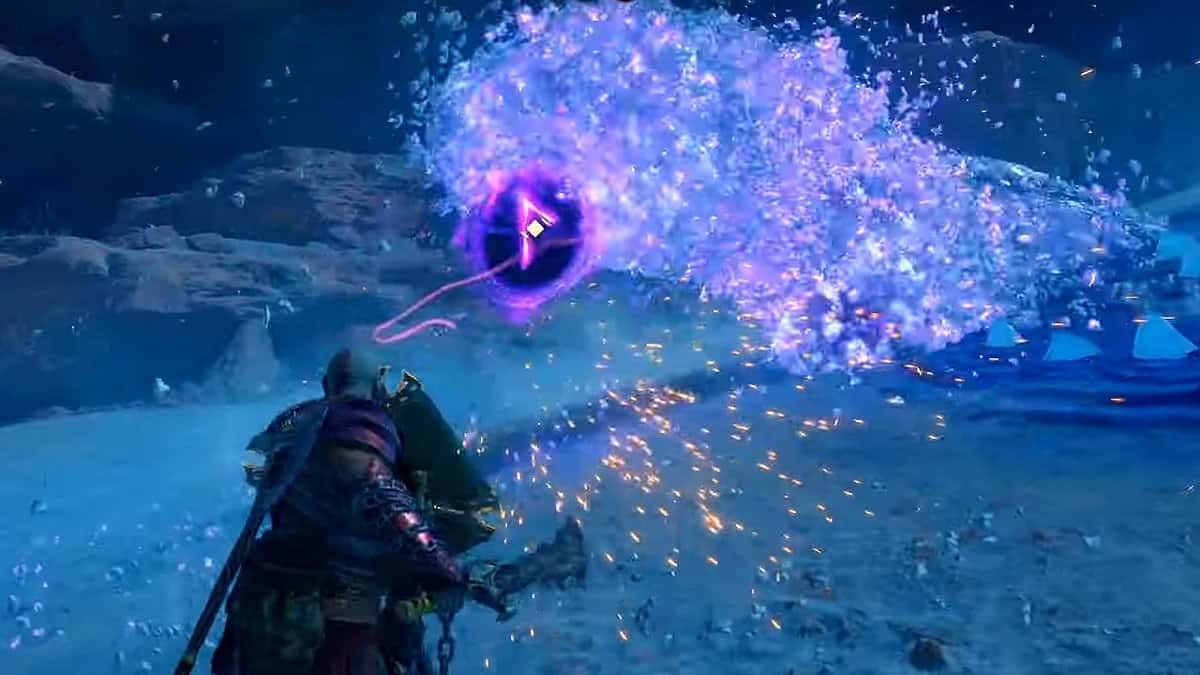 The Frost Phantom is a primordial, magical creature that you will face as a mini-boss in the latter chapters of God of War: Ragnarok.

These ancient creatures use frost magic to draw energy from nearby Runic Springs. They are completely immune to all sorts of damage and the only way to defeat a Frost Phantom is to first take out its source of energy—Runic Springs.

The following guide will tell you more about what kind of attacks the Frost Phantom does and you can build its stun meter in God of War: Ragnarok.

You will encounter The Frost Phantom while heading toward the Norns in Midgard during The World of Fate chapter. When you enter a clearing on the way, free the second Hafgufas near the reddish rocks to spawn The Frost Phantom.

There are two phases to your battle with the Frost Phantom, so we will be splitting all of its attacks between both phases.

Swiping attack by the tail: You must be careful when close to the Frost Phantom. If you are within its melee attack radius, it will try to strike you down using its tail for a swiping attack.

You will know the attack is coming when it lifts its tail. You cannot block the attack, so protect yourself by dodging.

Orbs attack: Forest Phantom can attack you using orbs. If you stand stationary, the orbs might inflict severe damage on you.

The ability is easy to understand as Frost Phantom forms a circle on the ground, indicating the impact area from the orb.

You can either block or dodge the throws.

Tidal Wave Attack: This attack is one of the strongest coming from the Frost Phantom. It will jump into the air before crashing into the ground for a massive AoE wave attack. There’s no way to protect yourself if you get caught in its range.

You will know the attack is coming when the boss rises in the air and forms a wave-like structure. When that happens, evade.

In the second phase of your fight, you will face some new attacks from Frost Phantom.

Slam Attack: Frost Phantom only carries this attack if you inflict melee damage or stun it. After being damaged, it will use its tentacles to land a massive blow on the ground, causing AOE damage to anyone present within the radius of the attack.

There will be glowing rings on the ground covering the area of the radius, making it easy for you to dodge the attack and move away from the site.

Shock Wave Attack: One of the most potent attacks from Frost Phantom is himself crashing to the ground. This will cause severe damage if you are present in the area of damage and the radius of this attack is vast.

Frost Phantom rises in the air before launching to the ground. Dodging the attack is the only way to go and run as far as possible.

Explosive Orbs Attack: Frost Phantom will activate orbs in different locations after rising and landing on the ground. These orbs also have AOE and deal substantial damage if you are in their area.

Frost Phantom uses its arms to activate the orbs, slamming his hands on the ground, indicating the incoming orbs’ attack.

You should move away from the glowing areas, protecting yourself from the damage.

How to beat the Frost Phantom

The success in defeating Frost Phantom lies in ranged attacks. Never get too close as its melee blows will be deadly for you. Stay on the run and find chances to damage the core of Frost Phantom.

The priority is to deal substantial damage to the core at every opportunity. This way, you can stun Frost Phantom, finishing it off.

Always ensure that you are safe from its AOE attacks, and they are tough to block and drain much of your health. Never try on offense when he attacks you using AOE slams or orbs.

It is also essential to have your Leviathan Axe with you at all times, so you can throw it toward the creature’s core and swiftly end the fight. Look for the opportunity and inflict as many shots as possible when the core of Frost Phantom is glowing. During this time, your damage output will be more. Leading to faster stun and death of the Phantom.

During phase one of the battle, try to deal maximum damage and fill the core stun bar so you can destroy the glowing purple spring. This will ensure that the health bar of the Frost Phantom goes down by 2 bars and then do the same in phase 2 to finish off the Phantom. The success lies in constantly dodging the attacks, keeping your distance, and striking the core whenever you get the opportunity.

If you are struggling with your health, look for Healthstones scattered throughout the area where you encounter the Frost Phantom.