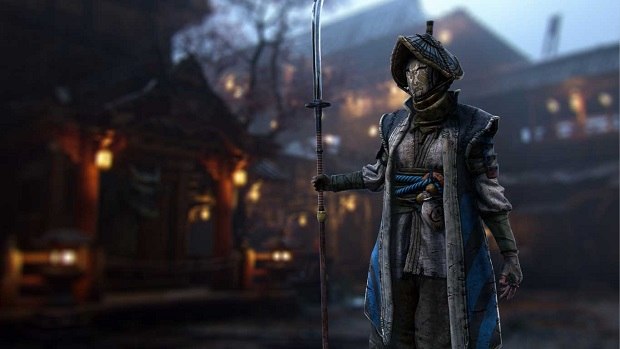 For Honor Nobushi Guide to help you learn everything you need to know about playing as Nobushi, playing against Nobushi, and tips to win.

For Honor Nobushi is easily one of the most flexible heroes in the game. One of her most important tools is inflicting bleeding and dealing more additional damage to bleeding heroes.

Due to this, you need to ensure that you continue to inflict bleeding in order to deal the maximum amount of damage. This should allow you to whittle down the HP of any hero in the game.

Her weapon, Naginata, has a ridiculous range and is pretty effective against short-range heroes. Moreover, her kit allows her to remain at a safe distance throughout a fight and naturally gain an advantage.

In our For Honor Nobushi Hero Guide, we’ve detailed everything you need to know about playing as Nobushi and playing against Nobushi.

For Honor Nobushi Way of the Shark

It’s basically Nobushi’s passive which allows her to deal increased damage to bleeding heroes. Since most of her attacks inflict bleeding, you need to utilize this passive for the maximum damage output.

Without utilizing her passive, you can’t hope to deal any significant amount of damage to opposing heroes.

This attack can’t be parried or blocked, but can be sidestepped without any difficulty. This attack basically pushes opposing heroes back and leaves them open for a light attack that inflicts bleeding.

However, this entire combo depletes quite a lot of stamina so bear this thing in mind. It can either be performed using the Hidden Stance or by pressing the guard button after any attack.

This is a forward poke which inflicts bleeding and has a ridiculous range. If you manage to parry an opposing hero, you can land this poke to inflict bleeding and deal a massive amount of damage with the follow-ups.

If you press the dash button immediately after blocking, you’ll block the attack and travel a few steps backward. This should basically allow you to gain some range and reposition yourself.

However, I strongly discourage you from doing it near ledges or traps because of how easily you can get caught. You need to time it well if you wish to do any good following this ability.

With Nobushi, if you guard down, you’ll enter the Hidden Stance which allows you to avoid any incoming attack with proper timing. The exceptions to this including feats and guard break.

However, the timing is little earlier than parry so you may be required to use it predictively. You can also hold the stance to confuse the opposing heroes as to what will you next.

When in this animation, you can go in with a kick and surprise the opposing heroes. However, do note that this ability takes a good chunk of stamina and halts the stamina regeneration for a while.

For Honor Nobushi Counters and Match-Ups

Nobushi can be countered by Warlord, Warden, and Kensei while she tends to do well against Peacekeeper and Orochi. One of the biggest weaknesses of Nobushi is the stamina cost of her attacks.

As mentioned earlier, in order to deal maximum damage output, you need to inflict bleeding. If you fail to do so, you won’t like her subpar damage output.

She’s easily one of the hardest heroes to play and master in the game.

Since we played the game on PC, the keys used below are from PC’s default layout.

Poke the Nest
It’s performed by pressing the LMB thrice.

Hiss and Bite
It’s performed by pressing the LRB and then the RMB.

Death Rattle Form
It’s performed by pressing the RMB and the RMB.

Slithering Thrust
It’s performed by ↑ + LMB. It can’t be performed while in Guard Mode.

Coiling Slash
It’s performed by ↑ + RMB. It can’t be performed while in Guard Mode.

Cobra Strike Mix Up
It’s performed by canceling the MMB into MMB and then pressing the LMB.

Kick
It’s performed by pressing the LMB/RMB followed by MMB.

Swift Recoil
It’s performed by blocking and then pressing Space.

This is all we’ve on our For Honor Nobushi Hero Guide. If there’s anything else you’d like to add, let us know in the comments section below!