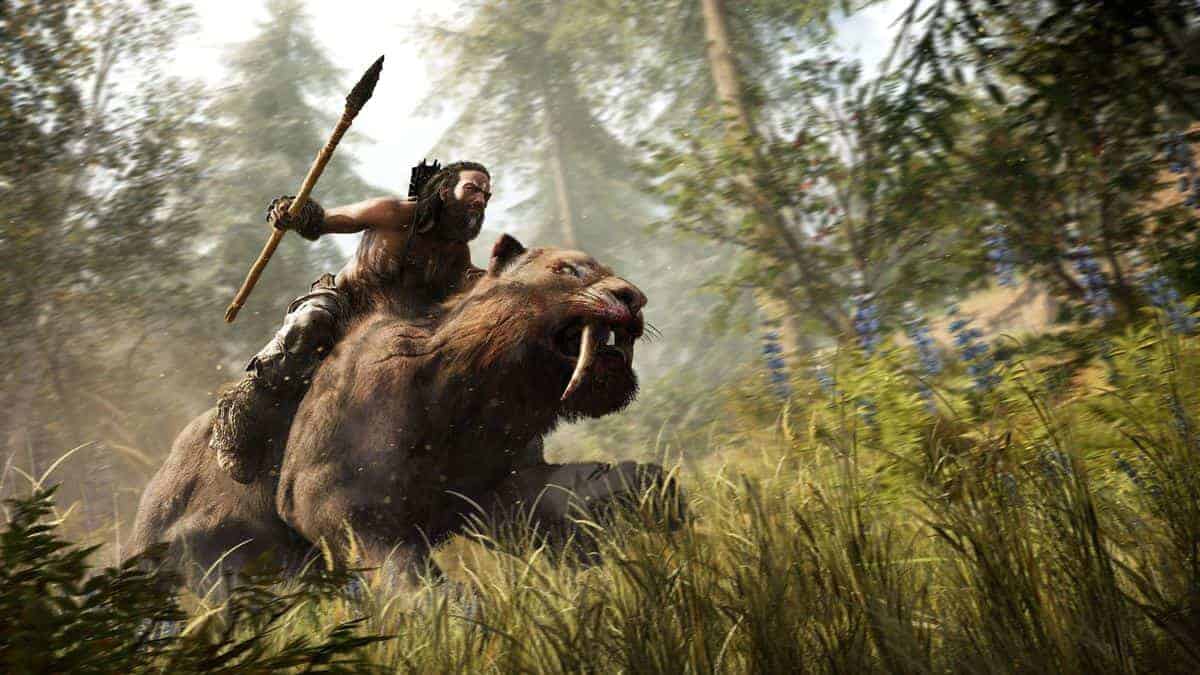 Far Cry Primal skills are earned by bringing certain tribesmen to your village and building huts for them. There are plenty of skills in the skill tree, and many of them are absolutely essential to ensure survival against all kinds of enemies.

Far Cry Primal skills are divided into six different trees. Each tree has a requirement to unlock. Most skills also have pre-requisites.

This guide lists all the skills in Far Cry Primal, recommending the ones that are most important and should be prioritized.

The skills are listed in an order that shows pre-requisites.

Primitive Takedowns
Already learned skill that allows you to perform takedowns from behind enemies or by cover. You can even drag bodies out of site after performing the takedown.

Primitive Heal I
This skill is available after reaching Oros. Hold the Heal button to manually heal one heath bar.

This skill grants you +1 health bar. It requires Primitive Heal one and you need to build Takkar’s Cave to unlock it.

Hunter Vision
This skill is already learned and allows you to isolate special objects in the environment. Lasts eight seconds and extends to your Owl companion.

Primitive Agility
This skill is already learned. You can sprint, then crouch to perform a slide.

This gives you an additional health bar. It costs 6 points.

Sprint Heal
This skill is unlocked when you reach Oros, and costs 1 point. With it, you can heal yourself while sprinting.

Crouch Sprint is available after building Takkar’s Cave, and costs 2 skill points. You can move faster when crouched with it.

Sprint Forever
This skill is available after building Takkar’s Cave, and costs 3 skill points. Your sprint speed is permanently increases and you do not slow down while sprinting.

Primitive Stealth
This skill is already learned. You can throw rocks to distract enemies and move dead bodies out of sight with it.

Primitive Fire
This skill is already learned, allowing you to light campfires and set certain weapons on fire.

It is available after building Takkar’s Cave, and costs 4 skill points. The sound of your footsteps while walking and sprinting will be greatly reduced.

Reveal Terrain I
This skill is available after you meet Sayla. It costs 1 skill point, and reveals 200 feet of terrain around you in the map to uncover activity and missions.

Show Resources
This skill is available after you build Sayla’s Hut. It costs 1 skill point. It shows wood, stone, and other village resources on the mini-map.

Find Rare Resources
This skill is available after building Sayla’s Hut. It costs 2 points, and allows you to find rare wood, stones, and reeds.

Reveal Terrain II
This upgrade to Reveal Terrain increases the range to a 400 feet radius. It costs 3 skill points and is unlocked after building Sayla’s Hut.

Show Plants
Plants are displayed on your mini-map after unlocking this skill with 1 skill point. You need to meet Sayla to make it obtainable.

Search Takedown
This skill is Recommended.

After building Sayla’s hut, this skill is available for 2 points. It automatically performs a search on an enemy for you after you perform a stealth takedown.

Find Resources I
This skill increases the amount of resources you find when gathering. It costs 1 skill point.

Skinning I
Gain additional meat (+2) when skinning animals after acquiring this skill (2 points).

Skinning II
This skill allows you to find +2 Animal Fat and +2 Animal Hide when skinning most animals.

It allows you to revive your tamed beast with fewer Red Leaves. It costs 2 skill points.

Tame Canines
This skill is obtainable after finding Tensay and completing the Beast Master mission. You will be able to tame Dholes, Rare Dholes, Wolves, White Wolves, and Rare Stripe Wolves.

Build Tensay’s Hut to unlock this skill. You can spend 1 skill point in it to be able to tame Leopards, Jaguars, Rare Black Jaguars, Cave Lions, and Rare Black Lions. Wildcats are excellent stealth beasts.

Tame beasts like Sabretooth Tigers and Brown Bears. You will need 2 skill points, and will have to tame 5 beasts to unlock the skill.

You can now tame badgers and Cave Bears with this skill. You’ll need to tame 8 beasts to unlock this skill. It costs 3 skill points.

Owl Companion
This skill is available by default once you bring Tensay to your village.

Owl: Attack I
This skill is Recommended.

Your owl can perform a diving attack. It kills most regular enemies and can unlock cages. It costs 1 skill point.

Owl: Cooldown I
This skill is Recommended.

The owl attack cooldown is reduced by 15 seconds.

This skill increases the range of the owl’s tagging ability.

Owl: Cooldown II
Further reduces the cooldown on your owl attack by 25 seconds.

For these skills you need to bring Jayma to your village and build a hut.

Hunter Vision: Sacks
This skill costs 1 point and allows you to see resource sacks in Hunter vision. It also extends to your Owl.

Craft Arrows I
You can craft two arrows instead of one from the weapon wheel while using the same amount of resources.

Craft Arrows II
You can craft four arrows instead of two without any change in resource cost.

Craft Arrows III
You can craft eight arrows instead of four without any additional resource cost. It requires 4 skill points.

Tag Enemies
This skill is Essential.

You can tag enemies permanently while aiming at them. This skill extends to your Owl.

Tag Animals
This skill is Recommended.

You can now tag animals while aiming at them. This skill also extends to your Owl. Requires 4 points.

Animal Wounds
Increase the amount of damage your weapon inflicts on animals. It requires 6 skill points.

Hunter Vision: Plants
You can now see collectible plants in Hunter Vision. The skill extends to your Owl.

You can reload your bow while sprinting. The skill costs 2 points.

Greatly reduce the sway while aiming with the bow. The skill costs 3 points.

For this tree you will need to bring Karoosh to your village and also build a hut for him.

Death from Above
Jump/fall onto an enemy below for a quick kill. It costs 1 skill point.

Weapon Agility
Switch between weapons with the heal button is faster, even while sprinting.

Use Weapons While Moving Bodies
The name of the skill says it all.

Shard Takedown
After performing a takedown on an enemy, throw a shard to kill another enemy using the Quick Attack button. You must have shards to use this kill. Costs 2 skill points.

Heavy Takedown
This skill is Essential.

You can now perform takedowns on Chieftains. It costs 3 skill points.

Mammoth Rider
This skill is Recommended

Approach a young Mammoth and interact with it to ride it. You can then charge with the mammoth to kill enemies, and also attack them with the tusks. The skill costs 2 points.

Chain Takedown
This skill is Recommended.

Beast Rider
This skill is Recommended.

You can now ride Sabretooth Tigers, Brown Bears, and Bloodfang Sabretooth after taming them.

These skills are available once you bring Wogah to your village and also build the corresponding hut.

Food Boosts I
The effect of Food recipes is increased from 60s to 90s.

Double Clubs
Craft two clubs instead of one from the weapon wheel without changing resource cost. Costs 2 skill points.

Precision Sling
This skill is Recommended.

Double Spears
Craft two spears at the cost of one. Costs 3 skill points.

Double Traps
Craft two traps at the cost of one. Needs 2 skill points.

Double Shards
Craft two shards at the cost of one. Costs 3 skill points.

Double Bait
Craft two baits for animals at the cost of one.

These additional skills are unlocked after you bring Dah to your village and build a hut.

Primitive Heal III
Heals an additional bar when manually healing, can heal up to 3 bars in total. Costs 4 skill points

This tree requires you to bring Roshani to the village and build a hut.

Reduce the damage you take from fire. It costs 2 points.

Fire Takedown
This skill is Recommended.

You can toss firebombs at enemies after performing an initial takedown. You need firebombs in your inventory to use this. Costs 3 points.

Fire Master I
This skill is Recommended if you wish to explore Lost Caves. You no longer need animal fat to set your weapons on fire. Costs 6 points.

Fire Master II
Setting one weapon on fire will set all subsequent weapons you equip on fire. Costs 4 skill points.