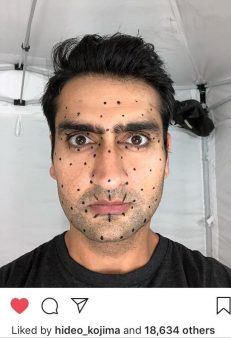 Death Stranding is one of the most anticipated games ever in the gaming industry and it’s been in development for some time but still, little do we know about it but thanks to Kojima, who appears to keep us all confused by something every time. His latest hints make us all believe that the famous comedian “Kumail Nanjiani’ is going to play some role in the game.

Kumail Nanjiani is a very famous Pakistani-American stand-up comedian who’s also known for his acting, voice and writing skills but above all, he’s also a Hideo Kojima fan. He recently updated his Instagram feed by uploading a picture of him attempting to do motion capture as seen below.

It might seem common at first but what’s interesting about this is that picture was shortly liked by the director of Death Stranding, Hideo Kojima. Now, this speculates that Kumail Nanjiani is going to play a role in Death Stranding. He could be playing a cameo of one of the characters from the game.

It might surprise you but Kumail Nanjiani is a big gaming fan and he has done various roles in the games before. He was one of the voice actors for Shadow of War. He also met Hideo Kojima in February and he revealed on Twitter how much big of a fan he is of his work.

Hideo Kojima is a master of keeping secrets and revealing them later where and when he wants. Death Stranding already includes an amazing cast of famous actors like Mads Mikkelson, Norman Reedus, Lindsay Wagner and a lot more. Adding Kumail Nanjiani to the game will definitely give it a boost and it’s definitely going to be the biggest game of the decade.

Other than that, Kojima also retweeted CHVRCHES recently hinting us that they are working on a themed soundtrack for the game.

Do you want Kumail Nanjiani to be in Death Stranding? Let us know in the comments below.