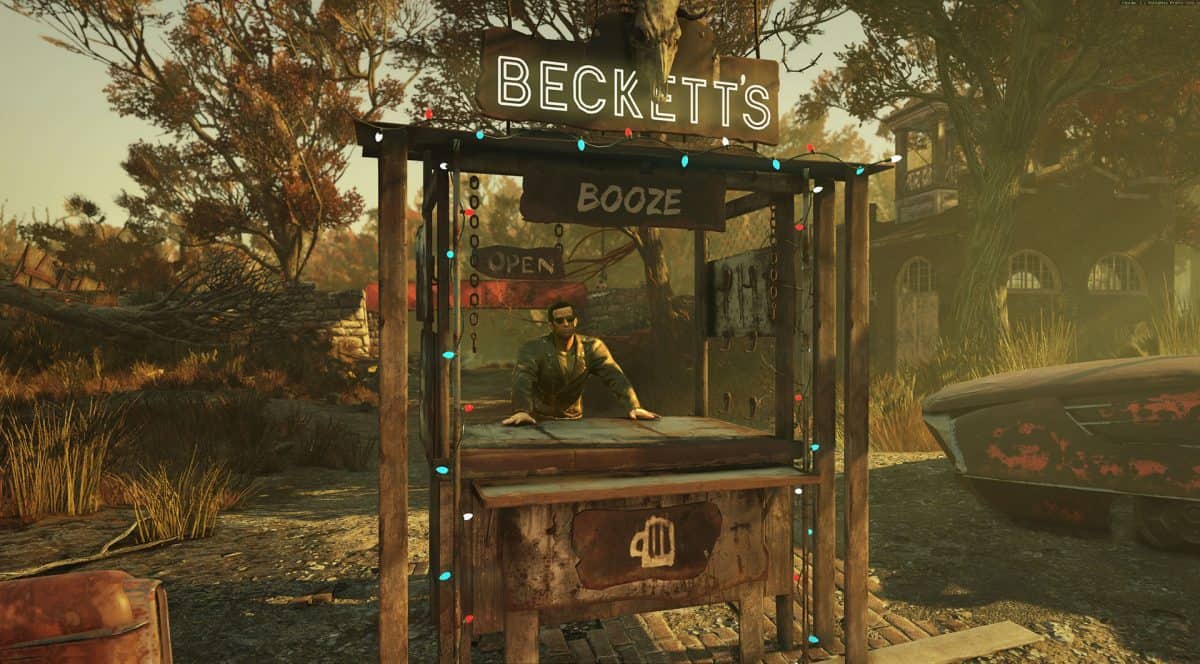 In this guide we will discuss the walkthrough of Fallout 76 Wastelanders Thicker than Water mission in detail. The guide will be in-depth and will be divided into parts based on the area you will be performing the tasks in. Let’s get started:

Starting out, you will be talking to Beckett, now we will not waste time by telling you the whole dialogue so just skip and use the following chat options to go forward.

After that, you will have to fast travel to Watoga Shopping Plaza.

Watoga Shopping Plaza
Starting out you will have to equip a power armor with a fusion core and follow the marker. It will take you to the left and you will have to climb up a couple of steps and open the gate. Inside you will come across Beckett and Ronny.

After talking to Beckett, speak with Ronny and select the first dialogue option; “You are mysterious “Ronny.” I almost though Beckett was making you up.”

You will get the key to the Watoga Underground joint. After that, you will select the first option again. Beckett will explain the plan to you. Ask him about the control room and he will let you know about how you will use it.

Watoga Garage Entrance
Interact with the door to open it. When you go down the escalators, which are just stairs now.

When you reach the corridor there would be a sliding door to the right, go through it and turn left. Go to all the rooms that you can go to and get as much loot as you can.

There will Blood Eagles around, take them out. Then at the end, there would a door at the left. Turn right after going through it and then go down the stairs.

On the right side of these stairs would be a door that would take you to a big hall. Go down and face some droids and then you will have to turn left.

You will come across some tracks here which is actually the Garage and your first objective is to open its door. You will find a console, after some stairs.

Unlock the Garage door using that console. Then follow the tracks on the left and you will get to a very big hall.  Climb down and take out all the enemies here.

On the right there would be a control room on the ground level, go through it and take the stairs and take out the enemies there as well.

There is only one path open on the left and on the left side of this corridor is a narrow-elevated walkway that has a door at the end and on the other side is another terminal. You will activate the turret using this.

Get out from that room and go straight ahead again and take out all the enemies there.

Going straight will take you to another terminal on the right and the next door to it has stairs that will take you down to a circular hall with a large pillar in the middle. There is only one way in and another way out.

Go out and kill all the enemies, turn left and make your way through the corridors to get to junk yard like place. There would be enemies there as well, kill them.

Go straight forward and open the sliding door on the right. There is an activated turret with several enemies there. This looks like the center of the mall with the hub of escalators.

There would be door near the escalators and on the other side is The Claw.

Turns out Frankie, Beckett’s brother is the claw. He is being possessed or mind-controlled by something and you and Beckett will try to snap him out of it. When its done, fast travel to the CAMP.

The Camp
Beckett would be present at the stall. Go there and talk to him and make your brotherly affection known to him and the mission would be completed.