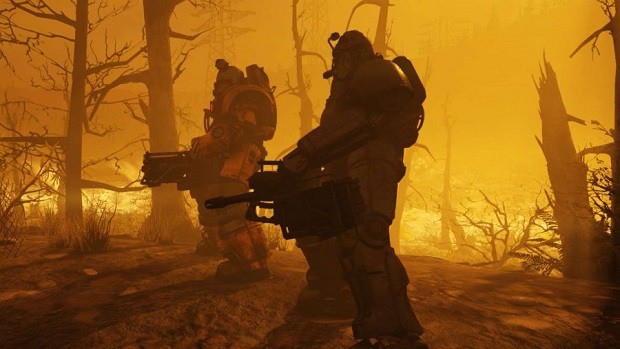 Fallout 76 is full of radiation effects but Bethesda has added the Hazmat Suits in the game for those who hate it or have a hard time with it. These Hazmat Suits do not provide any protection from damage or energy resistance so keep that in mind.

There are three different types of Hazmat Suits in FO76 so pick wisely. However, all of them will protect you from radiation, diseases, and from waterborne risks. You cannot wear any other clothing when you have the Hazmat Suit on.

The Hazmat Suit is heavy and weighs about 5 when new. The damaged version of the suit weighs 4. It is a very useful suit if you want to do some exploration in West Virginia without having any effects of radiation on your character.

This Fallout 76 Guide will help you identify each Hazmat Suit and will help you decide the one you would need the most. Check out the table below to see how much resistance each suit will bring to your character.

Where to Find Hazmat Suits
You can find one a new Hazmat Suit in Poseidon Energy Plant WV-06. This one is not that hard to find. It is hidden at the top of a very massive energy plant that you can spot very easily on your in-game map.

Once there spot the single chimney and look right across it, you will see some stairways which you will have to take to reach all the way to the top. Once you reach the concrete roof, go to the right and then head to the south.

Towards the end of it, you will see a temporary office that looks like kind of a trailer. Inside it, you will find the Hazmat Suit lying in the corner on top of some boxes.

Prototype Hazmat is also present right across the generator on the right side in the tunnel.

2 normal and one damaged suit are also present in the Federal disposal field HZ-21. Other than that, there are 2 damaged Hazmat Suits inside the changing rooms at West Tek Research Center.

Two can also be found at Dyer Chemical. Check the room where you find the nitrogen as well as the room with the chemical vat.

One damaged suit can be collected from the crash site of the space station to the North. Check inside of the divided part at the south end.

A Prototype Hazmat suit can also be obtained during Tracking Unknowns.