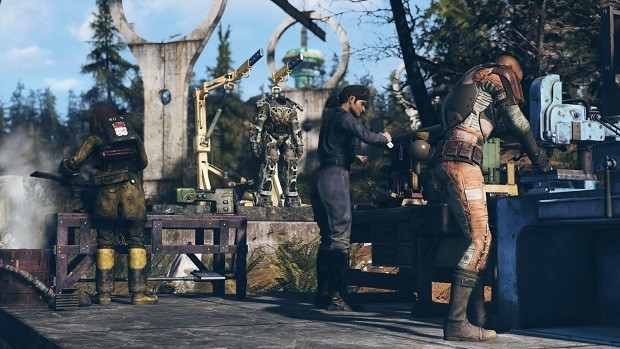 Having trouble trying to understand Workbenches or stations? Having trouble learning how to cook, or what to cook? Having trouble making weapons, armors, and other cool stuff that someone is selling to you for extremely high price? This Fallout 76 Crafting Guide will definitely help you become your own man. Follow it and you might become a useful person of the society!

This crafting guide has been crafted for your better experience. Fallout 76 is a massive game and has a great deal of items that can be crafted. To craft items in Fallout 76, you need different platforms.

They include stations, Workbenches or even C.A.M.Ps. These are located on various areas on the map, but C.A.M.P can be implemented on the map in any of the locations you like.

Of course, you can skip crafting items and directly buy items from robots and other players for Caps, but you’ll see yourself running out of Caps pretty fast. The most efficient way in Fallout 76 is to craft items. Without further ado, let us begin:

The cooking station can be used to cook up different kinds of food or drinks. They can even be used to make herbal potions. Cooking Stations are located all around the grand world of Appalachia.

After taking out water from the Water Pump, you can boil it here to make it healthy enough for use. If you’re in the wild, though, you can craft a Cooking Station in a C.A.M.P.

Do note that eating most of the food cooking from a cooking station may still give you a little bit of radiation. Use a RadAway if you’re reaching your limit.

Some of the items you can craft in this Workbench includes: All drinks, all food, Salves, meat, plants, prepared food and drinks, and some utility for crafting.

The Armor Workbench, as its name symbolizes, can be used to make armor. Various protective armor pieces can be crafted, including limbs, torso, and head.

The more you level up as a player, the better the armor will unlock in workbenches, and the better will be the quality of the same item.

The Armor Workbench can also be used to repair or modify armors. Additionally, costumes can also be stitched here. In Fallout 76, you can make a living as a smith, or a tailor. The possibilities, and bugs, are infinite!

Some of the items you can find in the Armor Workbench include: Clothing, Heavy Armor, Headwear, Light Armor, Sturdy Armor, and protection beneath Armor.

Basically a link between the Cooking Station and the Tinker’s Station, the Chemistry Station provides construction for chems that can be used in food and potions, fuel and gunpoweder for weapons’ ammo, and smelted ore for metal scrapping and constructing armor.

Perks
Some of the perks exclusive to a Chemistry Station are:

Some of the items that can be found in a Chemistry Station include: All drinks,simple ammo, energy ammo, drugs, grenades, salves and RadAway/Stimpaks, mutation serums, nuked flora, smelted ores, and other utility items.

Weapons can be crafted at the Weapons Workbench. There are a ton of weapons available here, and quite possibly, every weapon can be crafted. Of course, nothing’ll be free. You’ll need a lot of parts to construct a weapon.

Additionally, there are a tons of mods you can apply to each weapon, leading to an infinite amount of guns, blades, launchers, bats, rifles and other weapons that can damage things.

Perks
There are some perks exclusive to a Weapons Workbench:

Some of the types of weapons that can be crafted in a Weapons Workbench include:

Tired of ratting around in trash cans and sewers for ammunition? Now you can construct your own ammunition, exclusively on the Tinker’s Workbench. This workbench also offers you to build grenades, miens and much more.

In addition to crafting simple ammo, you’ll also be prompted to make special kinds of ammo. Though there might be a level requirement. Some of the items that can be crafted on the Tinker’s Workbench are given below:

Perks
Some perks are exclusive to the Tinker’s workbench.

Some types of ammo that can be crafted in this workbench include: Simple Ammo, Explosive Ammo, Energy Ammo, Buff, Grenades, and Mines.

Water Pump
The Water Pump is a tool that can be used to dig relatively clean water out of ground. You can find pumps in most towns. But if you don’t want that, you can also craft a Water Pump in a C.A.M.P. if you have a plan.

The Workshop workbench is basically a placeholder for a Public Workshop that can be used to building huge defense parts or to mine rare resources nearby each workshop. The Workshop Workbench has to be claimed before use.

You can either pay for your claim, in caps, or fight others over it. Its either brains or brawn. Your choice.

The Stations are used to assemble things up. Some of the stations include:

The Power Armor Station can be used to mod different parts on a Power Armor. Occasionally, you may also find some complete Power Armor sets hanging on these stations. You can also scrap the many items here for Power Armor scrap part ingredients.

There might be a level requirement to equip some parts of a Power Armor, so don’t expect much at lower levels. You can find out more on the Power Armor locations in our guide. Additionally, you can also build a Power Armor Station using C.A.M.P. if you have a plan. There are 2 variants.

As you level up and find different type of plans and raw materials, you’ll unlock different items for your power armor. Generally, they are:

There are different types of items in Fallout 76, that can be used in workbenches or stations. The game automatically categorizes them into three main types. Lets discuss them below:

Recipes
This includes all sort of consumables, chems, and ammo that will inevitably be used up by the player upon an action. You can find Recipes spread out across the world in the locations your common sense is telling you to look into.

You have a better chance of finding ammo in shooting camps, or in cafes (don’t ask). Similarly, chems are pretty common in hospitals and other sites of medical expertise. You can also obtain recipes by scrapping a specific item. Recipes may also come as a bonus for picking up an item.

You’ll need to read a specific Recipe before it can be unlocked in your workbench.

You might have run into a few of these yourself too. As discussed above, the specific power level of a crafted item can change depending on your level, and your expertise.

This is why it’s better to invest into crafting early on in the game. The more you craft, the better you get at it.

You can find Mods in special wooden boxes with a cog insignia printed on top of it. They’re scattered all around the world. You can find out more information on Mods through the Inventory Guide.

Junk Items
These are items that you can use to crafting everything. They are available in abundance all over Appalachia. They are also regenerated after each successful day.

Pick up literally everything you see in the world. You can break it down into basic components for use later. For example, you can break down the Blast Radius Board Game into Nuclear Material, that can be used in many other materials.

Do not worry about the inventory space too. You’ll not run out very soon.

There are a lot of different types of junk items. Heck, even a soap is a junk item. You can scrap it into oil, and that’ll become useful in your crafting world. As your mind grows, you’ll become more accustomed to picking up specific junk. One thing to note is that you may not need to scrap all your junk.

You can make items from workbenches and the workbench will automatically scrap the required junk. Scrap junk only if you need space.

Non-Junk Items
There are a ton of non-junk items that can be scrapped up, but shouldn’t be. These include weapons and other stuff that can be used temporarily but might become useless later. You should keep all your old weapons and turn them into scrap later when you do not have a use for them.

Magazines
Magazines are special items in Fallout 76 that grant you unique buffs temporarily. The buff from a magazine can last several hours when activated. These are basically in-game boosters, but free.

You can also use Luck perk Curator to increase the time a specific Magazine can provide a buff by 2/3/4 times, depending on the perk’s level. You can find out more on Magazines through this guide. Some of the magazines are discussed below, in this guide: