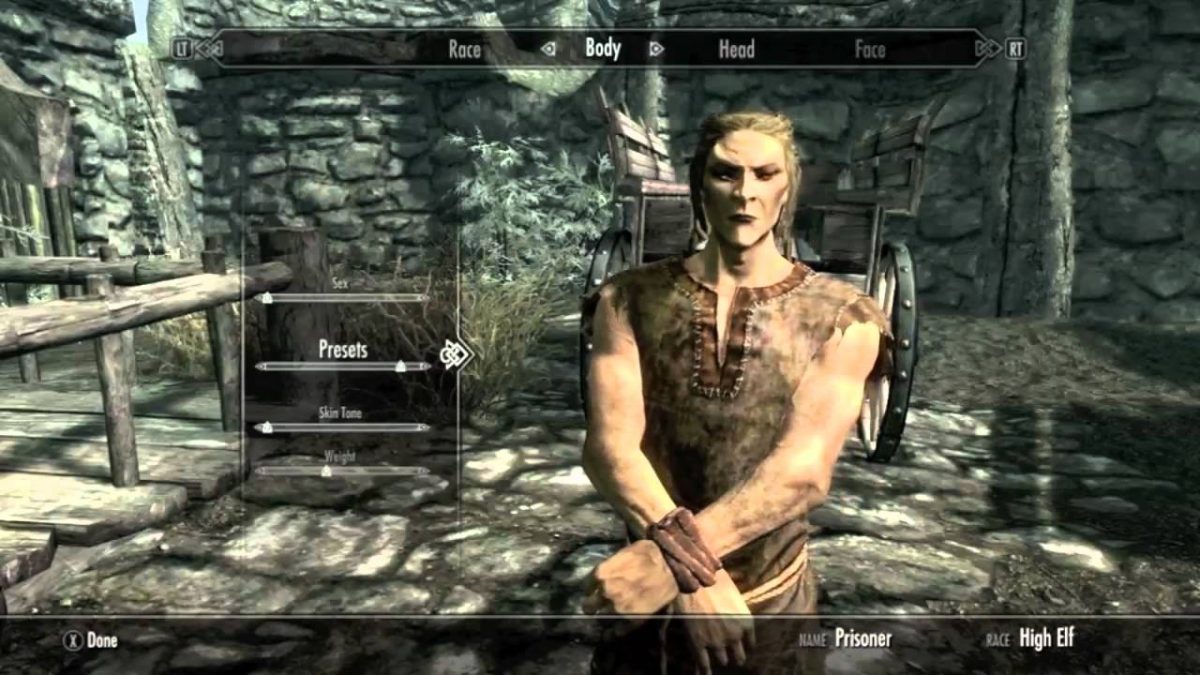 You will start by choosing the race of your character. There are 10 distinct races available in Skyrim and each has its own set of skills and trait bonuses. Since there are no classes in Skyrim, choosing a race is very important because you don’t want to end up with a race that doesn’t compliment your game style. Continue reading for our in-depth guide on character creation in Elder Scrolls V Skyrim.

Different races give different stat bonuses to your starting character. Your character stats are either positively or negatively affected. They also give you racial abilities and powers, which are unique to each race.

When you create a character, it will have 100 Health, Magicka, and Stamina. It will have a base value of 15 in every skill. Each race type may award bonus skill points to certain skills.

When it comes to magic, all the characters will at least have a flame and healing spells.

Pick Your Race
Each race in the game has its own special ability, strength, resistance, and stats as compared to others. Also, the racial skills can either be Command Animals which is a great natural power or the ability to resist, such as Water-breathing. Therefore, be careful and learn about the skill bonus and special abilities of the race you are going to choose. It will help you pick a race that compliments your game style. Following are the races you can choose from:

Argonian
Argonian’s are a type of Underwater Furtive Assassins, the main characteristics of this race is there 50% Resistance to disease and regeneration of health 10 times faster for 60 seconds, and their horns and feathers can be changed. This race has the ability to respire underwater and they begin the game with lock-picking, sneak, light-armor and rewards for skills. This race receives a bonus of +10 Lockpicking, +5 Restoration, +5 Alteration, +5 Light Armor, +5 Sneak, +5 Pickpocket.

Breton
Breton’s are decent in terms of looks, having features such as a 25% boost resistance to Magicka as well as a b 50% of Magicka from adversary spells for 60 seconds. power, impressive initial skills and they receive a bonus of +10 Conjuration, +5 Alchemy, +5 Illusion, +5 Restoration, +5 Alteration, +5 Speech.. This race provides you with assistance against besties.

Dunmer – Dark Elf
Dark Elf’s are intimidating Dragonborn, they can assist you in dabbling in magic and sneaking in sword fights. This race has the ability to encircle themselves in a flame storm (Hailstorm flame) and they are 50% resistant to fire. Darks Eld’s get a bonus of +10 Destruction, +5 Alchemy, +5 Illusion, +5 Alteration, +5 Light Armor, +5 Sneak.

Altmer – High Elf
If magic has importance in your gameplay then High Elf’s are the race to choose. This proud and lofty looking race is considered as the highly gifted race in Skyrim, they can regenerate Magicka for 60 seconds, by calling on their Highborn. High Elf’s get a bonus of +10 Illusion, +5 Conjuration, +5 Destruction, +5 Alteration, +5 Enchanting +5 Restoration.

Imperial
Imperial’s are sharp-witted representatives and traders who help you calm other characters for 60 seconds along with encouraging you to prevail on (while making sure of an equitable amount of a trading post). Imperials receive +10 Restoration, +5 Destruction, +5 Enchanting, +5 Heavy Armor, +5 Block and +5 One-Handed.

Nord
Nord’s are Barbarians natives of Skyrim; this race has one-handed warriors who are resistant to Frost by 50% and can cause the adversaries to run off for 30 seconds due to their battle cry ability. Nord’s receive a bonus of +10 Two-Handed, +5 Smithing, +5 Block, +5 One-Handed, +5 Light Armor and +5 Speech.

Orc – Orsimer
Orcs are good looking characters in Skyrim, having the best cloud from top to bottom (in armor). This race is not appropriate to sneaking/spells. However, due to their brutality and strength, they are a danger to adversaries, and they can deal double damage and receive half the damage for 60 seconds. Orsimer’s are given +10 Heavy Armor, +5 Smithing, +5 Enchanting, +5 Two-Handed, +5 One-Handed, +5 Block as a bonus.

Redguard
Redguard’s are naturally resistant to poison and are very talented characters in Skyrim having abilities such as performing an adrenaline rush in battles that provides them with limited “60 seconds” endurance, strength, health, speed, agility. They receive +10 One Handed, +5 Destruction, +5 Alteration, +5 Smithing, +5 Block and +5 Archery.

Bosmer – Wood Elf
Wood Elf’s are nature-loving characters having the ability to call animal assistance from Mother Nature, when surrounded by several adversaries. They are brutal when they are unseen with the possession of a bow. Bosmer’s receive 10 Archery, +5 Alchemy, +5 Light Armor, +5 Sneak, +5 Lockpicking, +5 Pickpocket as bonus. They also have 50% resistance to Poison and Disease.

For more help on Races, read our Skyrim Race Guide.

Pick Your Gender
Male or Female – nothing complicated here really but do know that NPCs may react differently depending on your gender and race. That is because certain regions in Skyrim are prejudiced towards certain gender.

After selecting the race and gender of your character, you’ll need to move forward to the next step which is choosing the right appearance. If you’ re really in-depth about how you look than you can alter everything starting from face to the lower body. You can even select the costume hairstyles and hair colors. After you’re done with the looks, simply click confirm and change the name from “Prisoner” to whatever name you desire.

As soon as you reach the Thieves’ Guild in Riften, you can alter the appearance of your character again for a small fee, if you’re not satisfied with its look. But if you want to alter the eyeshade and war paint of your character than you’ll have to install the Dawnguard DLC, it may cost you much but it’s worth it. So, you may want to save at least 1000 gold to get your body altered by Galathil in The Ragged Flagon.

If you face any technical hurdles in your attempt to indulge yourself in the beautiful World of Skyrim, read our Crashes Freezes Fixes.