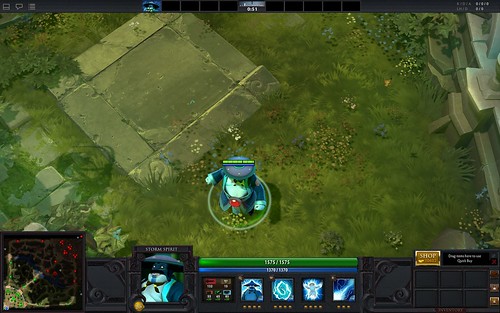 Storm Spirit is a very misunderstood hero. Often, he is thought of as a carry who should be in mid lane. In truth, Storm Spirit is an awful mid hero who has no way to win mid over a competent player, and/or a proper mid hero.

In order to win mid, there are a few things a hero needs to be able to do. You can mix and match, but in general, you want to be able to harass safely, last hit/deny, flash push the lane, and control the rune.

Some heroes get by with just a few, or specializing really well in one, but Storm Spirit does all of these things very poorly in comparison to most mid heroes.

He has a 480 attack range, when most heroes he’ll be up against, will have 550+ attack range. His only nuke is self positionable with a one second delay before activation.

The only way to harass an enemy with that spell, is by being level 5, and within 300 casting range, to use his pull. Which, of course, is on a 20 second cooldown.

Even if you want to push the lane, you have to walk straight up to the creep wave and even then, his pushing power is very weak in comparison to most mid heroes. The only way you can contest a rune, is by being level 6, and dumping your entire mana pool just to get the rune.

Which is not only inefficient, but will generally put you in an even worse position than you already were in. What makes matters even worse, is that Storm Spirit is the most bottle dependent hero in the game.

This is why Storm Spirit is actually better off in the jungle, than he is taking up your team’s mid/solo slot. While this might come to a surprise to you, the way you jungle with Storm Spirit ends with you being level 6 before the 7 minute mark, while making a total of 1600-ish gold in the process.

At this point, you get to freely gank whichever lane you want, without having to worry about your responsibilities mid, or having your intentions called out by the opposition.

Storm Spirit’s real role, is that of a ganker. He can initiate, and set up ganks better than any other hero in the game.

Unfortunately, this often takes up his entire mana pool to do, so it’s essential that your team mates add disables and stuns, to bring the target down.

The reason he’s often misconstrued as a carry, is because he often picks up intelligence carry based items, like Orchid Malevolence, to help counter heroes he has a hard time ganking.

Browse through the guide – Abilities, Builds and Strategy.

Static Remnant creates a “mine” at your position, upon cast, that takes one second to arm. After it’s armed, anything that comes within 225 distance of the Remnant, detonates it. The Remnant then explodes in a 260 AoE.

If nothing detonates the Remnant, it will last for 12 seconds before detonating on its own. During this duration, the Remnant will have flying vision, which allows you to see over trees and terrain you wouldn’t normally have vision of.

This makes it amazing for juking, as it gives you vision of what your pursuer’s path, while also giving them ample reason not to chase you. It’s worth noting that this skill is extremely powerful with just one rank in it, while it’s mana to damage ration goes up marginally with levels.

At rank 3 of this skill, you will pull your target into a Static Remnant. As a result, you will often put 3 points into this skill, as quickly as possibly, and then stop putting points into it until everything else is maxed. While the target is pulled, it can’t attack, or cast any spells, and your move speed is slowed by 50% for 3 seconds.

Every time you cast a spell, you gain a charge of Overload, which amplifies your next auto attack. If you didn’t have the Overload buff before you launched an auto attack, you can still Overload that attack, by casting a spell, provided the auto attack is still mid-air.

This ability is the foundation of Storm Spirit’s kit, it’s imperative that you auto attack in between casts, as the damage really adds up.

While Overload is the foundation of Storm Spirit’s kit, Ball Lightning is his flashy, iconic skill that defines his play. Mastery of this skill, separates the good Storm Spirits, from the bad. The hardest part about using this spell, is resiting the urge to over use it.

The large bursts of mobility this spell offers, is really addicting, but over using it, or using it to go too far, will deplete your  mana almost instantly. Always keep in mind that mana efficiency is of the utmost importance while playing Storm Spirit.

Static Remnant needs to be rank 2 in order to pull off jungling properly.

Starting: Bottle (If there’s no courier, get one and save the rest of your gold for a bottle)

Early: Power Treads or Arcane Boots (if going for an early bloodstone)

Depending on your team’s composition, and the enemy team’s composition, you may need to take up the roll of initiator, or ganker. If you’re initiating, you’ll need to bulk up and get the most powerful mana regen item in the game Bloodstone. Grab an Arcane Boot early, and disassemble it to complete your Bloodstone.

Electric Vortex is rushed to rank 3, so that it drags people into your Static Remnants. This works, because Static Remnant does a lot of damage, for just one rank in it. With this build, you’re mostly setting up kills by constantly ganking side lanes.

This is a build I’ve found myself using a lot, since Overload got buffed. Since most heroes can dominate Storm Spirit in mid lane, this build is the only way to either harass back, or to dominate the last hits. Abuse Remnant’s low mana cost, to proc Overload.

The concept of this build, is to load up on cheap early game stats, to give you some sort of edge against your opponent(s).

Maxed out Overload and a couple of Null Talismans make your auto attacks hit very, very hard. This build does more damage than the Static Remnant focused builds, but lacks the utility early on, for setting up ganks. If the other team is light on escapes, this build can really shine.

Storm Spirit Strategy – How to Jungle Start at the easy camp and rotate your auto attacks so that you hit each minion the same amount of times, while you use Static Remnant every time it’s off cooldown.

You’ll have just enough time to make your way to the nearest hard camp, to pull it by the :53 second mark. To pull, you simply auto attack the creep camp, and run away so that they chase  you. When they de-aggro, and go back to their camp, a new camp will have spawned. Head back over to the easy camp you just killed, and kill it again.

Send the courier home, and have it bring back the bottle once it’s been filled up at the fountain. While you’re waiting for all of this to happen, position yourself at the hard camp that you had previously stacked.

Rinse and repeat this method of killing the easy camp, and stacking the hard camp, for the first 6 minutes of the game. Once you’ve stacked the camp 5-6 times, you’ll use a Smoke of Deceit and a full bottle to kill the stacked camp.

While smoked, you’re invisible to creeps, and you cast abilities, or use items, without breaking it. If nothing goes awry, you’ll hit level six the moment you finish off that stacked hard camp. Priming you in a position to gank for the rest of the game.

I highly recommend that you play around with the timing required to creep pull large stacks of mobs in a bot match, until you get the hang of it. Around the third and fourth stack, you’ll want to just start pulling at the :51 second mark.

Storm Spirit Strategy – How to Mid

If your opponent isn’t too threatening, you can get away with snagging in last hits, while you wait to hit level six. Once you’ve got your ultimate, it’s time for you to start looking for ganks.

In this scenario, you should be using the ganking build, so communication is key to success. You’ll generally not be able to pump out enough damage to kill anyone by yourself, unless they’re extremely low on health.

Your generic action sequence will go something like this, Ball Lightning, if you have to, to get in range to cast Electric Vortex. While using Ball Lightning repeatedly right click on the hero, so that Storm Spirit attacks the hero, using up  an Overload charge, while in Ball Lightning.

Immediately afterwards, cast Electric Vortex, and right click on the hero. Once your attack lands, and you’ve used up another Overload charge, cast Static Remnant and attack again.

Depending on the hero, you may want to cast Ball Lightning, the moment they get out of your pull, as to avoid any retaliation. Make yourself a hard target, and try to dodge skill shots while weaving in auto attacks to use Overload charges.

Against a harder opponent, you’ll have to max Overload to compete. Even then, it may not be enough. Depending on what you can get away with, pepper your opponent with Overloads, or try to dominate the last hits with it.

Combat changes rather drastically with this build. Your goal won’t be to get into 300 range to drag someone into your Remnant. Instead, you’ll walk into combat with a pre-prepped Overload, mostly likely from Static Remnant (it only costing 70 mana) that way, once your first auto attack lands, you can immediately cast Remnant again, to get 2 quick Overloads.

From there, you’ll use your ult to bunny hop to stay in auto attack range, while proccing Overload. With this build, it’s very easy to get last hits on heroes.

Unfortunately, while it does deal more damage than any other build, it’s also very ineffective against heroes with escapes, or very strong counter-ganking tools. Making your options of targets to gank, very limited against a balanced composition.

When you get a bottle, your laning dynamics change a bit. Try pushing the lane with Static Remnant and Overload so that your creeps are at his tower, shortly before the rune spawns. This way, if your opponent wants to get the rune, he’ll have to sacrifice experience and gold just to contest you for it.

Storm Spirit is my favorite hero. His fast paced ganking style fits me perfectly, and is extremely addictive. Unfortunately, he has a lot of short comings. His virtually non existent laning presence and absolute need to hit level six as soon as possible, has left him in an awkward position.

He was a mid only hero, simply because if you placed him anywhere else, he’d just feed. By jungling, you subjugate Storm Spirit’s issues. Because jungling with Storm Spirit is such a new strategy, almost no one ever tries to counter it.

Even when they do, it rarely impacts your game in a meaningful way. In the event that it does, it’s generally a sign of a much more coordinated team with superior skill, and you would have been beaten even more thoroughly, if you were mid.