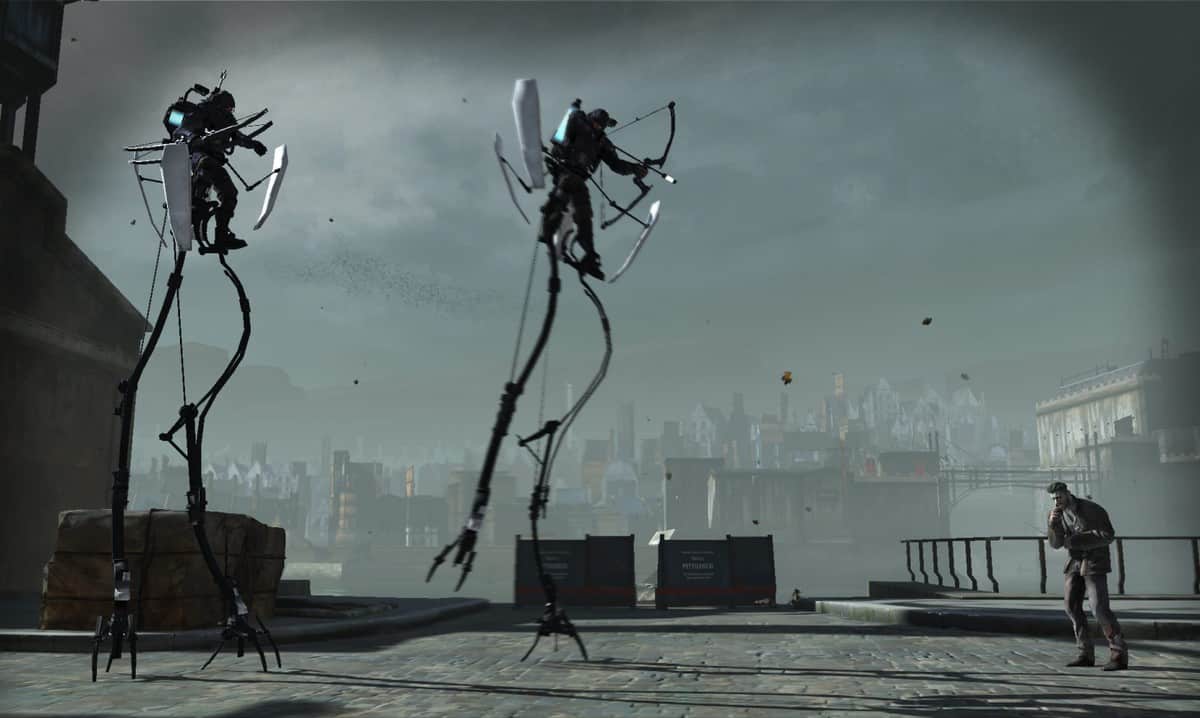 You can think of this mission as a tutorial for the rest of the game. Dishonored Mission 1 ‘Dishonored’ low chaos guide will help you get the best ending.

This mission will start by the game teaching you about jumping, stealth, camera system and character movement. When you are done with that make your way across the bridge.

There you will be greeted by the Empress’s daughter, Emily. She will ask to play a little game of hide and seek with you, if you agree to it, the game will use this activity to teach you a bit about stealth.

On your way to meet the empress you can chat with Anton Sokolov and Overseer Campbell but that is completely inconsequential. Upon meeting the Empress deliver her the letter.

After delivering the letter you go through a short combat tutorial. These enemies cannot be killed so do not worry about wounding them mortally if you are going for a no-kill play through.

The real mission begins when you have to escape Coldridge prison. This can be done in two ways either you can make a run for the exit or scavenge every last penny from the prison before leaving with no one even knowing about your escape until it’s too late. The latter way to get this done is also the harder one.

To get out of your cell take the key from the food tray. It is under the bread, along with a note for you to read. Across tge hall, grab the sword and pennies lying on the table and quickly go into the stealth mode.

There will be three guards patrolling a small yard. One is near the door from where you are and two others are having a conversation across the yard. The first of them can easily be sleeper held and his body hidden away.

However, if you do not want to give them any chance of detecting you, leave the two guards alone after you have dealt with first one and just continue your path by slipping past them around corners or when their backs are turned towards you.

Stick to the shadows and go along the left side behind the guards back. As he turns, duck into the next room.  You can get a pistol and health elixir on the wall on the left and enter the nearby room to get two more health elixirs, one from the shelf in front and one from the weapons rack.

Follow the path ahead and it will lead you to a guard who has the key for the interrogation room door. Pickpocket it off him or wait in the room watching through the keyhole. As the guard comes near you, grab him and hide his body in the shadows nearby after choking him out and then take it from him.

When you are in the interrogation room take the explosives from the safe and go back outside. The door across the hall will now be open. There is also an audiolog here that you can listen to if you want to.

There will be two guards patrolling the maintenance yard. Taking them out is advisable as this will assure you can come back to this yard without any worries when challenging the next area.

The prison gate is divided into two parts. The first part is covered by three guards. One in each of the two booths and one outside. The second section of the gate has two guards you need to worry about. The first of the guards is in front of the security doorway at the foot of the stairs. The second is at the top of the stairs.

To get past the first set of guards is easy. Just mantle onto the ventilation pipes above to get over the heavy security door. Choke out the two guards in the second section of the gate. If you do not do this, they will surely see Corvo when he blows the door up later.

After setting up the explosives crawl into the metal container near the door. By hiding here you will be close enough to the escape route and at the same time protected from the explosion that is about to happen.

When the fragments of the door are sky-high wait until all the guards have returned to their positions and then step outside to dive down into the water. You will find the sewer entrance directly across from the broken stairs where you exit the prison from.

The only foes you will find in the sewers are the stinking rats for a while. Killing them does not affect your Clean Hands and Ghost achievements.

As you enter the sewers, enter the first room and use the crates opposite to climb the grating and go to the next hallway. Here, you’ll know why you need to stay away from the rats at all costs.

Do not let the rats gang up on you though, they can kill you if that happens. You will find a valve wheel that is blocked by a dead body, along which you can find a journal. Move the corpse out of the way and turn the wheel.

To turn the next wheel you need to distract the pack of rats surrounding it. Take one of the corpses dropped in the sewers and throw it as a lure for the rats. With the rats interested in something else go on and turn the valve to open the exit.

This crank will open the path which will lead Corvo in a passage to Cistern where City Guards will dump two bodies.

Once you are in the chamber with the chain hanging in it. Climb all the way to the top of the chain and jump to safety. Corvo is equipment is not far off now, but first you have to deal with some crossbow traps.

The traps can be avoided by either throwing some debris such as a bottle to set them off or by carefully locating and disabling the launchers which also gives you a incendiary bolt.

One trap is the near the foot of the stairs. Second one is the near the off-shoot with some valuable items. Disarm these traps by going near them and when you have done that, you can trip the trap wire without any consequences.

You will locate Corvo’s gear in a traveling trunk. The trunk contains his armor, crossbow and incendiary bolts.

There are only four guards when you drop down to the final section of the sewers. However, if you had alerted anyone before that to your presence, there may be more guards waiting. After dealing with first guard you can go past the next three guards through two ways.

Either you can dive underwater and swim to the exit or travel upon the pipes over ground to avoid detection. Interact with Sam the boatman outside to effectively end this mission.