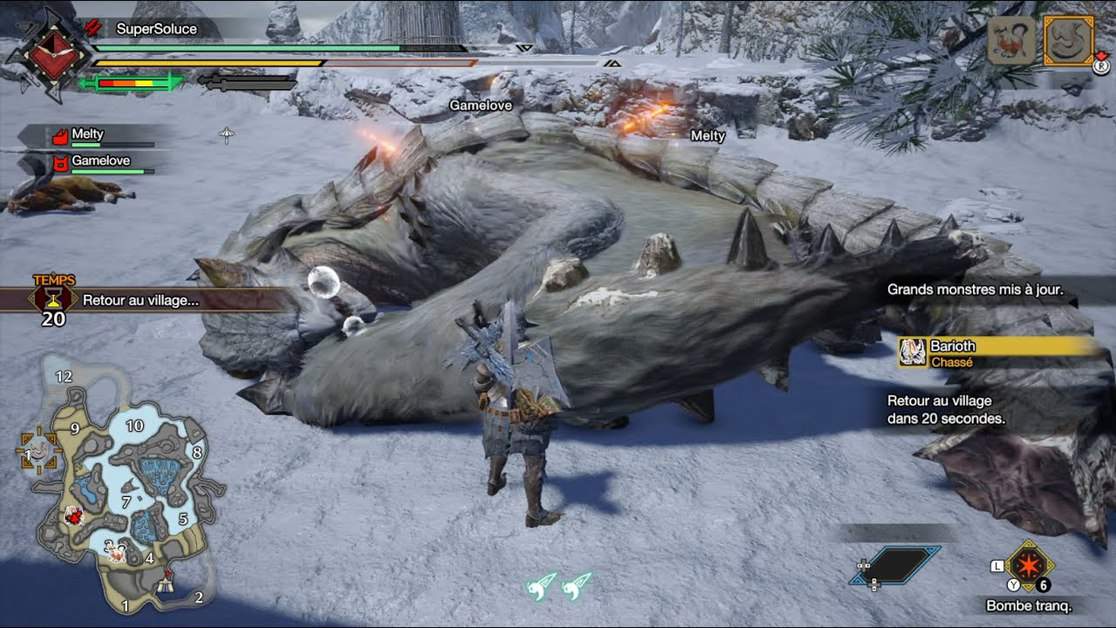 This is a detailed guide on How to Defeat Barioth in Monster Hunter Rise. It includes all of Barioth’s stats including weaknesses, resistances, affinities, breakable body parts, what loot does the monster drop, and a suitable strategy for taking down this Ice Beast in MHR.

Where Can I Find Barioth in MH Rise?

Barioth is a Flying Wyvern of the Ice element which was first introduced in Monster Hunter 3. This beast can use its sharp claws and tough skin to maneuver on slippery ice with great finesse.

In MH Rise, Barioth is a very aggressive beast and will attack any hunter or beast that dares to enter its domain. It resides in cold habitats like the Tundra or the Snowy Mountains.

You have the best chance of finding it in the Frost Islands. It can also be encountered in the following quests:

Do note that using a Flash bomb causes the Barioth to go into rage mode. If you want to avoid that then don’t opt for the Flash bombs. The wings and tusks on a Barioth are breakable which makes the battle a lot easier as it reduces the beast’s dodging abilities.

The Tail can also be cut off. Breaking the spikes on its forewings severely reduces its attacking speed and also causes it to stumble on the ice.

Barioth has a one-star rating for all ailments of the game, except for two, for which it has 2-star rating. These two are Blast and Fireblight so it’s your best bet to focus on delivering these to the monster.

It can slide around the Icey battlefield using its claws and fangs making it very difficult for you to keep up with it and counter incoming attacks.

The Barioth can use its strong tail like a club to throw you away if you are careless around it. If you get hit by the tail, it will also cause the Iceblight status.

Barioth spits out an ice ball which causes a tornado to erupt. This tornado causes the Snowman Status effect. But it can only perform this attack when it’s not fatigued.

The Barioth can also do side jumps and dodges to defend itself.

Start the fight with a heavy attack on the Barioth’s head and then follow it up with thunder or fire attacks. By the time the beast regains footing, you would have made a substantial dent in its health bar.

Your best chances at dealing damage are through Blunt and slash attacks, and using fire elemental damage. Aim for the spikes at the beat’s winged forelegs, to cripple its maneuverability.

Be careful of its iceball attack. Keep dodging until the Barioth stands still and goes for the ice ball attack. That’s when you can run up to him and get a few hits in.

Try to break the spikes on its forewings to ground the beast and restrict its defensive and offensive abilities.

If you go too close without breaking its wings and tail first, the beast will bounce around quickly and attack you with its fangs.

Try to wear the Barioth out and then mount it. Mounting the beast allows you to slam it into the adjacent walls.

Once you’ve done enough damage, it may try and flee to the other field. Chase it and start the fight again. You have to be very careful as the Barioth can be very tough to deal with in rage mode. Rage mode is identifiable when the beast glows and attacks faster.

The tail swing has a very decent reach so don’t put too much distance between yourself and the Barioth. It can also fly up and hit you with the ice ball attack.

The Barioth can also stun you with its scream. To counter the scream, you will be needing earplugs.

The following table lists out the loot which is obtained when hunting a Barioth depending on which body parts you cut off.

All these item drops from the Barioth in MHR can help you craft/forge and upgrade a variety of Weapons. We will list all of them below:

Similar to the weapons, all these item drops from the Barioth in MH Rise can help you craft/forge and upgrade a variety of Armor. We will list all of them below: