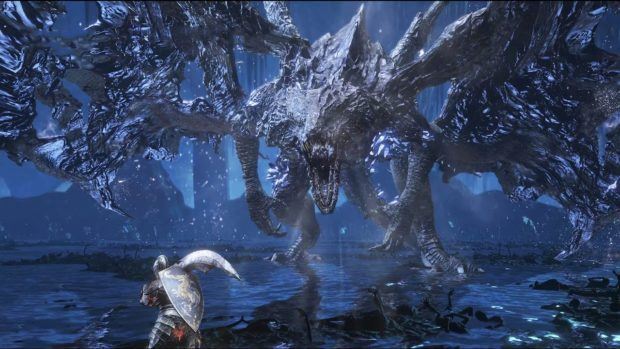 This Dark Souls 3: The Ringed City Darkeater Midir Boss Guide will help you with Darkeater Midir boss and will guide you on how to trigger the boss fight and how to defeat him.

Raised by the gods, Midir is the descendent of the Archdragons and is given the responsibility to eternally battle the dark owing to its immortality and even after the gods perished it didn’t forget its purpose.

For more help on Dark Souls 3: The Ringed City DLC read Halflight, Spear of the Church Tips, Demon in Pain, Demon From Below and Demon Prince Tips and The Spears of The Church Covenant Guide

Darkeater Midir is located in the Ringed City. To reach it, after opening the shortcut near the Ringed Inner Wall bonfire head down the lift and hop out to the door on your left that will appear on half way down the lift.

From there go left and open the illusory wall to the right of the ember laying there. Drop down the ladder into the shrine area and then drop down the hole that you will find behind the altar.

To Trigger this boss fight you must have faced Darkeater Midir past The Swamp. You will have to cross the stone bridge that Midir constantly fires up and make your way to the ruined stairwell. There will be another bonfire and Midir will be waiting for you on the other side.

All you have to do is drain its health and knock Midir off the cliff and after that, he will be waiting for you in his boss room. Also, knocking Midir off will not earn you any souls, it is just a pre-requisite starting the boss fight.

The Melee Strategy (Tail)
Darkeater Midir is vulnerable to lightning and attacking at his head will deal double the usual damage, however, this boss can’t be parried.

Try to hit its tail whenever the opportunity presents itself. Dodge its tail whip when it turns around and try to hit him on the head if you find the opportunity. Also, it is recommended to use a weapon with 500+ AR as Darkeater Midir is heavily defended.

The other Melee Strategy (Head)
Another way to take out Darkeater Midir is by staying close to its neck. Dodge its claw swipes and charges and in between its attacks hit it on the head, just make sure the weapon has a high physical damage.

When Darkeater Midir attempts to do his area of effect fire blast run far out in front of him and you will not take any damage. Remember do not run far out in behind as you will suffer the consequences. Now Run back to your spot near the neck and repeat this procedure.

As Darkeater Midir flies off into the air and doubles back breathing fire on the ground, just run towards the left and if timed properly, you will not receive any damage.

As the second phase begins, he will channel the dark energy that will promptly explode in a large area and will deal a significant damage. Just roll and dodge to avoid damage as this attack can potentially one-hit-kill you.

When he breathes fire afterward this is your chance to attack his head but be careful of the dark beams that will follow.

As he summons the dark orbs from the ground, try to get a few hits in and dodge them, this move isn’t too bad and can usually land you a few free hits if dealt with correctly. Just repeat these steps and you will be able to defeat the Darkeater Midir.

The Magic Strategy
Midir is extremely resistant to crystal and dark magic, so in case you are playing as a sorcerer, then don’t waste them while fighting it because it will be of no use. Instead you can use pestilent mercury.

Cast this spell on its right arm from under him, doing this will help you save yourself from mercury when you get near the bridge in the first phase to save yourself from the fire. This spell will be very helpful for you. Stay close to its left arm and you won’t be affected by its dark magic attack.

When the second phase of the fight starts, you need to be extra cautious. His moves are predictable and after them it is rendered immobile for an extended duration during which you can do massive damage from using pestilent mercury.