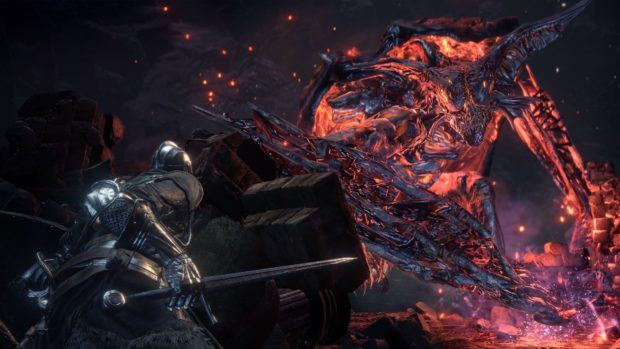 This Dark Souls 3: The Ringed City Guide will help you with Demon in Pain and Demon From Below boss fight and the Demon Prince boss fight.

Demon in Pain and Demon From Below boss fight is a tough boss fight as you will be fighting two demons at once while both will be switching their attacks on the fly. However, this is just the first phase as defeating them will trigger the second phase of the boss fight, which is The Demon Prince.

For more help on Dark Souls 3: The Ringed City, read Lapp NPC Locations Guide and How To Join The Spears of The Church Covenant.

Demon in Pain And Demon From Below can be found in the drop that comes right after within the Earthen Peak Ruins Bonfire. These are actually two demons that you will have to face at once and both have similar attacks modes and they keep going back and forth with these.

The other attack mode is Burnt out attack mode. After executing a fiery smash the boss will exhaust its flame and will look burnt out. The boss will then attack you with toxic ranged attacks and will claw you if you get too close.

Also, if one of the demons is defeated the other will automatically enter the Flaming Attack mode if it was in burnt mode.

Focus on the boss who is in the Flaming attack mode as the ranges attacks from the Burnt Out boss will be easily dodged.

You will need to dodge-roll the shit out of yourself. Though you also need to stay wary of the other demon who’s hanging back and spitting out toxic clouds, because if you don’t concentrate, the toxic clouds will hit you while you’re dodge-rolling. Here, you can also equip yourself with some toxic-resist rings or bring a lot of Blooming Purple Moss Clumps.

Do not get too confident, take a few leaps between multiple attacks and back off to observe.

You can stun them with enough consecutive hits and then head in for a critical strike since that’ll dish loads of damage and even knock them over.

After some while, the other demon’s orange glow will fade and they’ll start puking toxic as well. When this happens, the other one will turn into flaming mode

If you want to summon a phantom then only summon one phantom to fight one boss while you fight the other one. Just stick to the basic strategy, dodge the flaming boss as their frontal claw attack leaves them vulnerable.

Both of the bosses can be staggered and are vulnerable to critical attacks, however, don’t try to do this unless you have High AR, high crit weapon or Hornet Ring.

Once way to make your life easy while facing them is to summon a host of phantoms and then lure the demons to the opening where you first drop. The phantoms will have a chance to get a plunging attack if positioned correctly. Keep these in mind and you will be able to defeat the Demon in Pain And Demon From Below, only the first phase.

Demon Prince
Demon Price is the second phase of Demon in Pain And Demon From Below boss. You can summon Slave Knight Gael and Lapp to help you with this boss and help you will require while fighting this boss.

As you defeat both demons in the first phase you will face the Demon Prince which is always in Flaming attack mode.

For this boss fight repeat the strategy for the burning demon, keep yourself behind its legs and wait for the opportune moment to attack.

Just be careful of its two attacks, its charging attack and his magma shower.

As The Demon Price charges at you, it will make some distance between you and itself and will charge at you while leaving a trail of fire in its path. There is not much you can do dodge this charge but if you are lucky it will miss you all by itself.

As for the magma shower, this attack will come following floating turret-like fire orbs attack which is followed by spewing fire in the sky after making some distance between both of you.

The Prince will also summon two fire spheres which will then shoot smaller fireballs towards you.

The Prince will leap backwards whenever he does this while releasing a gust of wind that will knock you back. Try to dodge-roll and zig-zag a bit to approach the Prince again. Do not head straight!

Whenever the Prince is about to summon a single fireball in his hand, he will throw it straight towards you. You will be able to dodge-roll yourself out of the ball’s trajectory if you’re quick enough

Do you what you have to do to interrupt the demon and you will have to do this while dodging the fireballs. However, the Demon Prince can be staggered to land a critical hit on its face. Just be patient and wait for the perfect moment to attack. Repeat these steps and he will go down.