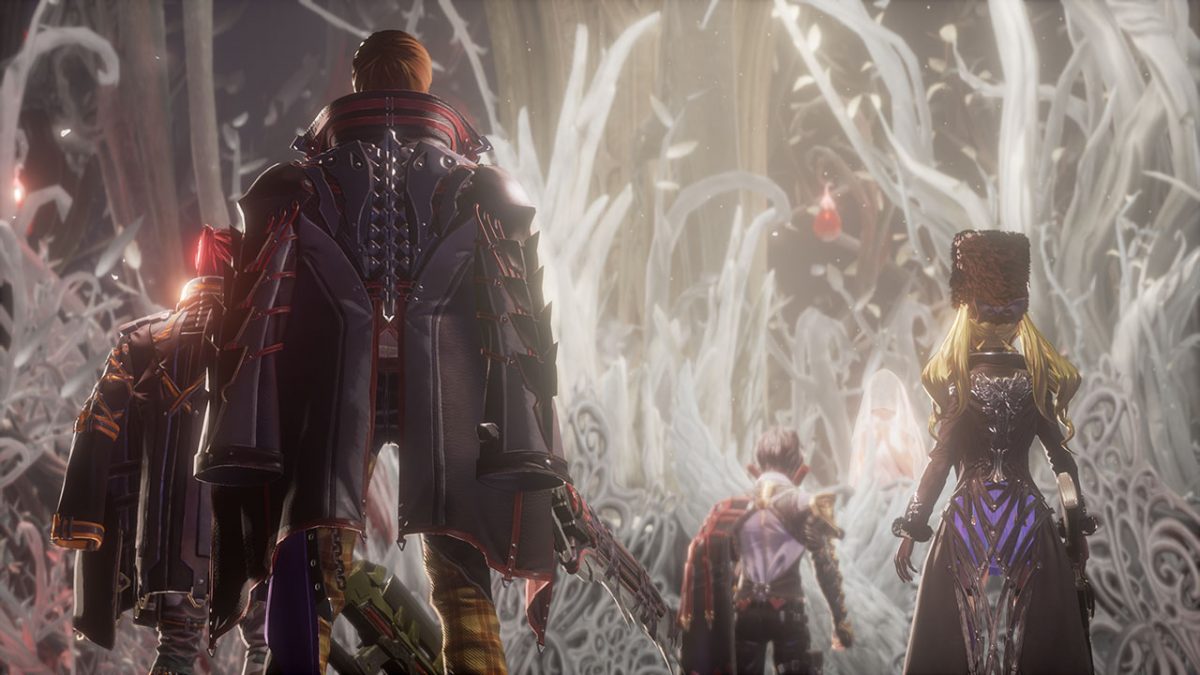 In Code Vein, you have access to a myriad of various items and gears, including Blood Veils, Blood Code, and a treasure trove of various Gifts – all of these can be used to craft the ultimate build. This Code Vein Best Builds guide is here to help you understand the various nuances of the entire crafting system, and exactly what it is that’s needed to craft the kind of build that works for you!

A build, in Code Vein, is essentially taking certain characteristics – Blood Veils, Blood Codes, and Items – and crafting a certain type of character who can utilize equipment and abilities most effectively thanks to aforementioned characteristics.

A good build is one that compliments the player’s playstyle while simultaneously working off of the character’s own unique strengths.

These Stats can be affected depending on which Blood Code you’ve chosen, and can be scaled with the aid of Blood Veils and Weapons – your stats affect your equipment which, in turn, scales your stats.

First of all, unlike Dark Souls, do not worry about picking a class at the start and wondering whether it was the best choice or not.

It doesn’t matter since you can switch from one class to another whenever you wish to (even during combat) so you have the freedom and space to experiment which each Blood Code and see what suits you best. You can also upgrade each one to see just how much is truly available to you.

You’re also allowed to ‘inherit’ certain skills: you can equip skills that belong to a skill class different from the one you’re currently using. However, that comes later down the line, you’re far more restricted at the beginning of the game, but that’s only to not overwhelm you with information.

At this point, I can imagine you scratching your head and wondering what exactly all of these terms (Blood Veils, Blood Codes, and Gifts) mean. To familiarize you with this jargon, look below to see the definitions of these terms:

Now that you’ve familiarized yourself with the in-game jargon, it’s time for you to understand the complexity of the Blood Codes – although Gifts are of inarguable importance, you do need access to them first and that’s where the Blood Codes come in.

This Blood Code is meant to enhance the player’s close combat capabilities; specifically, it enhances your Strength, Health, Stamina, and Defense.

This Code offers very little Ichor (16) so you won’t be able to use your Gifts for long. It offers a total of 5 Gifts.

This Code is about increasing your defense and overall chances of surviving any encounter. It does not offer much in terms of offense, therefore it’s recommended for any player who wants to use the Ranger Gifts to inherit Gifts from other classes along with this, as that will up your chances of victory significantly.

This, too, has 16 Ichor, so abilities will run out quick. It has a total of 6 Gifts to offer:

The final default Code available to you is the Caster Blood Code; this specializes in providing you with powerful attack based Gifts, ones you can use from a distance. It also provides you with 30 Ichor, so you won’t be running out anytime soon.

However, it only provides you with 4 Gifts – I see this as the perfect excuse to inherit some Gifts from one of the other 2 Codes. The 4 Gifts are:

Looking at these 3 Codes, you get a solid grasp on how Codes and Gifts work in the game, and what exactly it takes to create a proper build.

If you prefer close quarter combat, you’ll want the Gifts offered in the Fighter Blood Code, but the lack of Ichor is a problem – so you choose the Caster Code and inherit Gifts from the Fighter and even Ranger Blood Codes.

When you gain the ability to inherit, that’s when it becomes all the more important to focus on your build.

However, these are only the starting Blood Codes, there are FAR more for you to discover and exploit. This guide will not cover every single Code as it’s not necessary. What is necessary is for you to understand how a build needs to function.

Look at the Gifts of each Code, look at the amount of Ichor you have at your disposal and how much Ichor each Gift costs to use.

Knowing this will help you create the best build as you’ll be able to mix and mingle with each Code and create a build for which you cherry-picked the best abilities that suit your needs.

One thing to note is that each Code has a cap on how much Ichor it can offer you, e.g. the Fighter Code can have a max of 36 Ichor, whereas the Aset Code has a max of 60 Ichor!

Therefore, max out the capabilities of each Code AND Gift (doing so will allow you to inherit that Gift). When you’ve done so, you’ll have access to everything each Code has to offer and then you create your dream build.

However, things don’t simply end there – what about the Blood Veils?!

Blood Veils allow you to gain some weight and give you access to Drain Moves (using this can increase your Max Ichor count), but most importantly, they scale your Stats.

Meaning that a certain Blood Veil can increase your current stats in conjunction with whatever Blood Code you’re currently sporting and what Gifts you have equipped.

Blood Veils augment your weapon’s capabilities and also have a large impact on your Stats. Let’s say that you want a build that gives you immense Strength, or a build where your primary Blood Code is that of Caster – what will scale your Stats considerably will be the GXH Assault Blood Veil.

You have to ask yourself: what exactly is my strong suit? The answer to that question will determine exactly what kind of Blood Veil you actually need.

Depending on the Gifts you’ve equipped or inherited, the Blood Veil may prove to be an incredibly powerful asset for your build.

Finally, you must select a weapon that will be augmented by the Code you’ve equipped, with the Gifts you’ve selected and inherited, and the Blood Veil you currently have on. It’s not so much about the Weapon affecting them, it’s more about those things affect your weapon.

The Code and Blood Veil can drastically increase the Attack Value for the weapon you’ve equipped, or perhaps it can increase the weapon’s mobility, making it easier and quicker to use.

With all this in mind, the following is an example build that showcases just what you’re capable of if you comprehend every, single aspect of the build, and carefully make the most appropriate of decisions in regards to every facet.

Blood Code
You can start off as a Caster with regards to progression until you attain Isis. You can play around with Darkseekers but that’s not needed for now.

Lastly, you’ll end up on Harmonia due it having access to Willpower and S scaling along with a high Inchor stock. As for the remaining spells, you can just unlock them for the moment since they’re not needed for use.

Blood Veil
Your main focus while looking for Blood Veil should be the Suicide Spur. If your mobility is not affected, make sure to go with fortification as it gives a high amount of damage in defense.

Weapon: Argent Wolf Balde Devour
Even though the weapon is unlocked very late into the game however, it provides you with a decent mobility therefore, is the best choice of weapon in the game.

Having Gifts like Health Stimulant is a go-to choice if you’re looking for health enhancement as it helps you last longer during battles with late game bosses.

You want to start off with Eos straight away without wasting any time. You can view others such as Queen or Demeter but you won’t be needing them after choosing the best choice for this build, Eos Blood Code.

Blood Veil
Noble Silver Fortification is the Blood Veil to go with in this build. It provides you with an increase in support gifts.

Weapon: Argent Wolf Blade
You can find the weapon by defeating the enemy guarding the chests with the Raven Fatigues, at the decayed ship interior. You’ll find the location at the Dried-Up Trenches Area on the map.

Passives such as the Swift are one of the rarest buffs that affect spell damage.  Using the buff with quick mobility is going to give you extra 20% increase in spells

Blood Code
Start off with Demeter. Demeter possesses higher strength and mind values which are integral parts of this build. Apart from Demeter, you can also Hades for this build.

Blood Veil
GXM Strange is the build you’ll be using in this build.

Weapons: Oni Bane Fortification
An amazing two-handed weapon for the build relatively larger in size than most of the sword weapons. Its swings while moving and can acquired from Yakumo Shinonome.

Blood Code
Start with the Queen Slayer Blood Code. It provides you with 5 gifts and has High Endurance, HP and all rounded melee combat.

Blood Veil
Noble Silver is the Blood Veil you’re using in this build. It has a good number of offensive and defensive stats that will help you during your play.

Weapon: Executioner
A one-handed sword capable of cutting the opponent’s flesh with a single cut. This weapon is acquired from Jack Rutherford. Alternatively, you can use Iceblood if you want, depends upon your taste in weapon selection.

You’ll have spells that work for every situation, so switch them out whenever you feel the need to (this means spending a lot of time mastering each spell however). Be vigilant of the ‘Leak Status’ effect, and use an Ichor Coagulant to counteract it.