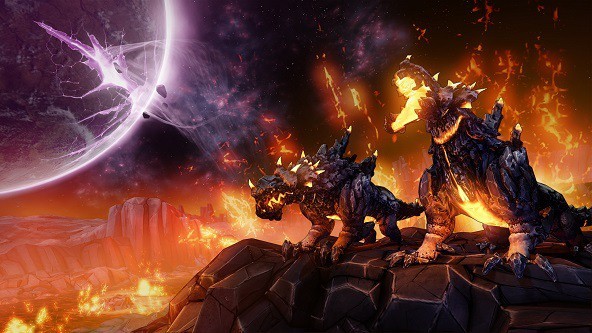 Unlike other Vault Hunters who rely on ranged combat, Athena is meant to be taken in the heart of the battle.

She’s arguably one of the strongest Vault Hunters in the game and an obvious choice for anyone who prefers continuous action.

Her increased speed, melee charger, and a shield to absorb damage enable her to survive the toughest of the battles.

Like I’ve mentioned earlier, Athena works best when taken in the middle of a heated battle due to her weak ranged attacks.

When playing with Athena, positioning her is extremely important because her shield only absorbs damage up front.

Phalanx
This skill tree revolves around survivability and team buffs. It focuses on keeping Athena alive and keeps her party members under protection.

One thing to keep in mind is that this skill tree is heavily dependent on Kinect Aspis and extra caution is required when her shield is down.

Luckily, the cooldown time for her action skill is quite low and you won’t face much difficulty keeping her alive.

With that being said, this skill tree is obviously more team-oriented. You’ll be able to revive teammates from a distance with a combination of Wrath of the Goddess and Clear!

However, I wouldn’t recommend it while playing solo for obvious reasons.

Xiphos
Want to play solo with Athena? This skill tree has everything you need. It basically revolves around a mix of decent damage output and survivability with high mobility.

Furthermore, mix it up with Phalanx to get super-charged melee and insane damage output. However, always keep a close eye on weapons with Bayonets.

Basically, you need anything that enhances Athena’s melee damage output to be further complemented by many of the skills in this skill tree.

As you can see, this is more dependent on increased melee buffs so you’ll have to stick to short ranged combat and increased mobility. If you don’t wish to go with it, read on to know more about Ceraunic Storm.

Ceraunic Storm
This skill tree contains insanely strong elemental effects and one of the best skill trees when it comes to Vault Hunter Mode.

Like I’ve mentioned above, Athena mostly works well when it comes to staying in the middle of the crowd. However, with this skill tree, Athena is able to pull off ranged damage.

Since at the beginning levels, enemies are not much tougher to take out, there are chances that you’ll find this skill tree to be quite dull in the beginning, but as you progress through the game, you’ll unleash its true potential.

Build #1 – Athena the Tank – Click to View Build
The first thing that we’re going with is Ephodos which will increase your Movement Speed and Gun Damage by 20% while holding Aspis.

The next thing that we’re going with is ‘Hold the Line’ which increases the duration of Aspis by about 5.5 seconds. This will almost equalize the amount of Aspis and the cooldown time of the skill.

Next up is Vanguard which will allow your allies to gain HP which will increase as you absorb more damage with Aspis.

With Prismatic Aegis, Athena will be able to absorb different types of Elemental Damage from different bosses and foes and then deal Elemental-Damage to those foes.

The next skill that we’re going to upgrade is United Front which will not only increase Athena’s shield capacity, but 25% of the damage absorbed by Aspis will be converted to your shield and your allies’ shield which will pretty good to make a tanky Athena.

With ‘Clear!’ you’ll be able to revive your allies within range and also increase damage dealt by Athena while in Fight for your Life. This will allow Athena to become kind of a healer while she absorbs tons and tons of damage.

The only reason you need to go with Stalwart is because it will increase Athena’s maximum health by 25% and it also works in synergy with United Front because it allows Athena to absorb 100% damage from her allies’ guns.

Prepare for Glory will allow Athena to divert enemies’ attention towards herself and increase her Gun Damage. This is again a useful skill when it comes to take all the damage while your allies deal all the damage. And lastly, complete this skill tree with Wrath of the Goddess.

In the Xiphos skill tree, go with Gun Kata to increase your Gun Damage and Melee Damage by considerable amount.

In addition to this, go with Clarity of Purpose to further increase the Melee Damage and maximum HP by 15%. With increased Melee Damage, you need to spend points in Rend to cause Bleeding effect to your enemies and increase DoT.

Lastly, spend the remaining points to Mercurial which will increase your Movement Speed and Damage Resistance which will further increase her tanking ability.

Build #2 – The Melee Attacker – Click to View Build
With this build, you need go with Gun Kata to increase both Gun Damage and Melee Damage. Next skill you need to upgrade is Clarity of Purpose to further increase Athena’s Melee Damage and Maximum Health.

Next skill you need to upgrade is Omega-Senshu which will let Athena deal increased damage to those foes that have less than fifty percent HP. This will work great against bosses in co-op mode.

The next couple of skills that we’re going to upgrade are Bloodlust and Rend. With Rend, you’ll be able to inflict ‘Bleed’ status on enemies and have increased DoT.

While enemies are under ‘Bleed’ effect, Athena will receive increased HP regeneration which is pretty good. Go with Tear to further complement the other two skills.

With Tear, you’ll be able to deal increased damage to all Bleeding targets. Lastly, go with Blood Rush which will let you dash towards enemies for a melee attack.

Build #3 – Melee Athena – Click to View Build
The first couple of skills that you need to go with are Clarity of Purpose and Gun Kata to increase your Gun Damage, Melee Damage, and Health Regeneration.

You’ll be able to further increase the effects of these skills with right class mods. The next thing that you need to upgrade is Omega-Senshu which will let you deal increased damage to all enemies with fewer than fifty percent HP.

The next set of skills that you need to upgrade revolves around bleeding enemies and gaining HP from these enemies. To get started, go with Rend, Bloodlust, and Blood Rush.

Rend will allow you to bleed enemies, but complementing it with Bloodlust will allow you to gain HP regeneration from bleeding enemies. With Blood Rush, you’ll be able to keep all these skills going on in a chain which is somewhat difficult to do.

Now get to Phalanx skill tree and completely fill in Ephodes and Vanguard to gain increased health regeneration, Movement Speed, and Gun Damage while Aspis is activated.

To get to the next set of skills, you need to spend a point in Prismatic Aegis. This skill is also pretty decent and allows Athena to absorb Elemental-damage from different foes and then deal that absorb damage to them.

In order to increase the duration of Kinect Aspis, spend in points in Hold the Line which is pretty great.

The last couple of skills that you need to upgrade are Return Fire and Wrath of the Goddess which will allow you to reflect enemies’ projectiles. For the remaining points, you can spend them in any way you want.

Build #4 – Defensive Athena
The first skill that you need to upgrade is Clarity of Purpose to gain increased Melee Damage and Maximum Health. Go with Omega-Senshu which will allow Athena to deal more damage to all enemies who has fewer than fifty percent HP.

Since we’re trying to go with a defensive building, spend in Mercurial which is a Kill Skill and allows Athena to gain Damage Resistance and Movement Speed after killing an enemy.

Throughout my Athena builds, I’ve used Rend because it’s extremely good to use. With Rend, you’ll be able to Bleed enemies and have increased DoT. This damage is further increased against enemies having higher HP.

The final skill from this skill tree is Epicentre which will allow Athena to pull off enemies near herself. This is pretty useful if an enemy is dealing damage to one of your party members.

Next skill tree that we’re going with is Phalanx. In Phalanx, go with Ephodos to gain increased Movement Speed and Gun Damage while holding Aspis. Vanguard will allow Athena and her allies to gain HP while Aspis is activated.

I’ve put one point in Hold the Line to somewhat increase the duration of Kinect Aspis. Prismatic Aegis will allow you to absorb all kinds of Elemental-damage and then deal that absorbed damage to enemies.

‘Clear!’ will allow you to revive your allies from a distance by throwing your Kinect Aspis.

United Front will allow you to increase Shield Power/Capacity of Athena and her allies by absorbing damage by Aspis shield which is pretty good to increase survivability.

That skill can be complemented by Stalwart which will allow Athena to absorb damage from her allies. For the last couple of skill points, spend them in Prepare for Glory and Wrath of the Goddess.