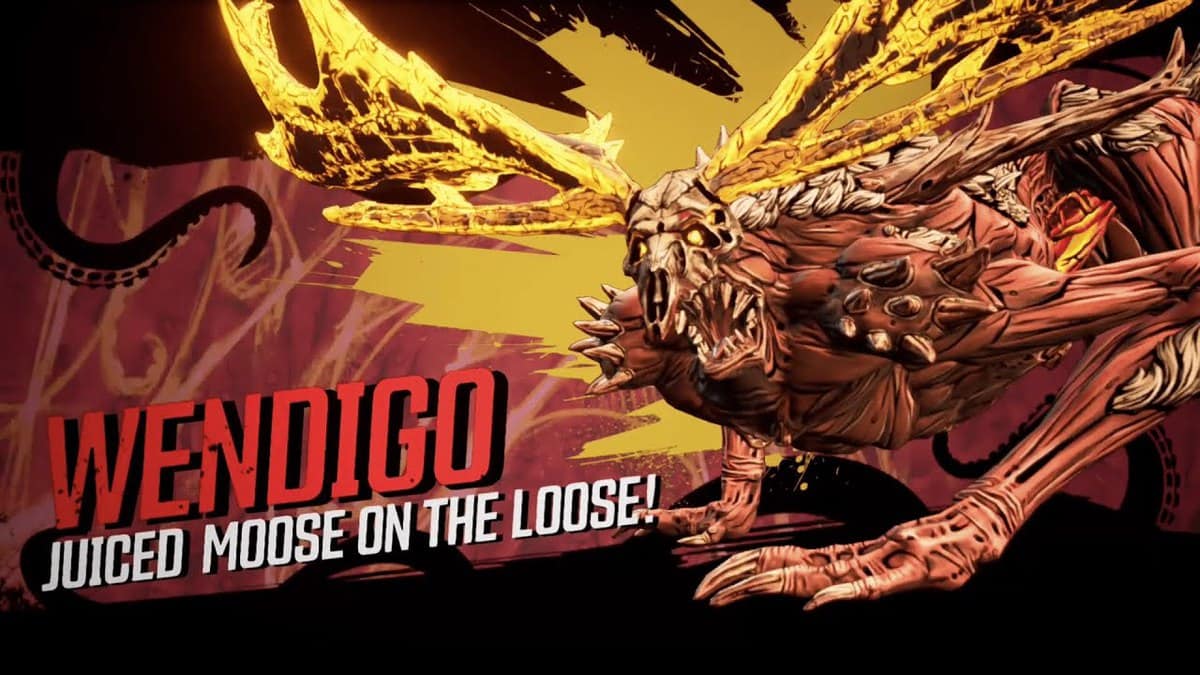 Borderlands 3’s Guns, Love and Tentacles DLC pits you against a merciless boss-fight with a flame-breathing monster with antlers; the Wendigo! We found the Borderlands 3 Wendigo Boss fight to be pretty fun and equally challenging.

In this guide, I have written down all the details I noticed during the fight; details that could help you out in taking the Wendigo down with ease in Guns, Love and Tentacles DLC.

You will encounter the Wendigo during The Horror in the Woods mission of Guns, Love and Tentacles DLC.

The Wendigo can be a menacing boss-fight considering his mobility and eerily large health pool that can be tiresome to take down. However, with a big body, comes a giant hitbox, so hitting him, for the most part, is never really a problem.

Wendigo will constantly position himself around the playing field by using the platforms and finally coming to the ground to start damaging you with vicious attacks.

Initially, the Wendigo will jump down from above and start charging at you with basic slashes; that can be extremely damaging if you aren’t careful enough. Release all the power you have at this point to take down his health as much as you can; doing so, will result in the Wendigo retreating and a phase initializing where you have to fight off pesky mobs.

He can retreat a total of 3 to 4 times, depending on how fast you can chip away at his health when he is on the ground.

Clear out all Mobs
Take care of all mobs and watch out for falling debris from the top. After a while the Wendigo’s weak spot will be exposed, that is its belly.

Target the Belly
Now, that you know of his weak spot, it’s time to unleash all hell on any part of its body that glows. Dealing enough damage will cause the Wendigo to be staggered and lay on the ground completely vulnerable to all attacks. Up until now, you will have had the opportunity to deal a ton of damage.

Flame Breath
The Wendigo will now start breathing flame balls at you, which can get overwhelming pretty quick if you haven’t been clearing mobs around you. The damage of the boss and the mobs spawning around you can quickly take you down if you don’t keep moving.

Stay Consistent with the DPS
There’s no time for slacking around, and whatever chance you get to shoot, you shoot; preferably the mobs if they get too much. Clear them out and keep the field clean so you can focus on the Wendigo itself.

Charge Attack
Throughout the boss fight, Wendigo will often try to charge at you, the indication is that he will have a glowing red eye when he does so. Simply dodge either left or right.

Use the Stagger Window
Once the boss is staggered, that’s your window to deal the most damage, use it as much as you can, and use up all your trump cards if you have any. The Wendigo boss fight is challenging, but nonetheless very doable if you understand when to attack.

Do not let the mobs get too heavy on you, and make sure to always stay mobile lest the debris get the best of you. Remember to keep a good distance, because if you don’t, its charge attack and claw slashes are going to rip you to pieces.