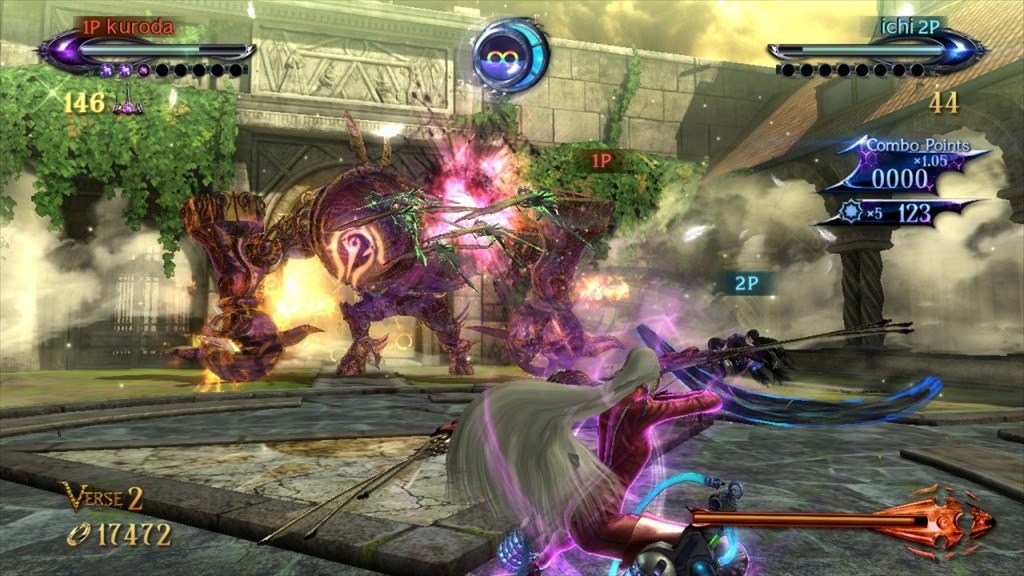 Combos are not alien to any hack-n-slash fan. It is the art which demands hours of practice, but is exceedingly rewarding once one gets it right! A combo is series of uninterrupted attacks with increasing damage and usually a powerful concluding strike.

The length of a combo depends upon a number of factors like enemy-type, choice of weapon, and interlinking attacks.

The next section is solely dedicated to beginners who yet have to fully understand the combo system:

One stereotype about Combo System is that it’s nothing, but button-mashing which is utterly wrong. In Bayonetta 2, there are Delayed Combos which require extremely strict timing to perfectly execute them.

The developers understand that it is virtually impossible to keep on attacking for indefinite period of time. Due to this fact, the game allows players to rest for six seconds before their Combo Score is reset.

If a player takes more than six seconds to add an attack to the combo, the combo will end. This is particularly useful if you run out of enemies in a particular location. You can reach farther areas and continue your combo within six seconds.

Another basic tip to increase your Combo Score is by Taunt or using Gaze of Despair. These things will enrage your enemies, make them more aggressive, and yield higher scores than a normal combo.

In addition to this, Taunts can also be used to extend combos and even acquire Platinum in certain battles. When we talk about extending combos, your guns are your best bet! After defeating an enemy, shoot your gun to automatically target a distant target and continue your combo.

Furthermore, you can also dodge enemy attacks while in the middle of a combo and then continue again. This will allow you to execute uninterrupted combos for longer durations of time.

One of the best combo techniques to use in Bayonetta 2 is Aerial Combos. These combos do not deal additional damage, but have far less chances of getting interrupted by ground enemies. Your character in the game is able to launch enemies into the air with follow-up attacks.

Buy Witch Strike and After Burner Kick from The Gates of Hell to launch enemies into the air and follow-up with normal attacks. Also, do not forget to add in some additional firepower. You can also use enemies to get into the air. Simply run up to an enemy and when you reach it, jump again to reach air.

Lastly, you will find many areas in Bayonetta 2 with boundaries. If you smash an enemy into them, they will bounce off the wall for additional attacks. This technique requires a lot of practice, but it is totally worth the effort.

Bayonetta 2 is not all about being offensive. Defense should be an important part of your strategy. Without proper training, defense can be a little hard to master. Here are some techniques which will make your defense a tad better than it already is:

The best tip that anyone can give you is to look for enemy attacks. In Bayonetta 2, enemies have certain animations when they are about to attack. Look out for these small hints and you will improve your defense to a great degree.

Similar to Jump Canceling, you can cancel an attack by transforming into animal form. This is a great technique if you see enemies preparing an attack. A similar thing can be done by dodge canceling.

Like I have mentioned above, combos can be extended by Dodge Offset. However, this can also be used in defense. To execute this, hold an attack button while dodging between a combo and you will continue the combo from where you left it. Similar to Dodge Offset, you can also use Animal Offset to improve your defense and extend combos in a battle.

Stiletto
How to Execute: Push left analogue stick in enemy’s direction twice and press punch (can be executed in the air)

You can use this technique to cover large distances or to start a battle. It is ideal to extend your combos and quickly reach a target.

This is similar to Stiletto, but can only be performed on ground.

Tetsuzanko
How to Execute: Push left analogue stick backward then forward and press punch (can be executed in the air)

This attack definitely packs a punch! Think of it as a charging attack which can be performed while in the air.

Heel Stomp
How to Execute: Push left analogue stick backward then forward and press kick (can be executed in the air)

You can think of this as a kick-version of Tetsuzanko. It comes down as a vertical kick instead of a horizontal one.

Breakdance
How to Execute: Press and hold evade button

This attack is best for crowd-control and clearing out hordes of enemies in a short duration of time. During this attack, Bayonetta spins around the battlefield and attacks with her guns.

Witch Strike
How to Execute: Jump up and press punch (can be executed in the air)

This is one of the best launchers in the game which can also be used while in the air. During this attack, Bayonetta sends her foes into the air and follows up for additional attacks.

Witch Twist
How to Execute: Press and hold evade followed by quickly pressing and holding punch button (can be executed in the air)

This is another launching attack which can be performed while in the air.

After Burner Kick
How to Execute: Press kick button after jumping into the air (can be executed in the air)

This is another launcher which is executed by kick-attack. You can use this attack as a combo starter or ender. Similar to other launchers, this one can also be executed in the air.

Heel Tornado
How to Execute: Press and hold evade button and press kick button (can be executed in the air)

Think of this as a kick-variant of Witch Twist.

This is a charged shot from Bayonetta’s blazing guns which has a large damage output.

Panther Within
How to Execute: While landing, press evade button and left analogue stick twice

This allows Bayonetta to transform into a Panther for increased speed and mobility.

Snake Within
How to Execute: While underwater, press evade button and left analogue stick twice

This allows Bayonetta to transform into a snake and explore the depths of underwater areas.

Bat Within
How to Execute: Perfectly evade an attack

This allows Bayonetta to transform into a flock of bats which allows her to negate any damage taken during that moment.

Crow Within
How to Execute: While in the air, press evade button and left analogue stick twice

This allows Bayonetta to transform into a crow and explore air for a limited time.

Umbran Spear
How to Execute: Press lock-on button twice (can be performed in the air)

This allows Bayonetta to transform into a crow and dive-kick her enemies in close vacinity.