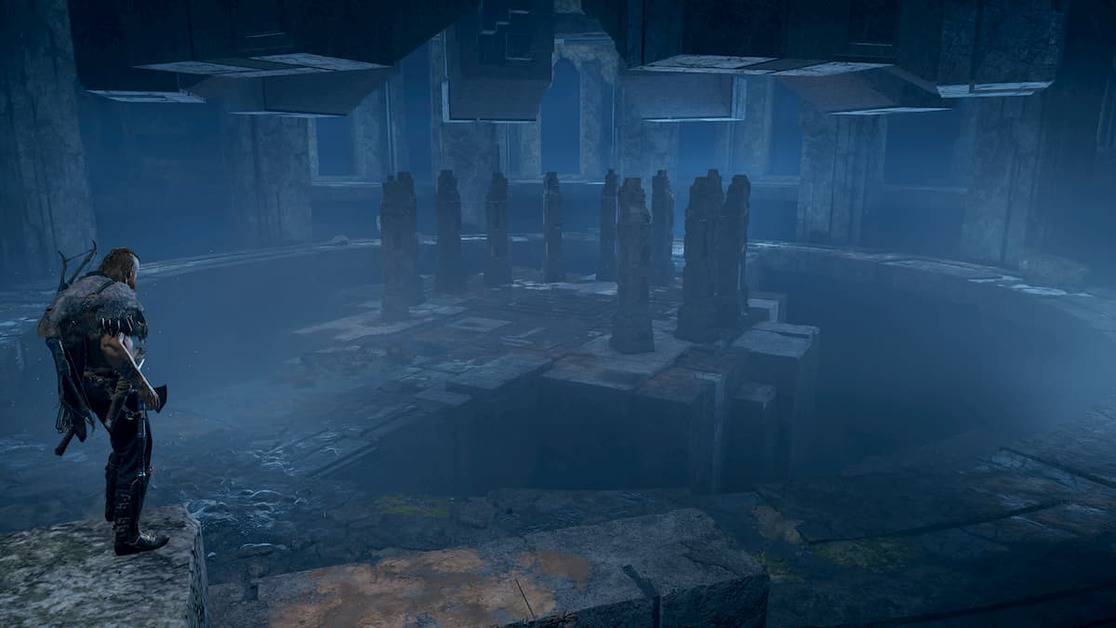 Not feeling up for treasure hunting yourselves? Don’t worry as our Assassin’s Creed Valhalla Treasures of Britain Locations guide has you covered and lists all the major treasures you can find in old Britain.

Undoubtedly, the best treasure is King Arthur’s Greatsword, the legendary Excalibur; Although finding it is easy, getting it will not be as simple.

To get the sword, you must first find 11 tablets that unlock access to it.

These tablets are actually the hidden Treasures of Britain, although more loot will also be found on each location, and some are in the possession of The Order of the Ancients members.

This treasure can be found inside Grime’s Graves, located in East Anglia.

When you reached the location marked as Grimes graves, there will be a massive hole in the ground; leap of faith into it and make your way through the linear tunnel until you reach the end, which will have you climb up and into a cursed area, in a giant pit.

Enter the pit and find and destroy the skull with Odin’s sight.

Climb out on the other side and continue along the tunnel until finally, you pass a banner.

There will be some coins and gold along with an opal; smashing the pots will get you your tablet. To get out, pull the shelf on the right.

In the region of Cent, there is an abandoned house about 475m west of Cent’s eastern most Highpoint.

Enter the house and take the ladder down; soon you’ll have to jump across a ledge.

Once you enter this way, you begin the trial and can’t leave before it finishes.

Slide down and you will see a key, The Eagle Key, hanging in the air, you have to grab it by jumping onto the second ledge, to open the gate to the area beyond.

In the next area, where there is a large statue in the middle, turn left and use the ledge to walk to the first opening available.

Enter through to reach the next room where you can find the Key of Balance, suspended in midair, you have to navigate to a jumping position on the ropes below to perform a successful jump to grab it and land on the rocky spire.

Once you have it make your way back out the way you came.

Now back in the main area, continue going beyond the first opening by any means necessary until you have reached the platform on the other side with a pit below you.

Enter the next room, and jump to catch the Key of Agility.

Use the rock steps at the back to head towards the exit, and you’ll need to interact with the object at the end of the tunnel to open the way back to the main area.

Out in the main area, keep moving on until you find the next opening, on top of a wooden platform.

To make your path accessible, you need to shoot at two clamps holing a bunch of rocks, find the clamps using Odin’s sight. Jump from platform to platform until you reach the bottom.

Shooting another clamp will release part of the ladder, climb it and then jump onto the rope, align yourself with the suspended key and jump and grab it. After which follow the same path you use to reach here to go back out into the main area.

With all three keys in our possession, jump down to the bottom of the main area, and unlock the two doors and open the chest on the right to collect a Nickel Ingot. Continue through the other door until you reach a large room.

There will be an obstacle here that can either be pushed or pulled.

For now, instead of moving it, use it to jump across and land on the other side, now keep moving and pushing the obstacle to get over hindrances and un-scalable walls; note that you can push/pull the object from multiple sides.

Finally, at the end, collect the Mysterious Chessboard Tablet and the key hanging above, use the door ahead of you to exit the cavern.

In the region of Essexe, here is an old cellar located near the southern shore of the pond south of Cocestre’s city walls.

Enter the cave, it is pretty much a straight path to the tablet, just keep moving, looting any opals, or ore you find along the way.

Finally, you will reach the Old Cellar, and for the treasure to appear, you must break off the spigots of around 8 barrels, use Odin’s sight to assist you.

After doing this, Evior will finally say enough, then go to the grate at the center to collect the treasure.

The Santlache Mine in the region of Suthsexe, holds another tablet. Enter the cave and blow up the weak fall to progress further inside.

Follow the straight path onwards, careful of the pit below, climb across to the other side, until eventually, you reach a room with a ladder.

Now go to the right and jump across the wooden posts of the next tunnel.

At the end, you will need to shoot at a clamp to release the ladder you need to climb over to the next area. Continue forward until you reach a large room.

There will be a bit, and you will have to use the ledges at the sides to cross it.

However, for something extra, go inside the pit and pull a stone block in the middle to reveal a hidden pat and some treasure.

Otherwise, from where you were before, climb the ledge until you reach a wooden post. Slide down the rope all the way to the end.

Now there will be two destructible walls, the one in the center leads to the main treasure, while the one on the side loops ab and gives small loot.

Slide down the edge until you reach a body of water. Dive into the water and continue through a tunnel underground.

Once you reach the end of the sunken tunnel, you’ll resurface in the room containing the treasure and the tablet, use another destructible wall to reach the start point of the mine and your exit.

In the Snotinghamscire region, Deoraby Spar Cavern contains the Mysterious Whetstone Tablet and is located 480m west of The Sleeping Jotun highpoint.

Through the entrance, make your way to the first ledge and jump over to the other side where you will see an altar, you need to get the key, placed on the altar.

Use the key to unlock the next area and enter.

Now make our way to the right platform, until you see a statue, climb to its top and reach the next ledge.

Make our way across to the other side, using statues and columns for support.

Make your way across a fallen statue to reach the Tablet, collect it, and unbar the door behind it to reach the exit through the tunnel.

Wiccan’s Cave in AC Valhalla houses the Crock and Dish tablet Britain treasure is located about 400m south of Olikana Tower in the region of Eurvicscire.

After entering, make your way forward until you reach an area with a tree in the middle.

An altar in front of the tree will have an opal. Climb the tree and use its branches to reach the entrance of an icy cave.

The gap will be quite large. There, however, will be a suspended rope hanging from the ceiling; use it to jump across.

There will be a pathway in the next area, which is your exit, and a hidden path that can be discovered by shattering the ice with an arrow.

In the next area, a barred door in the middle leads to the treasure room, which you can access immediately using the Incendiary Powder Trap ability.

If you do not have that then you’ll have to go to the area on the side, one with roosters and the other it oily boars.

To the right, it’s better to avoid the roosters, open a flimsy wooden door, and once inside, use your arrows on the crates next to the wall.

After this shoot at another piece of destructible wall through the metal bars, once destroyed move to the left side with the pigs.

Shoot at the pigs from the metal bars, and this will destroy a piece of wall as well, as the pigs and the ground is covered in oil.

Now walk up to the metal bars and shoot the barricade off the door. Grab the treasure and make your way to the exit we mentioned before.

Red Lichen Cave which is one of the AC Valhalla Treasures of Britain Locations is about 450m west of Wincestre in the region of Hamtunscire.

Once you enter, there are two paths it won’t matter which you take they both line up later and lea the same way.

Keep going straight until you reach the pit, jump to the suspended platform to avoid falling into the pit.

From the platform jump across the gap in rocks and grab a root, climb it to and move on until you cross over the stalagmites and drop safely to the tunnel ahead.

The way forward is pretty much a straight line, keep going until a wall of gas blocks you, just throw your torch to the gas to disperse it.

Now the path will start spiraling upwards, and keep true to it.

Clear another gas wall, jump across the ledge to reach a tunnel, throw in another torch, and be quick to pass through as this time the gas comes back after a short while.

You will reach a large area with a lot of gas walls, just throw in torches and clear the gas away.

Find and loot the treasure in the pit, and then clear the gas leading to the exit, which takes you through to the first large area, no make your way back out from here.

Reach Wocig by a large cavern just west of the Highpoint near Chepreham in the region of Hamtunscire.

Through the tunnel reach the area with the water, and a boat, use the boat to quickly make your way through.

When you reach a bloody sculpture, leave the boat and start climbing, there is a lootable chest here too.

Search near the gap that leads to the pool and take a look at the wall on the right to find handles you can use to climb to the next area.

Follow the light-colored ridges clockwise to make your way across the pool and reach the final area indicated by a brazier.

The final area is littered with oil spills and oil jars, don’t use your torch here.

Just make your way to the metal bars and soot an arrow towards the oil jars on the left, be warned you might want to get back after you fire the arrow as the whole area will light up after the explosion.

Once clear, go on and loot your treasure.  Exit through the right side of the room to find a chest.

Break the jars blocking the shelves that lead back. On the way out, dive in the little pool area to find an opal under the water.