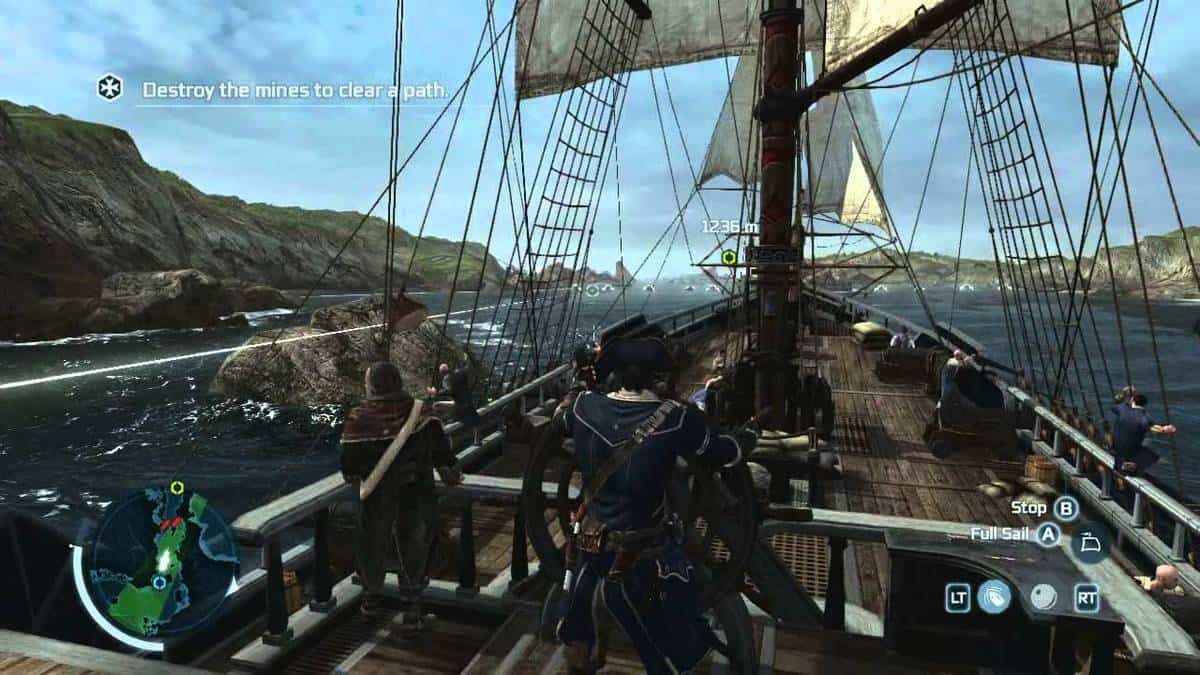 Assassin’s Creed 3 gives you murder, mayhem, mystery and all that in its important Naval Battles and related bonus objectives that are associated with some main missions and many other side quests. We have prepared a handy Assassin’s Creed 3 Naval Missions guide for you.

If you’re looking for getting synched up to the fullest, you might want to regularly take a break from your conventional leaps of faith after assassinated key targets, and instead focus on the auxiliary icons that appear on your map.

This guide will go through the bonus objectives in some of the story missions and the naval missions. You can read our naval locations and privateer contracts guide for more.

Naval Missions shouldn’t be confused with the Naval Locations, Privateer Missions and Contracts.

Limit Ship’s Damage to 50%
For achieving this, you want to get rid of the ships as soon as possible. For that very reason, you should be using swivel canons here. It really just comes down to how fast you are.

Using Mines to Eliminate Gunboats
This is fairly easy. The second set of mines has the boats near it, and you can use the swivel gun to target the mines and enjoy the show.

Limit Own Damage to 50% When Destroying Fort
To do this, you need to fully stop in front of the fort and get away from the approaching mortar fire. The latter is extremely important, and your control of speed will determine your survival. You would want to use swivel canons only here.

Limit Damage from Waves to 25%
This is fairly easy as long as you are aware. Whenever a wave approaches, you should steer into it, and duck/cover to avoid taking damage. It’s really all about awareness and timing.

Limit Number of Missed Shots to 2
Consider the dynamic weather and the waves here. If a wave gets in the way of a shot, it won’t be considered as a missed shot. Anything else will. Thus, it’s extremely important that you time your shots properly. Obviously, you should use the swivel canon.

Destroy Frigates by Firing Weakpoints
There’s a catch to actually exploit the weakpoints on a ship. You have to damage the ship a specific amount till it becomes effective. Thus, you should try and weaken the ship greatly and then attack weakpoints when the reticule becomes red.

This will require patience and you’ll probably take some damage during the process – that’s ok, because there is no objective of limiting damage.

Limit Damage to La Belladonna
Take out the smaller ships quickly with the swivel gun to limit the damage to the La Belladonna. For the larger ships, switch to some more powerful ammo to take it out.

Sink More Enemies than La Belladonna
This and the previous one work in the same manner. If you managed to take out the smaller ships with the swivel gun, you shouldn’t have any problem. Just be careful about the weather.

Kill the Officer Within the Given Time (1:00)
He’s fast and annoying. You’ll have to chase him from one end of the boat to the other. Hold X to kill him while running. Alternatively, you could do that during the chase if you somehow manage to get close to him.

Take Out The Men-Of-War Within The Given Time (3:00)
This one is pretty difficult. Firstly, you aren’t actually given a visible time limit here like the other timed objectives. Secondly, your referral position from the other ships makes it difficult for you to catch up and take easy shots – they’ll always seem to be heading away.

Ignore Biddle’s boat and head straight for them. Use Incendiary ammunition to get some shots up. If you are lucky, weak points will open up at regular intervals, which should give you some option. Good luck.

Destroy The Randolph’s Mast with a Single Broadside
Patience and alignment are the two keys here. You should try to get as close as possible, and align yourself at point blank range. Fire your chain shot from here and it should do the trick. If you do it from far away, the chain shot will take time to travel and you might miss.

Kill Biddle Only
Well, this is easy – just ignore the rest of the guys, go to Biddle, and use your Counter to beat him as quickly as possible.