How to Tame a Dinosaur in Ark Survival Evolved 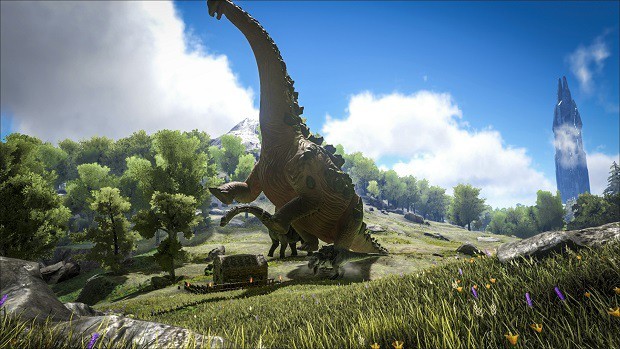 This Ark Survival Evolved Taming Guide will help players with taming the ideal dinosaurs for all sorts of situations and building up a dino pen which their peers will stare at in awe.

No matter how good the player is, without a trusty tamed dino by their side, they won’t be able to do much in Ark Survival Evolved especially as they progress to higher levels and have to venture out into dangerous areas.

Not only are the dinosaurs in Ark Survival Evolved useful for traveling around the map at high speed but they can also be used in combat to survive against players or other wildlife. A lot of them are especially useful for harvesting purposes, giving a much higher yield than normal tools.

How does taming work in Ark Survival Evolved

The most important resource required to tame a dinosaur is the food it consumes and depending on the level of the dinosaur players are trying to tame, the amount of food required can be huge and gathering it ends up being a chore.

Because of this, it is always best to tame big dinosaurs in groups rather than just one player attempting it. Before venturing out, players should stock up their inventory with food the dinosaur prefers.

Herbivores will eat berries, Carnivores will prefer meat and fish. If players have the resources, they can also use prime meat or jerky for carnivores to speed up the taming time immensely.

Depending on the type of dinosaur they are interested in, they might need to travel to dangerous parts of the island. For this very reason, it is advisable for the first build up their arsenal and has a few commonly found dinosaurs like the Raptor by the player’s side.

When players finally come face to face with a dino they want to tame, the need to focus on hitting its head with a blunt weapon like a club to knock it unconscious. While this can be easy for small dinos, herbivores, and birds like Dodo, doing this to big dinosaurs is suicide.

In such a case, players can either use a sling to hit their head with rocks or use narcotic arrows to put them to sleep. Once the dinosaur is asleep, players can approach it and put the desired food in the inventory of the dinosaur and wait as it slowly consumes the food.

While the dinosaur is being tamed, it is extremely important that the players stay close to it to guard against other wildlife and to make sure that the food in inventory or the dinosaur’s unconscious state doesn’t run out. If the dino seems to be close to waking up, players can put Narcoberries or Narcotics in the inventory and force feed the dinosaur to keep it sedated and ensure the Torpor level stays high.

Hitting the dinosaur in the unconscious state will only end up reducing the taming efficiency and reduce the dinosaur’s level or it might even wake it up forcing players to repeat the process all over again.

Depending on the type of dino and its level, it can take up to 3-4 hours to tame so players have a long grind ahead of them if they are playing the game on official servers with no speed modifiers.

Once the Ark Survival Evolved dino is tamed, players can name it, put a saddle on it so they can use it as a mount and even park it in their base provided they have built a shelter for dinosaurs.

This is all we have in our Ark Survival Evolved Taming Guide. If there is anything else you would like to add, let us know in the comments section below!