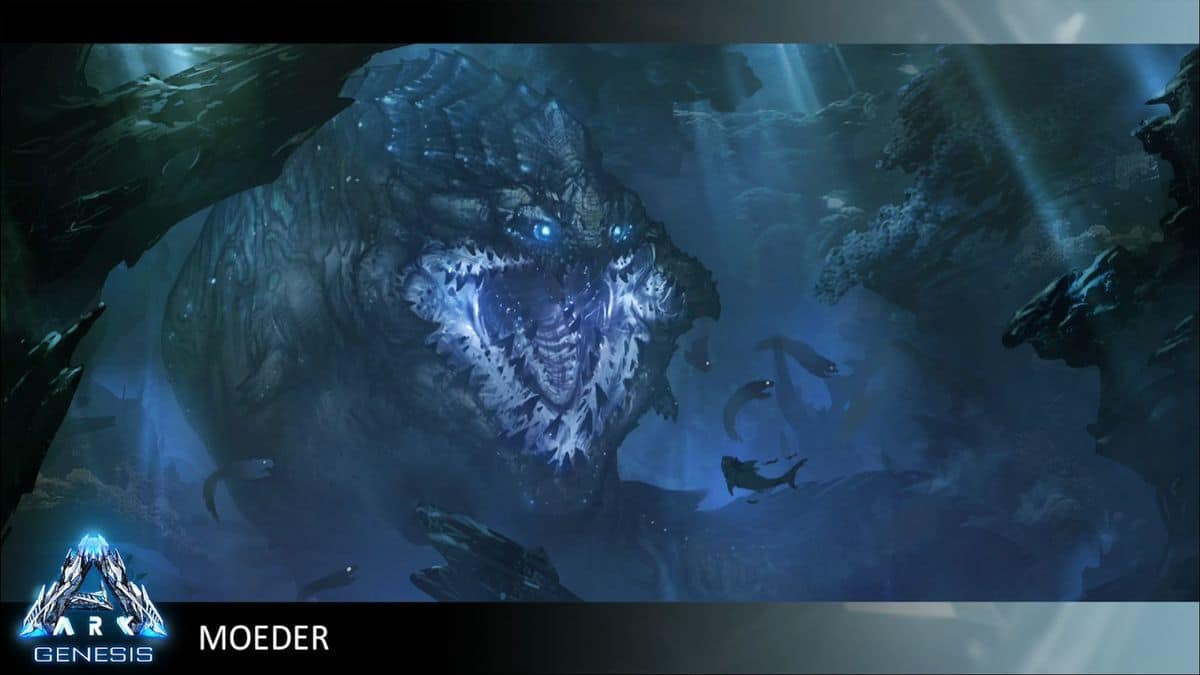 Ark Genesis provides you with a ton of tough enemies to face off against; and if you are under-equipped even the slightest, you will find yourself at the mercy of your enemy. The tough sea monster we will be discussing today is the Moeder, a giant Eel that can wipe out you and your allies pretty easily.

Moeder is a big aquatic creature with a deadly bite attack. Most of the fight will be done by his Eel Minions that have electric shock ability. We have made a complete guide on How to find and kill Moeder Boss along with Eel Minions in Ark Genesis.

How to find the Moeder boss location in Ark Genesis

The simple way to locate the Moeder boss is to use the map and follow the coordinate system. The exact location is latitude 39, and longitude 52. You can’t just go directly through these coordinates as there are hurdles in between.

First follow the path through Lat 39, Lon 52 which will take you through an underwater ancient place. You need to move in the southeastern direction from this place. Just travel along to find the Moeder boss who might be hidden behind seaweed. You can fight the boss here.

To find the exact location of the Moeder Arena, you can look at the red circle as well as a blue circle for the underwater ancient place that leads to the Moeder Arena in the map image below: 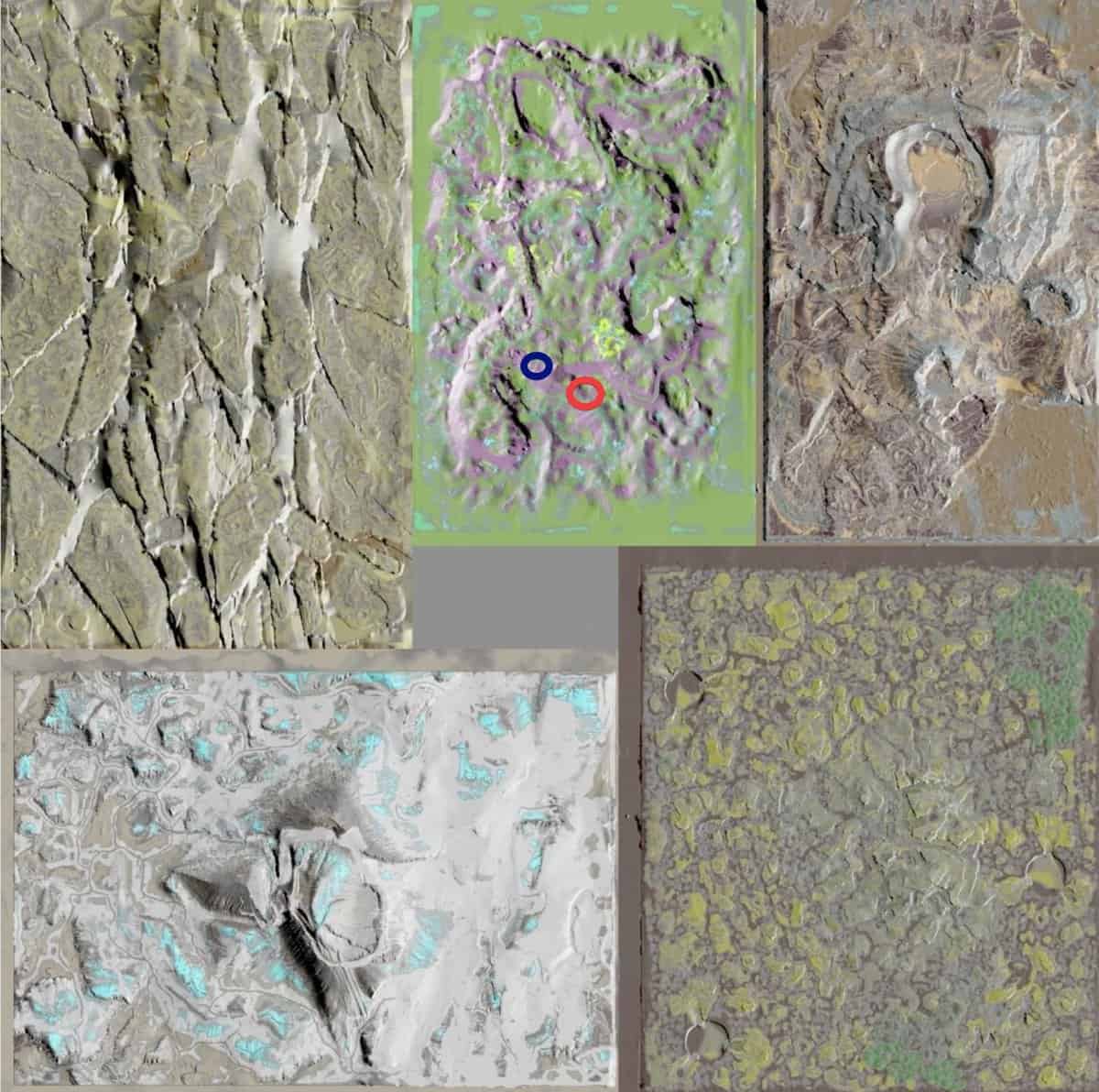 After starting the quest, you will be greeted by Moeder’s Eel minions. Fight it off to gain Moeder’s attention. It will jump out and start attacking you. Moeder is humongous in size, which means it’s easy to get caught in its melee attacks.

Moeder and its Eel Minions have an attack named shock attack when you go in close range to them. You must monitor your health as it will also kill you.  It will often do a spin attack where it will try to hit you with its tail. During the entire fight, it is advised to always remain either above Moeder or under it.

During the fight, many Eel Minions will spawn. Eel Minions are the mini versions of the Moeder boss. They can target any single creature and chase them. Eel Minions have the same electric shock ability as the Moeder.

Once they start chasing the player or any dino, they will constantly deliver electric shock until the creature is dead. They also can deliver chase attacks from behind and if you cannot turn fast enough as them, it can be very difficult to attack them.

You can use Medical Brews to use against the electric shock of the Eel Minions. Eel Minion can also heal their health when in hiding. Therefore, it’s best to kill them as soon as possible once you have started attacking them.

Once all the Eel Minions are finished, you will have to deal with the Moeder boss.  You must stay away from the mouth of the Moeder as the bite attack can deliver a lot of damage.

Moeder can also heal its health. Therefore, you must not wait in between the attacks. After a certain amount of time, your attack will not deliver any damage to Moeder because of the immunity.

The way to deal damage to Moeder is by using the weapon store in Tek Saddle. To peacefully shoot your weapons, you can distract the Moeder using other creatures such as Plesiosaurus. Moeder boss fight can be a little longer than usual and it is best to bring the Scuba tank as an oxygen source. You can also use the Megachelon to give you oxygen time by time.

The boss has total health of roughly 950,000 HP. Once you deal enough damage, Moeder will retreat underneath the ground, and you will have to face off against its minions for a second time. Repeat the same thing you did at the start of the fight and kill the minions. Moeder will once again jump out at you starting to attack again.

Keep on chopping away at its health, but remember to always keep your distance vertically from Moeder, you do not want to be at the same altitude as it, otherwise you will be rendered completely vulnerable to Moeder’s attacks.

The health pool is large, and at a higher difficulty, it becomes really hard to kill the boss alone. The more players the better. Having the numbers advantage helps in the fight.

However, the fight is manageable with a bit of time, just stay dedicated to shooting the bastard making sure to always keep your distance from it and you should be fine

Best dinos to use against Moeder

Mosasaurus is an aquatic creature with an aggressive temperament that feeds on the carnivore diet. It has the highest health and damage stats among aquatic creatures making it one of the best choices.

You can use multiple Mosasaurus against the Moeder to increase the odds. They will fight until the last breath of the die to the high stats and can easily defeat the Mosasaurus.

Tusoteuthis is another aquatic creature in Ark Genesis that looks like a giant squid. It is also an aggressive creature that feeds on a carnivorous diet. The power of the tentacles of the Tusoteuthis is huge that will crush the Moeder.

Once it grabs the opponent, it kills its prey by sucking the blood out of it just like a vampire. Tusoteuthis is best to defeat the Eel Minions that spawn between the Moeder fight. The stats of the Tusoteuthis are also good meaning that they will put up a good fight.

Megalodon is the Ark Genesis version of the shark that looks exactly like it. The literal explanation of the Megalodon name is big teeth. Because of the heavy bleed damage and its dangerous teeth, Megalodon is a dangerous creature in the ocean biome.

To make the Megalodon more dangerous, you can put the pack of 8. Together, they can defeat the most dangerous and the strongest Alpha Moeder easily. Megalodon Tek Saddle can carry double the number of weapons as compared to a normal saddle. These can be helpful if you are planning to shoot the Moeder and Eel Minions from afar.

Basilosaurus is a creature that looks like tuna with alligator jaws. They are a strong swimmer and can dive for longer times underneath the water. Basilosaurus is also immune to the electric shock attack of the Moeder and Eel Minion.

This means Basilosaurus can attack the Moeder up close. With the help of Tek Saddle, you can store plenty of weapons to make the fight more interesting. All in all, Basilosaurus is a good dino to put against Moeder.

Plesiosaurus is a small aquatic that is not a close match to the Moeder. They have good ocean speed that can be utilized to distract Moeder and Eel Minions. It is usually best to put a group of 3 to 4 Plesiosaurus as one cannot outrun the Moeder.