A Plague Tale: Innocence Chapter 12 All That Remains Walkthrough 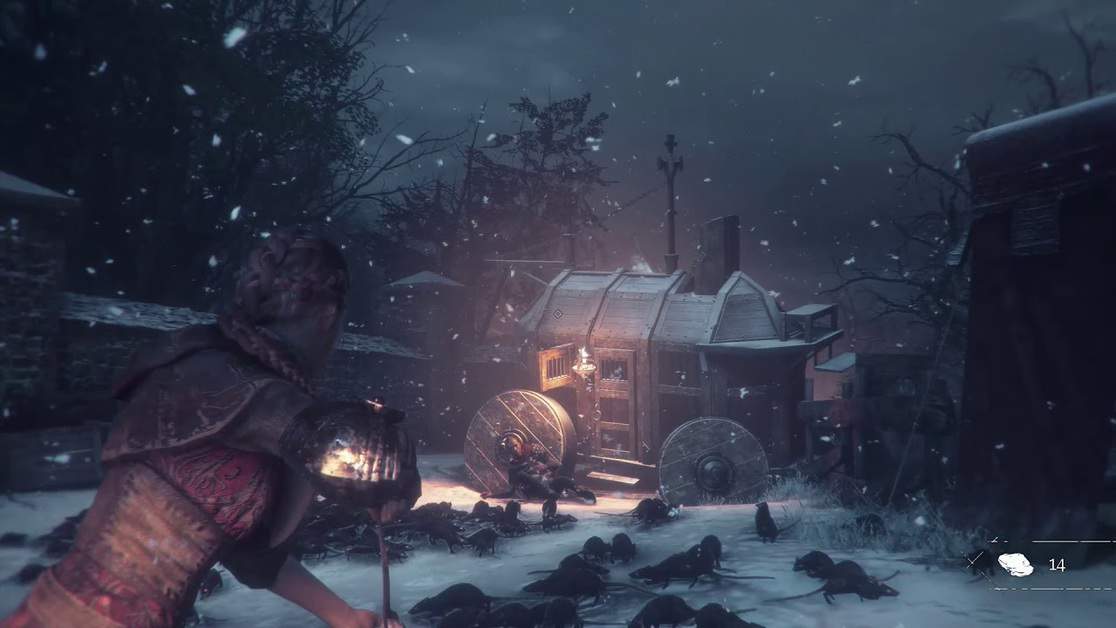 Hugo’s condition is worsening; in order to save him, Amicia and Lucas must find a way to a highly-equipped laboratory to create the cure that he needs. In this A Plague Tale: Innocence Chapter 12 Walkthrough, we’ll be showing you how to get past the swarms of rats in order to get to your objective.

A Plague Tale Innocence Chapter 12 All That Remains

The 12th Chapter of A Plague Tale: Innocence is divided into 12 objectives that you need to complete in order to bring the Chapter to a conclusion.

Hugo’s condition is worsening by the second, and to make him better, Lucas is going to require a bigger and better laboratory with the necessary equipment. Fortunately, Amicia’s mother had a laboratory back at their home.

Make your way down to the objective through the alternative path to the right (Bridge can’t be used) and cross the river.

Continue ascending uphill and turn right from the torch. The path is blocked by a bunch of rats that can be easily cleared by throwing a rock at the cart with a brazier.

Collectible: Gift 11 – Calamus can be located in the house above in the center. Simply cast Odoris to magnetize the rats and use the Ignifer to clear the path. Go under the table to find the collectible.

Make your way outside of the house and head left where you can find a few rare materials lying around in the chests within the cells. To get the materials, you’ll have to use Luminosa to take care of the rats.

Next, you’ll be finding a way to get through the door to the right since it is blocked. Follow the game’s instructions and move only when Lucas moves the light. Try not to get out of the light.

Once you see the door lock, hit it with a rock to unlock it and use the next light beam to create a safe path for you and Lucas. Save the dying guard as well on your left using the light and quickly make your way to the next light source. In order to do that, you’ll have to cast Odoris.

Save the next guard by directing the rats away from him at all costs. Avoid using Extinguis on the torch and use it on the brazier located North-West of you followed by Odoris. Once done, enter the next area through the door.

This is where Amicia will see her dead father, who was killed by Lord Nicholas. After the brief cutscene, make sure to grab yourself a bunch of Ignifer ammo.

Keep an eye out for any rats and prevent them from coming too close by using the ton of Ignifer ammunition you stocked up on previously.

After things go back to normal, get the torch and go down the hole in the wall. Take a stroll through the dining room and go into the second room where you’ll find the servant’s corpse.

Collectible: Curiosity 21 – Harnois Helmet can be found in the chest to the right of the room with the dead servant.

Head up and place your torch on the mount. Boost Lucas up and he will return the favor. Up the stairs, you’ll see a bunch of rats that pose no danger.

Continue following the rats and go into Beatrice’s study located to the right. Use Lucas to take a look at the infusions, which you’ll realize aren’t sufficient to help with your situation.

Excavate the area further and go into the next study, which will initiate a cutscene. Hugo’s room is completely undisturbed by the plague, which is quite the mystery for Amicia to investigate.

Amicia will recall secret Roman ruins within the house that could’ve been used for alchemy and might have the elixir they need.

You can’t go back the way you came from, and thus you must use the alternate door through Hugo’s room to make your way out. Yet again, you will need a lot of Ignifer ammo, so make sure you’re stocked up.

Go through the path recently opened by Lucas and continue by the lights until you find a way underground. Make your way past the garden and head to the barn.

Find the Medicine in Beatrice’s Laboratory

Prior to continuing to the secret laboratory, you can find:

Collectible: Herbarium 9 – Cinquefoil at the end of the trail.

Continue down the stairs and craft more Ignifer to cast it at the straw’s embers by the first torch on the cart and then the torch a little distance from you to create a light source. Make your way to the light source to avoid getting killed by rats.

Set the straws on fire and the torch without fail (You’ll need 4 Ignifer ammo for this). When the path is lit, move through quickly before the fire on the straws die out.

Collectible: Alchemist Cart (4/5) can be found to the left of the torch. Use Ignifer to light up the beam emitters and use Luminosa on the rats.

Get back to the cart by using the light beam.

Make some more Ignifer ammo and get ready to fend off rats. To initiate the push, light the brazier on the cart and Lucas will start pushing it. Defeat all incoming rats converging to your position for the next 3 minutes or so.

Go down the stairs once you’ve got the cart pushed by Lucas and you’ll find a new area. There’s a crate in front of you that requires some pushing, but before you do that, start by lighting up the torch on the wall using Extinguish and then use Odoris to force rats into one spot. Use Luminosa to blow all of them up. You can now move the crate without getting devoured.

Go to the light in the basins and go through the hole in the floor. Go through the hole to find an underground area and turn both the lights on here to find symbols. Keep heeding Lucas’s guidance to make your way through. You will have to light two more braziers to reveal the rest of the symbols.

You can now simply leave the underground tunnels and go to the lion’s marble mask. Interact with it and you’ll gain access to Beatrice’s Laboratory.

As you enter into the secret laboratory, Lucas will turn the lights on and you will find the equipment you need in order to rid Hugo of his disease.

Collectible: Curiosity 22- Family Tree can be found here on the right of the room near the vase.

Get to the box next to Lucas and open it up to find a cure for Hugo. Unfortunately, the cure is incomplete, but fortunately, Lucas can complete it quite easily.

It can’t be that easy, however. The room is suddenly flooded by rats and so you will have to fight back. Craft Ignifer ammunition and light up the brazier nearby.

Find the Macerate in the Pharmacopeia

To identify the correct ingredient, you will have to smell each of the pots before you finally find the right one.

Now simply head back to Lucas with the ingredient. Be careful as rats will stop your way and you will have to use the Ignifer to clear your way.

Continue to protect Lucas while he attempts to finish the cure by taking out all of the rats using the Ignifer ammunition you recently crafted.

Clear a Path to the Stills for Lucas

Once Lucas has finally reached the remedy, simply use the Ignifer to protect yourselves from the rats.

Bring Lucas Back to the Central Alcove

You will now have to bring Lucas to the central alcove. Lucas will manage to get to the next spot past the rats to complete the elixir.

Kill all of the remaining rats and get Lucas to a safe point. Lucas will finally be able to finish the remedy and the rats will stop. Turns out the elixir prevents the rats from attacking the two.

Hugo can now be instilled with the cure, which will help with the symptoms.

This finishes our walkthrough of Chapter 12, All that Remains, of A Plague Tale: Innocence.