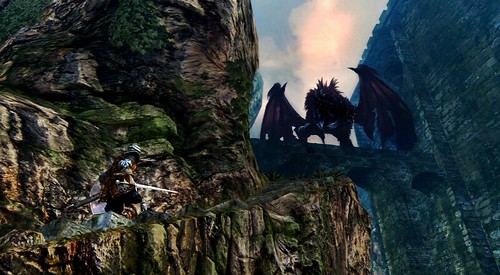 Dark Souls creates the parallel worlds all around you filled with human players who are playing at the same time as you are, and it does so automatically when you are logged in Xbox Live or PSN. If you wish not to be disturbed, don’t log in.

You can engage with these human players in several ways; you can help them, join them or attack them. Dark Souls offers a unique PVP contest if you get bored with your regular questing and boss fighting.

You will encounter these human players in the form of Souls that wander around as they attempt to complete their own quest. Those who fall, leave behind their blood stains. You can click these stains to watch the last few moments of the fallen Soul.

How To Interact With Souls in Dark Souls

Before you are able to leave messages for other souls wandering in your World, you will have to buy Orange Soapstone that allows you to leave a message for other players. You only need one and use it when you can, since it isn’t consumed when used.

Once you have this item, you can send from the available list of dialogue choices. Yes, you can’t customize your message.

This feature a new dynamic to the gameplay, you can even lie but do remember; your messages can be rated by other players and messages with higher ratings will reward you with bonuses, and instant heal. Telling the truth has its own benefits but that doesn’t you can’t lie once in a while just for fun.

How To Join With Other Players

As long as you stay within the range of that Soapstone and away from Bonfire, you can be summoned by other players. You can do this in both Human and Hollow forms, but if you want to summon other players, you must be in Human form.

To summon other players, first locate the player’s Soapstone and the summon them into your World. When you are hosted, you can summon two more to make it a team of four.

You can ask help from these players to help you defeat the bosses or other giant enemies as a team. Your team members can help you complete challenging areas. While you get to complete the challenging task, they are rewarded with bonus Souls and Humanity for helping you out.

Be careful though, if you are a host, and you die; you will become a hollow, and all your team members will be kicked out of your World.

How To Communicate With Your Team

There is no direct way to communicate with other players in Dark Souls that join you in your fight with a powerful boss or to help you completing a challenging area/task.

You only have access to gestures that can help you get your point across. Talk to various NPCs in Dark Souls and they will teach you gestures to help you interact with other players.

These are the organizations that are scattered throughout the World of Dark Souls. Each grants its members some benefits and strengths, so if you want to join any of these, choose wisely, as once you are in, you will have to abide by their rules or it will cost you a lot.

If you end up wanting to leave a covenant, go to the top of the Undead Parish Bell Tower and talk to the Black Garbed NPC there. You can leave any covenant for free with his help though, you may end up paying thousands of Souls to remove any sins that you may have committed.

Way of White
You get into this Covenant by communicating with the body guards of Gwyn when you have a lot of Humanity. If you like to help out other players online, join this covenant. Members of Way of White can do Miracle Resonance easier. It also reduces certain invasions from other Covenants.

Princess’s Guard
You can join this Covenant by siding with Gwyn’s daughter, Gwynevere. She will ask you for a favor after you have defeated Ornstein/Smough. She gives you Lordvessel, an item that will allow you to warp between bonfires.

All you need to do is kill her father and get his soul flame. Joining this covenant will grant you 1 flask at anytime in the game, maximum you can get are 20.

You will get to join this covenant late in the game, it allows you to get the Dark Knight Armor. The Blade of the Darkmoon’s primary goal is to assassinate other players who have broken their covenant by using a list of names found in the ‘Book of Guilty’.

They hunt down the players who deserted their covenants, but do encourage others to join them. If you have left any other covenant and Blade of the Darkmoon is becoming a pain in the butt, then join them and start hunting yourself.

How to Join Blade of the Darkmoon

You will receive a Blue Eye Orb and Blade of the Darkmoon, that you can use to invade other players.

Warrior of Sunlight
You need 50 Faith to join this Covenant. You will receive ‘Lightening Spear’ miracle when you join this covenant. This miracle requires 20 faith and scales with faith stat.

Warrior of Sunlight takes Sunlight Medals as pledges and you get items for your medals. In order to rank up in covenant, you will need to offer a lot of medals at different intervals of the game.

How to Join Warrior of Sunlight

Forest Hunter
Talk to huge cat ‘Alvina’ in the dark forest. You will find her in a small stone building towards the Wolf boss. Alvina will give you a white pearl when you join this covenant, which she can use to summon you with other players who are not part of covenant, for the journey into the first part of the forest.

The sole purpose of the existence of this covenant is to make the walk to the giant wolf extremely difficult towards the end. When you kill enemy players results in rewards. You will find out that Alvina hates the Wolf that guards the large sword and she wants you to kill him.

If you don’t, it will result in the breaking of covenant and more importantly, your name will appear in the book of guilty for the members of ‘Blade of the Darkmoon’.

However, if you let go the Wolf, you will get a powerful sword. If you attempt to kill Alvina, it will also break the covenant. Though, if you are loyal to Alvina, she will reward you with a ring that can make you transparent to a certain degree, making you harder to detect in dark places.

How To Join Forest Hunter

Darkwraith
It’s a secret covenant. You join it by talking to ‘Absolute Darkness’ that wishes to engulf this World. You will be rewarded with Dark Hand shield and weapon for your services to the covenant.

It helps you steal humanity from other players and as you do, you rank up in this covenant. Steal +10 humanity and you get a Red Eye Orb. Get 30 and you get Dark Sword and Dark Armor.

How To Join Darkwraith Covenant

Now you can take two paths both leading to joining this covenant:

Once you have defeated the Four Kings, a serpent will appear just after the bonfire. Talk to him and he will let you join the covenant.

Path of the Dragon
You can join this covenant by swearing allegiance to Seath. These guys invade people with items called Dragon Scales to retrieve Dragon Scales.

You steal Humanity/Souls/Dragon Scales and offer them to your covenant to rank. With each rank, you become more dragonoid eventually gaining the ability to breath fire.

How To Join Path of the Dragon

Gravelord Servant
Go to the room with Titanite Demon in the Crypts. There is an empty coffin here, look at it and it will prompt you to enter. Enter and sit there for a moment.

A cut scene will start. When you enter a large room, go to the larger coffin at the other side. Create your covenant with the Gravelord Nito and receive your Sword and Spell.

Chaos Servant
Like Witches ? join this covenant. Proceed deep into the sewers and you will arrive at the chaos area, just after the swamp. Take an out with Witch, and you will gain powerful fire spells for Pyromancer.

You will get a large lava bomb and a random firestorm. Hit the Witch or kill a daughter of the chaos if you want to break the covenant.

How To Join Chaos Servant

Find the Cracked Red Eye Orbs and when you do, you can use them to invade other players and engage in PVP combat. You can steal soul and humanity by killing other Dark Souls players and in a more cynical way half their progress.

You will either have to invade a World or waste the Red Eye Orbs that you found, because they are consumed even when you don’t attack any World.

Or you can attack the host when he is already busy fighting a strong enemy. It will distract the team and it will be very difficult for them to defend themselves.

Most of the times, you will find the host with the team heading to fight a boss, so you know where you need to look for them when you spawn.

Few fragile hearted hosts may leave the fight by choosing to enter the boss door by reaching out the white light so sometimes you may not find anything when you invade a World.

Remember, everything you do in Dark Souls come with consequences. Killing other players in PVP doesn’t go unnoticed, it can lead to the wraith of the Darkmoon.

Or your victims can buy Books of the Guilty from the Undead Parish and add your name to the hit list, which will make things worse as now you will have Black Knight/Darkwraith on your trail, attacking you when they get the chance.

For more help on Dark Souls, read our Weapons and Reinforcements, Magic and Items Guide.