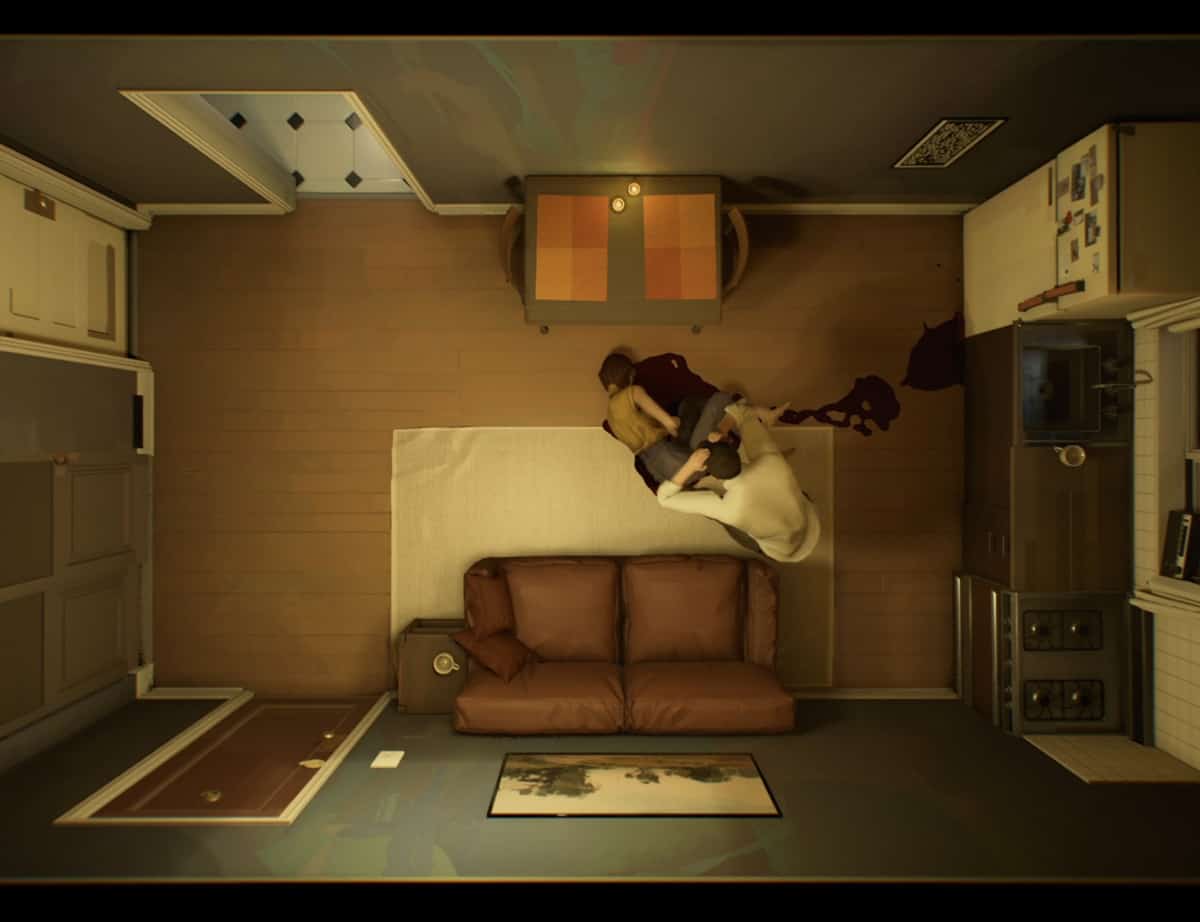 In this 12 Minutes walkthrough, we’ll explain how to solve the puzzle and how each of your decisions plays out during all the time loops. Other than that, we’ll also explain how to unlock all the achievements and endings in 12 Minutes.

Your journey towards solving a murder mystery begins by figuring out how to unlock the door to your apartment.

The key is located inside the plant pot near the door, pick it up and use it to enter your apartment. This won’t be the last time you’re entering through that door.

Every time you die or leave the apartment, or the clock strikes 12 minutes, you’ll find yourself at the entrance again as the time loop resets in 12 Minutes.

In this first loop, you’ll get to meet your wife and have a candlelight dinner while she tells you that she’s pregnant.

Your dialogue choices won’t be of any significance here. After dinner, you’ll find yourself dancing with your wife, but not for long.

Things will pace up as a police officer bombards in and puts handcuffs on both of you. The police officer will then strangle you to death, making the loop repeat itself.

In the second loop, you get to tell your wife that you’re living the same day over and over again. You’ll get to leave the apartment after that, only to find yourself in yet another loop.

Hide in the Closet

When the third loop begins, try something new and try hiding in the closet when the police show up so that he doesn’t get to kill you.

Your wife’s phone is also located inside the closet, you’ll find it when you hover your mouse across the screen. Collect it, it’ll be useful later on.

During this loop, you’ll know about the location of the precious watch that is being the problem since loop 1.

The police will kill your wife on the way out. There’s no point in continuing further without your significant other.

Exit the apartment to enter the fourth loop.

After hearing about the dessert three times already, you’ll finally get to know the story behind the mysterious watch.

Without any further ado, head straight into the bathroom after the initial conversation with your wife to locate the watch.

Ask her about her past, and then show her the watch. This will get her to open up and you’ll finally know what the trouble is all about.

While explaining everything, she’ll point you to a polaroid image on the fridge. This too will be useful later on.

Soon enough, the police will break-in. Attack the police with the knife you collected from the medicine cabinet.

The police officer is stronger than you think and the fight will end up with you being knocked out. Time to hear about the dessert again! However, one thing’s for sure is that you cannot kill the police officer and you have to settle the problem through dialogue only.

When your evening restarts, head straight to the bathroom and grab all the items that you collected in the last loop. However, this time collect the pills too.

Add the pills to the glass of water and go give it to your wife. The wife will then leave you and enter the bedroom to have a nap.

Follow her and try turning on the lights, you’ll know that the light switch is faulty. This light switch will later dig the police officer’s grave for him.

Next, hide in the closet and wait till the police officer enters the apartment. He’ll head into the bedroom straight away and turn on the lights.

The faulty light switch will leave him unconscious for the time being. Handcuff him and wait for him to gain consciousness.

When he’s back in his senses, play safe. Tell him that you’re innocent and hand over the watch to him when he asks. Before he wakes up, make sure you’ve handcuffed him. You’ll find the handcuffs in his inventory.

For all the future dialogue choices, opt for whatever he asks you to do. He’ll kill your wife eventually, but spare you your life.

This will unlock the Coward achievement. You can leave the apartment, or flick the faulty light switch to restart the evening.

For this loop, carry out everything the same as that of the earlier loop. Put your wife to sleep and wait for the police officer to show up.

When he does, he’ll fall victim to the faulty light switch again. Handcuff him, and this time interrogate him instead of giving your wife away.

Also, look for his phone. In his phone, you’ll find his daughter’s contact number and it will come in handy during the later loops. During this loop, you’ll find out about his side of the story. You’ll know why he is after the watch and your wife.

You’ll also have to shoot him during the conversation to get him to open up. He’ll eventually fall to his wounds and the loop will restart.

While confronting the police officer in one of the previous loops, you’ll know how the cop got to know of your wife.

That reason happens to be your wife selling the watch to one of the pawnshops.

You can ask her about her side of the story as to why she decided to sell the watch and she’ll leave the apartment.

Leave the apartment after her to restart the loop.

There’s a way out where there’s no violence and no one gets killed. This is where the cop’s daughter comes in.

Head to the bathroom when you come in and make a call to the cop’s daughter.

You’ll find her in your contact list under the name of Bumblebee. Call her and tell her about her father’s intentions towards your wife.

After the call, grab the watch and go out to have a conversation with your wife. Keep the conversation going until the cop shows up.

Keep your dialogue choices restricted to her past. When the cop shows up, your wife will continue the conversation with him.

She’ll show here the photograph from the refrigerator as proof that she didn’t kill her father. The cop will leave after collecting the watch from you.

Of all the loops, things are going to take a major turn in this one. Put your wife to sleep again using the pills and water in the bathroom. Then, wait in the closet for the cop to show up.

Before that, grab the present from the bedroom drawer. When the cop falls for the faulty light switch again tell him that it was your wife’s brother who committed the murder.

Later on, ask him about the nanny with whom your wife’s father had an affair. When he fails to recall her name, show him the gift.

Your mother’s name is on the gift, and you’ll soon come to realize that the nanny was your mother. A cutscene would follow and then the next loop would follow.

Now that you know of the ugly truth, head straight to the bathroom when you enter the apartment and call Bumblebee.

Let her know that her dad is after your wife’s watch for her treatment. Then head out, have a pleasant dinner with your wife before continuing with the dance.

Do not talk anything about the cop, her past, the day repeating itself, or the watch. If you play your cards right, you’ll be led into the bedroom.

This loop will unlock the Groundhog achievement.

During this loop, tell your wife that you killed her father. Then you call Bumblebee and tell her the same.

The cop will then show up, tell him the truth as well and he’ll ask for the watch. Hand over the watch to him and he’ll leave.

However, he won’t be the only one leaving the apartment tonight. Leave the apartment once your wife asks you to do so. This would unlock the Confessed achievement.

Head into the bathroom and collect the watch. A cutscene would follow where you’ll have to make one final decision.

Choose to leave your wife to unlock the Alone achievement.

Enter the apartment for the last time only to see it empty. Get the watch from its usual location, flush it down the toilet and leave the apartment.

This time, you won’t be entering the apartment again. But, guess who made the dessert?