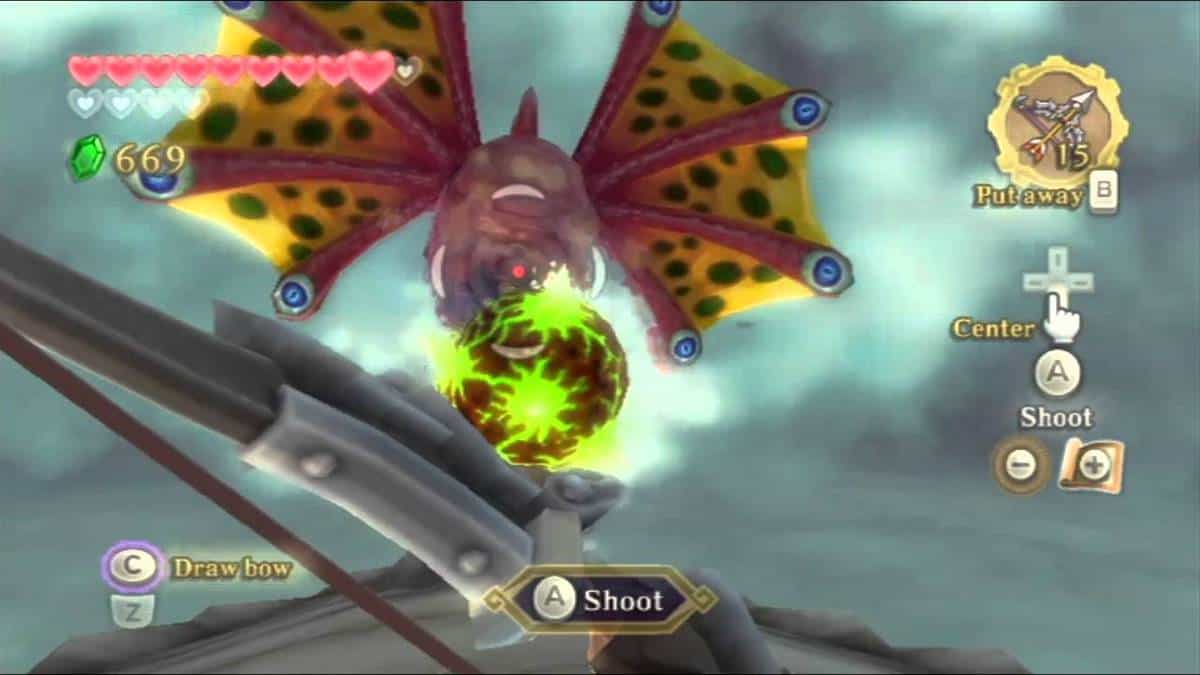 There is a large variety of enemies in Skyward Sword, ranging from a weak Remlit to a big fat ass boss. Each of these enemies has a peculiar way to attack and interact. You can’t deal with all of them using the same strategy. If you know their weakness, you can manipulate it to fight the threat before it can cause any harm. Below we have all the Zelda Skyward Sword Enemies listed down along with tips on how to defeat them.

The purpose of the following guide is to introduce you to the enemies you are going to face in the game and discuss different strategies you can use against them. Some are weak while others are relatively harder to defeat.

For more help on Skyward Sword, read our Walkthrough, Boss Strategy Guide, and Side Quests guide.

Location: Lanayru Desert and Mining Facility.
Ampilus is a new enemy in Zelda series. Looks more or less like a snail and will attack by rolling along the floor. Its electric charge can do the damage so you should avoid the contact. You can attack it when it stops rolling.

They eat on their enemy to get bigger and stronger. You will encounter them in Lanayru Mining Facility and can be dealt with Gust Bellows.

They are the archers who will usually attack you from the higher positions. If they are out of your sword’s range, you can use your bow or throw bombs at them.

Location: Lanayru Mining Facility and Sandship.
They can be found in Lanaryu Mining Facility. They aren’t hard to kill but their death is followed by an explosion damaging anything in range. So when you are fighting with them, maintain a safe distance.

You should use Gust Bellows to expose their two gems which then can be slashed and stabbed.

Beamos have a stacked body made of different sections. At the top is a single eyed head which fires a beam on target in sight. You should hit the sections separated by blue lines to bring its head to the ground.

You can then strike the final blow to finish it off. You can block the beam attacks by using your shield.

Unlike Archer Bokoblins, this group can use different weapons like cleavers, club and bows. You can inflict damage only when they are not using the defensive posture.

Some of them even can summon other Bokoblins. In that case, you should target the ring leader to stop the chain. You can also throw bombs at the Bokoblins occupying the watch towers.

Location: Eldin Volcano Summit and Fire Sanctuary
These giant creatures carry a big spear and a shield in their hands. The shield is wooden so you can nullify its defense in no time. Swing your sword then to bring them down. .It is also prone to bow attacks. But you should watch out for their occasional spear strikes.

Location: Waterfall Cave, Skyloft (Night time only), Ancient Cistern, Eldin Volcano and Earth Temple.
These sticky creatures have the ability to rejoin if you slice them into pieces. They will trap you if you get too close to them. You can brake free by shaking your Wii remote.

You need to slice is fast enough that it does not have a chance to reassemble again or grow into separate Chuchus.

Location: Ancient Cistern
They are like zombie variants of original Bokoblins. They will rush at you fast and try to grasp you. You should stay sharp and swing your sword to rip them apart. When they attack you in groups, you should not stay stationary or there is a good chance of being surrounded.

One easy thing Cranoics have is that they turn red when they are about to attack like some fish in water. You can dodge them and use any of your attacks to eliminate them.

They are dangerous than the regular ones. You should watch out for their projectiles and repel them. Stick to ranged attacks if you can’t get near them.

They are the carnivorous plants ready to eat up your flesh. Good thing is that they are stationary so you can deal with them from distance. Don’t get close to them or you will regret. You can harm it when it open its jaws either horizontally or vertically.

These creatures live in lava and will spit the burning fluid at you. You can block it with your shield but the wooden shield will take some damage or will be destroyed by its attacks.

Slingshot or bows can be effective weapons to deal with these enemies.

They are fast and they can fly so targeting them won’t be easy. You can try to catch them with your whip so that you can get close to them for some sword hits.

Guays are the crows flying in the sky. They won’t attack you normally but when your back is turned, they will come down and attack you. You can get rid of them using ranged attacks or swing your sword when they come in range.

You should try to dodge the massive boulders the spit at you. Dodging and then attacking (using ranged attacks) can prove to be a safer option.

If you have played Zelda games before then you must have seen this enemy. They are quick and carry a shield for defense. Don’t let their taunting habit to distract you. Attack when you have the opportunity after dodging their moves.

Location: Faron woods, Lanaryu desert, Sky
You can find these enemies both in land and in air. On land they can hide using the green weeds on the head. They attack using the projectiles from the mouth. You can repel these attacks and send them back.

Otherwise, you can also be aggressive if you have the chance to land a couple of hits using your sword.

Pyrups have a single antenna on their head like a unicorn. They hide in holes and walls and can block Link’s passage using the spit material from their mouth. You can defeat them by tossing bombs to the holes they are hiding in which will also clear your path.

They are like the other Toadpolis but unlike their fellows, they emerge from the sand to attack. The area having these creatures should be walked on carefully. You can use bombs to get rid of them.

Location: Lanayru Coast.
They are the pirates of Zelda world and can be found on the coast of Lanayru Desert. They carry electric swords as weapons. You can either go sword fighting or use your ranged attacks.

They won’t attack you directly rather let other guards know about your presence. So you should stay away from the green light they caste.

Since you go in Silent Realm without any weapons, you can’t defeat these guardians. They appear when you fail to collect the tear in 90 seconds time. Or the Sentry Sentinels can tell them about your presence. So the only way to survive is either run or hide at some place. Or the tear can solve the problem.

These spiders are clever as well as quite resistant in their normal posture. But if you manage to flip them over, you can hit the purple weak spot to kill them.

They will shoot spider webs to trap you so make sure that you repel the attacks in time. While Skulltula is hanging from its web,you should use a horizontal strike first to spin it then a couple of thrusts on its weak point will do the trick.

They are the snakes with multiple heads. They have a regenerative ability and that’s why each time you slash a head or two, they will regenerate through the third one left behind. So to get rid of it completely, you need to attack it fast enough so that all of its heads are removed before they can regenerate.

You can either dodge or block the charged attacks of this enemy.

They have the ability to use double weapons at a time. They are good at defense too so expect some tough battles with them. You can use your shield bash to make an opening for attack. Stay defensive and when you get the opportunity, utilize it do the damage.

Stalmaster is an upgraded version of Staflos. He has four arms and carries four blades. You will have to pinpoint your attacks to do the damage otherwise, he will block most of the attacks.

They own the electric swords and armor. You will have to be precise with your sword if you don’t want to get punished on counter. Find the weak spot and target it to get rid of these tech variants of Bokoblin race.

Walltula
Location: Skyview Temple and On the Great Tree.

They don’t present any problem as long as you don’t ignore them. You can use your ranged weapons like the bow or the Slingshot to remove them effectively.

Location: Lanayru Mine, Lanayru Desert, Lanayru Mining Facility, Lanayru Sand Sea, Sandship
They hide themselves in the sand and come out to attacks when prey is nearby. You can’t slash them with your sword because of the electric field. You will have to use the ranged attacks like bombs will do well to get rid of them