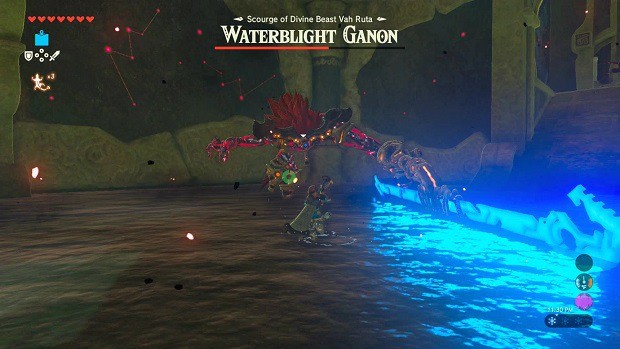 In our The Legend of Zelda: Breath of the Wild Waterblight Ganon Boss Battle Guide, we’ve detailed everything you need to know about finding and defeating the Waterblight Ganon in the Divine Beast Vah Ruta dungeon.

For more help on The Legend of Zelda: Breath of the Wild, check out our True Ending Guide, Fireblight Ganon Guide, and Stone Talus Boss Guide.

To start this boss fight, you will need to activate all the 5 terminals present in the Vah Ruta Dungeon. After that is done, head to the main control unit in the room to begin the fight.

This boss battle is divided into two phases. However, both the phases are comparatively easier as compared to Fireblight Ganon boss battle.

The entire boss fight revolves around getting in close to land 1-2 attacks before dodging away.

First Phase
During the first phase, always be prepared to dodge the spear attack. Once done, try to get near him to land 1-2 attacks. This should force the boss to teleport away. It’s important that you keep track of his movement and avoid getting surprised.

In one of his attacks, he will use a mid-range stab by raising his right arm and attacking with the left. Move out of its way to escape the damage. He is also able to throw his spear towards you. Strafe sideways to avoid taking damage.

After each of his attacks, he will be prone to taking damage. Use this opportunity to deal him damage.

Second Phase
Once down to about 50% HP, the second phase will begin. During this phase, you must make use of the Cryonis Rune in order to create icy pillars and give yourself some more area to work with. You basically want to the on the move most of the times.

It’s also important to note that Waterblight Ganon is weak against Shock Arrows so make sure to stock them. Use them if you can otherwise try to look for openings and you should be good