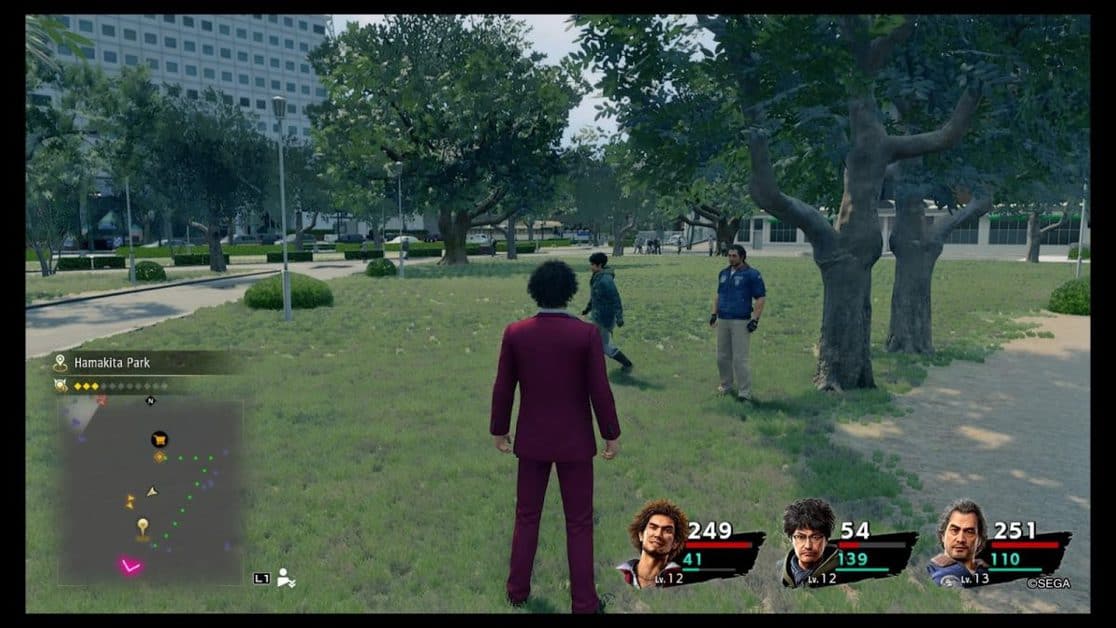 You will meet Nanoha’s twin sister Saeko, who will tell you about the store manager that died right after calling her sister.

Nanoha can confirm that his death was not a suicide, but the police ruled it as one.

She suspects that Mabuchi, the head of the Chinese Mafia, is paying the police to keep this case silent.

Saeko will now join your party to settle this case for once.

The Movie Theatre
Head towards the movie theatre where your first fight of this chapter takes place.

Take out the enemies and head towards the next marker. There will be thugs bullying a guy in a suit.

Defeat the thugs and then the guy with a mask. This will unlock the Job Quest.

When in control, talk with the three thugs shown on the map. This will put you in a fight.

Follow the bald guy when the fight is over. Interact with the door to trigger a cutscene. Saeko will now leave your party.

Now head towards the next marker. This is where you can create weapons, strengthen them, or make new accessories.

You can also donate money to unlock more items.

The Phonecall
As soon as you exit, you will receive a phone call from Saeko to come back to the hostess club.

In the morning, go towards the next marker. You will meet Ririka, who will tell you about the Job Change mechanic.

Make your way towards the next marker. Interact with the machine to progress further. This will trigger a cutscene. Go back to Otohime Land.

The Next Day
In the morning, Bleach Japan will be rioting outside the place. You’ll have to fight them in order to progress further.

Now interact with the lady after beating the rioters when in control. You will now be managing her company on the second floor of the rice cracker shop.

Ichiban will help her business by hooking her up with Nock Ogata. Talk to her again to rearrange the team members.

Swap out the two members with the grandmother and a chicken.

The Showdown
Now exit to progress further in the story. Before making your way towards the next marker, restock your items and save the game.

Interact with the machine and choose the first option.

There will be two fight scenes after the cutscene. The enemies will be level 17 and will take some time to defeat.

Make sure to keep your health at maximum. You will be facing the warehouse manager in the second fight. He will be vulnerable to fire.

After the fight, a cutscene will be played where the warehouse will explode.

This will be the end of Chapter 5 for Yakuza: Like a Dragon. You will be now taken to the Save menu of the game.