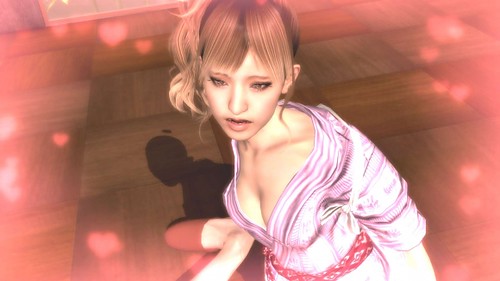 This time players won’t be limited to controlling Kazama, instead there are four characters that are the integral part of the story and gameplay. As mentioned before, our old pal Kazuma Kiryu is still there and the other three characters are Shun Akiyama, a despicable entrepreneur, the prison escapee and dangerous assassin Taiga Saejima, and the not-so-well-esteemed cop Masayoshi Tanimura. Their individual stories are intertwined and combine to make a large plot.

If you played the prequel, then Kamurocho will definitely ring a bell or two. It’s the same red-light district which is over-mauled by mobs and perverted nightclubs. Our yakuza chief Kiryu is back in this hell-hole, and he’s been caught up in some supposedly small mob clashes. The minuteness of these clashes is a misinterpretation, and their real scale leads to some serious business.

Thankfully, as stated above you won’t be confined to controlling only the cheesy but stylish Kiryu. Each character’s story will be played separately, but switching between characters won’t be according to your will. This is done to make sure that a particular incident, which is common to all four characters, can be viewed from various angles to get a better feel of the contribution each character has in the overall plot.

Folks who know a thing or two about Japanese celebrities will be interested in the fact that the main characters have their face modeled in 3D through Cyberware’s 3D scanner after their original actors. The voice casting is also done by the same celebrities. Among more noticeable are:

Mix sand-box with JRPG and you get the gameplay of Yakuza 4. The game is open-world like a sand-box, and interactions with players and the fighting style is sort of JRPG. Additionally there are dozens of side quests, bars to get drunk in, woman to seduce, it’s deep and entertaining.

The idea is pretty much the same. Run around here and there, find those pink markers to select missions, and if anyone seemingly hostile comes in front you, just whack him till he learns whose boss.

Shoving fists in your enemy’s face is an integral part of the game; it’s filled with fluent action. You can attack with multiple buttons in multiple ways, grapple and also take defensive stances. There are some neat tricks such as finishing moves, which can be cool ways of finishing off enemies. There is also a heat system, which basically shows the ‘rage’ of you character. Beat those bad boys up more and the meter fills up, and your player starts to glow a shiny red, giving a massive boost in the power of hits and allowing the use of even more moves. 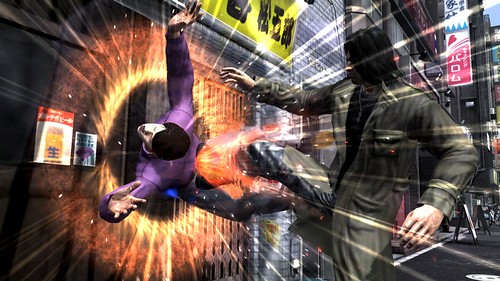 Adding to the variety are the different combat styles each playable character has. The basics pretty much remain the same, but you get one of two unique extra features for each character, making combat with each one a slightly unique experience. 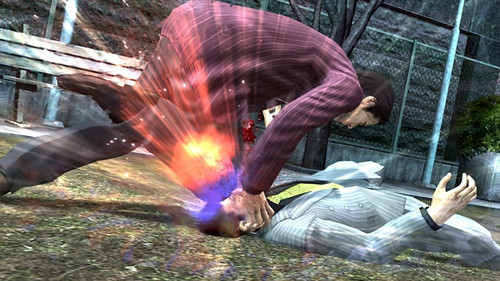 Shun’s primary fighting style relies on kicks, though he can grapple and shove enemies here and there. It’s quite entertaining to shove the guy’s feet in the enemies’ faces. Masayoshi likes to keep a spear with himself, and skewering enemies with it is fun and satisfying. What’s important to add here is that all characters can take the enemies’ weapons, such as base-ball bats and stuff, and use them for melee purposes. Taiga is big, and he seems to like that fact.

The guy’s fighting style resembles that of a wrestler; his primary focus is to grapple and throw enemies hard on the ground. The last guy is our old hero Kazuma, and he still keeps a good balance between power and speed, using a bit of both to do some cool, fulfilling finish-offs.

What the North American and European version of Yakuza 3 lacked, that was included in the Japanese version, were the women you could date and romance. Sega just didn’t understand the demand in just about every form of entertainment. Well, fear no more, because Sega isn’t excluding anything in the western release, particularly not the sexy stuff.

So now you can just walk into a bar, spot a hot girl and go on to have a chat with her. Then it’s just about saying the right things during the conversation, and voila! She’ll be letting off hearts. Now you just have to pamper her a wee bit and then – well, you know what happens next. You can even spend time cultivating your own hostess of sorts, a girl who sits and talks with patrons and occasionally serves drinks in night clubs, and whom you can dress from head to toe to your liking (*wink*).

If you’re married or just don’t like that sort of attention, there are plenty of other stress-relief activities available in the game, such as going for golfing, fishing, gambling your money away playing Pachinko, and other similar mini-games that let you take a break from all the kicking and punching.

For those of you who don’t like subtitles, you’ll be disappointed to learn that the game’s voice acting is in Japanese, even for the NA and EU releases. Personally, we think that’s a good thing, since the whole setup is Japanese, with a Japanese culture and characters with difficult yet cool Japanese names, so English dubbing would’ve just seemed silly.

Graphics of Yakuza 4 have certainly been improved when compared to its prequel. The most noticeable improvement is the quality of the character’s faces. We mentioned something about using Cyberware’s 3D scanner for modeling some of the main characters from the real-life celebrities. Quite honestly it has worked out well for most of them. The faces contain subtle details that aren’t usually seen in most games such as dynamic wrinkles and facial lines.

Aside from the faces of the characters there are improvements to the general environment of Kazama. The buildings and stores are built better and there is a definite improvement in the lighting effects. Lighting is especially valid during rain, as the neon signs start to glow in the reduced depth of field. 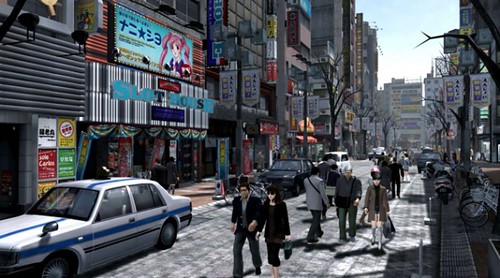 The rooftops, underground parking areas are well-detailed and give an extra bit of sense of freedom to the mix. The skyscrapers on the horizon really give a cool metropolis look to the world. All in all the graphics seemed to have been pumped up nice and good, and look better than most sand-box type games.

Overall the game looks very promising. We’re looking forward to the release of this criminal-based action adventure. Till then we’ll probably set off to learn some Japanese, you might want to do the same.