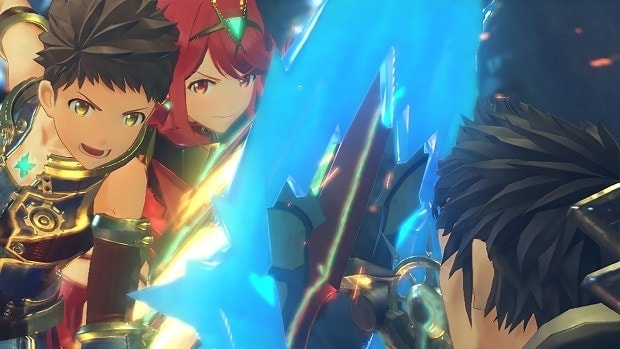 The following Xenoblade Chronicles 2 Mechanics Guide will guide you through various mechanics in the game. These gameplay mechanics are unique and are introduced to you gradually at the start of the game.

You will encounter the following mechanics in Xenoblade Chronicles 2:

You can strengthen or weaken your Affinity during battles depending on the situation. This is dependent on the distance from your Blade. Remaining physically close to the Blade will increase your Affinity and make you stronger as you land attacks as quickly as possible.

Increasing the physical distance between yourself and your Blade will decrease your Affinity, which will make your driver weak. This is something you do not want during battles. Keep the distance low to strengthen your driver.

Specials are advanced moves you can perform during battles for increased damage and ability boosts. Some of these specials will boost one or more abilities giving you an edge during battles.

These specials can be charged to three levels of power, and you can charge them quickly by performing Blade Arts at the right time.

Watch for the on-screen prompts and time, then right to charge your specials quickly. You can also activate damage multipliers by timing them right.

After activating a special, you can perform another before the first one stops as they give you a small window. This will create a Blade Combo and deal a large amount of damage to the enemy.

Using a blade builds trust between the driver and the Blade. The more a driver uses a blade and completes tasks and quests, the more trust is built between them.

During battles, if you manage to achieve maximum Affinity, this will increase the trust-building speed. When the trust level reaches the maximum, the Affinity Bonds will start shining in Golden Color.

As you complete different quests and help the residents in solving their problems, you will start earning Dev points. Keep completing quests to earn more Dev points.

Each Blade in Xenoblade Chronicles 2 has a specific role that cannot be changed. The driver’s role is dependent on Blade’s role. They could be ATK role (Attacker), HRL (Healer), or TNK (Tank).

Tanks are damage absorbers; Attackers will deal damage while Healers will heal Tanks. Switching blades in the middle of the battle can also provide a strategic edge over the enemy.

This will be unique to each Blade, and you can change the driver’s role by changing their Blade. Choosing a blade will also define the fighting class of the driver.

Each class comes with its unique Special Effects. Every Blade has a pre-defined role, and it cannot be changed. However, Poppi is an exception and comes with a special feature, Poppiswap, that allows you to change the role.

Before it is over, perform a Topple effect Blade art to deal massive damage to the enemy. This is called a Driver Combo. It can be extended up to four stages in a battle: Break, Topple, Launch, and Smash.

WP is your weapon points. They measure your skill level with a specific weapon and are required for leveling up Blade Arts.

SP represents your Skill Points. They are used to unlock passive skills and show how good a driver is in the battle.

HP represents your Health Points. If it drops to zero, you will die, so keep an eye on your HP and avoid taking too much damage.

Ether represents the offense and defense capabilities of your driver’s Ether Arts. They could be used to deal with damage or heal yourself. Maintaining high Ether will ensure battle effectiveness.

Agility means how well you can evade enemy attacks. Increasing Agility will give you better attack dodge capabilities.

Combat is an essential aspect of Xenoblade Chronicles 2, so knowing the ins and outs of the game’s combat system will prove extremely helpful.

Firstly, you must know which Blade to equip each character as the weapon wielded by them changes according to the Blade they wield. Blades can be equipped for each character in the pause menu, and the D-Pad can be used to change blades mid-battle.

You can engage in battle by throwing rocks at the enemy or approaching them and auto-attacking by pressing A.

There are health bars for Rex and the enemy to keep track of. There is also a Driver Arts ability bar that is gradually filled, and once filled, you can press X to use an ability.

Using driver attacks fills up the final ability bar, which can be charged up to four levels. You can press A to use it and B as the circle approaches the outer zone.

Blades appear in the bottom left; you can switch between using the D-Pad. Once the gauge around a blade is filled, you can use its Driver Art attacks.

Combos are essential to pile damage on the enemy. A Break sign sometimes appears on the screen.

To continue with the combo, you must first deliver a Driver Art Attack, which topples the opponent, then use one that launches him, and finish off with one that smashes the enemy.

Info regarding Driver Attacks can be seen by hovering over their icons, so find the one that can ‘topple’ the opponent. Mastering these combos is difficult but an important skill to have

Fill the party gauge bar at the top left of the screen and press +. This will allow you to perform a party chain attack where all the party members take turns attacking.

While performing this attack, you must select the Blade of the opposite type of the element you see hovering above the enemy. This will help inflict huge damage that can decide the battle’s outcome.

Enemies have weaknesses to certain element types indicated on the right of their health bar. Having a ranger of blades in Rex’s arsenal is an excellent strategy in battle, as you can equip blades according to the enemy’s weaknesses.