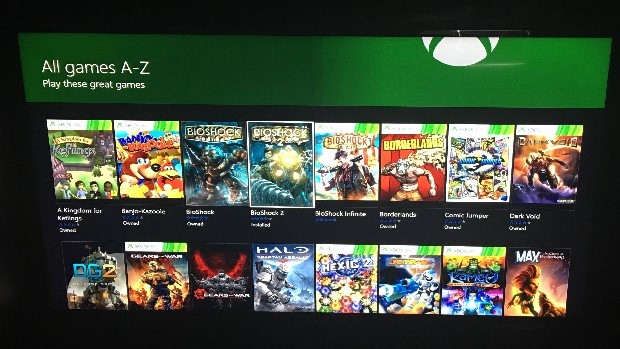 More Xbox Game Pass titles have been revealed thanks to a user on Reddit who shared a new screenshot from the Alpha version of the program.

Currently available to Xbox Insiders as an Alpha preview, the picture shared by Dibella360 reveals that four new games have been added to the list of Xbox Game Pass titles since Microsoft last shared information regarding the games on the service.

Also See: Xbox Game Pass Has Been In Development For Two Years

The new games, which will be joining the likes of Halo 5 and Gears of War Ultimate Edition, are the Bioshock games and Borderlands.

The first two parts of the Bioshock trilogy will be the remastered Xbox One versions while Bioshock Infinite will be the Xbox 360 version.

The original Borderlands game included in the subscription service will also be a backwards compatible Xbox 360 title.

Microsoft has been promoting Xbox Game Pass as a subscription service separate to Xbox Live Gold which will grant people access to over 100 games a month at a cost of $10. New games will be added while some old ones will be removed at the end of every month similar to Netflix.

While the full list of the 100 games available at launch hasn’t been revealed yet, Microsoft has confirmed some of the games and publishers which will be part of this brand new service.

Unfortunately, despite attempting to bridge gaps between Xbox One and PC, the Xbox Game Pass will not be available on PC, at least not at launch.

It is possible that Microsoft might announce a PC specific similar feature as well just as EA launched Origin Access after seeing the success of EA Access on Xbox One.

While PS4 does have a similar subscription service in the form of PS Now, one major feature that sets apart both Xbox Game Pass titles and PS Now is the ability to download games on the Xbox platform instead of having to rely on streaming.