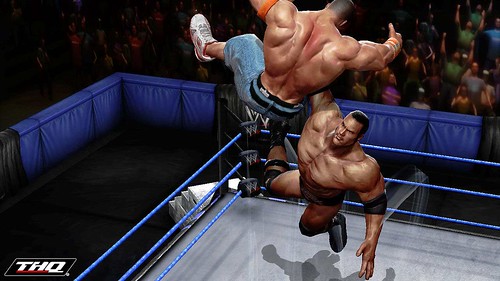 THQ for the first time has combined the two generation of superstars in one roster so to provide an opportunity to fans to experience the adrenaline pumping action featuring the best in the business.

It’s the charm of WWE Superstars against the legacy of legends. All superstars are equipped with their signature moves and finishers along with unique abilities. Lets have a look at each character included in the WWE All Stars Roster.

All the legends featured in WWE All Stars with a brief background history.
Andre the Giant
Andre the Giant is the athlete who beat Hulk Hogan for the WWE championship in 1988. He has been featured in other wrestling games too and is known for his devastating attacks executed by his giant body. With his powerful punches and giant boot, you can kick opponent out of the ring.

Hulk Hogan
This WWE hall of Famer is well known for his resistance as it will take more than usual to knock him down. His trademark move is “Legdrop”.

Bret Hart
He is also Hall of Famer. He (Famous for Excellence of Execution) is one of the best Grapplers in the sporting history. His famous finisher, “Sharpshooter” can be performed on both standing and grounded opponents.

Macho Man (Randy Savage)
Macho Man is an all rounder recognized for his old school moves. He is a well decorated superstar and can surprise the opponent at any time of the match. His finishing move is “Flying Elbow Drop”.

Ricky Steamboat
He is known as one of the most competitive athletes of all time. His martial art skills and agility are useful. He is also good at aerial attacks so you have variety of moves to execute. His trademark move is “Flying Cross-body Block”.

The Rock
He is famous for his typical attitude. This third generation superstar is good at charged attacks and grappling techniques. He can be a difficult competitor to defeat. His finishers are the “Rock Bottom” and “People’s Elbow”

Mr. Perfect
Curt Hening also known as Mr. Perfect is a WWE hall of famer. He is considered as one of the greatest international champions of all time. His trademark moves are Pefect-Plex and Perfectio.

Stone Cold Steve Austin
He is one of the most notorious wrestlers in the WWE history. Also known as the “rattlesnake”, he is always a dangerous competitor in the ring. His famous finishing move is “Stone Cold Stunner”.

Shawn Micheals
He is the showstopper. He has been in many brutal fights in the WWE history. He was one half of DX. His trademark move is “Sweet Chin Music” that can instantly knock out the opponent.

Ultimate Warrior
He is famous for typical color pattern on the face. He was an enthusiastic fighter who used to rush towards the ring instead of walking slowly. He is strong and his finisher, “Torture Rack” can be devastating.

Eddie Guerrero
Although Eddie Guerrero is not among us today but his services for WWE will be remembered. He was funny, a tough athlete and a champion.His finisher is famous as “The Lasso from El Paso”.

Jake the Snake
He was known for his habit of carrying snakes in the ring. He is considered as one of the most aggressive fighters in the WWE history. “DDT” which has been used by many other wrestlers too was his finishing move.

SGT. Slaughter
He is a former US Marine and is well known for his grappling skills. He is quite dangerous with his finishing moves like the “Slaughter-bomb” and Cobra clutch.

Roddy Piper
Roddy’s rivalry with Hogan has been one of the most entertaining segments in wrestling history. He was a good grappler and a competitive athlete. His finishing move was “Sleeperhold”.

Jimmy Snuka
He was a physical and tough athlete. High flying moves over the top rope were his specialty. His finishing move was “Superfly-Splash”.

All the WWE Superstars with a brief background history.

Big Show
He is known as “World’s Largest Athlete”. He is one of three other giants included in “WWE All Stars” roster. His charged punches inflict a lot of damage. His finishers, “Chockslam” and “Knockout Punch” are so quick that opponent usually won’t be able to see them coming.

John Cena
He is one of the hottest super stars of modern age. He is a balanced athlete equally capable of brawling and grappling. He is good at chaining signature moves together which are “Attitude Adjustment” and “STF”

Randy Orton
Known as the “Predator”, Randy Orton is one of the most decorated WWE superstars. His brutal moves like “running punt” can cause some serious damage. His finisher known as the “RKO” is the shortest finisher in the game.

HHH
Tripple H is both a good Gappler and a Brawler. He is versatile giving players multiple options to chain different attacks. His signature move is known as the “Pedigree”.

Kane
This Big Red Monster is difficult competitor to take on. He won’t go down easily and his attacks cause more damage than the usual. Although he is not as big as Andre or Big Show but Kane’s agility is better than the latter 2. “Chokeslam” is his signature move.

Rey Mysterio
He is mysterious, quick and a high flying acrobat. He is not a big athlete but his agility is a big plus point behind all his moves usually chained together for bigger impact. He can perform “619” from anywhere in the ring. His other signature move is “West Coast Pop”

John Morrison
John Morrison is known for his stylish moves appearance. He is the only Acrobat in the game with a signature rope spring maneuver. His other signature move is Starship Pain.

Kofi Kingston
This super star is quick,acrobatic and has a good collection of moves under his belt. He is good at short range punches and kicks. He is also good at using ropes for the cross body take downs. His signature move is “Trouble in Paradise”.

Undertaker
Dead man walking. He has the longest undefeated run in Wrestlemania history. Although Undertaker uses “Chokeslam” as one of his finishers like his brother Kane but “Piledriver” is the sort of move that completes the pin fall for sure.

Sheamus
This 2 times WWE champion has earned a name for himself by defeating superstars like John Cena and HHH. “Brogue Kick” “High Cross” are his finishers.

The Miz
Micheal Mizanin is the reigning WWE champion. He won the championship by attacking Randy Orton while he was vulnerable. “Skull-Crushing Finale” (a sort of facebuster) is his trademark finisher.

Drew McIntyre
He is known as “The Chosen One”. Drew McIntyre has a promising future in WWE.Since his arrival at WWE, he has won Intercontinental and Tag Team championships. His finishing moves are “Future Shock” and “Scot Drop”.

Edge
Known as the “Ultimate Opportunistic”, Edge is the current “World Heavy Weight” Champion. He is good at his finishing move known as “The Spear”.

Jack Swagger
This All American WWE superstar won the WWE championship using his “Money in the Bank” from Chris Jericho. He can make his opponent tap out by his finisher move named “Ankle Lock”

CM Punk
He is the current leader of the “New Nexsus”. His attacks usually are unpredicted and he can chain kicks and punches into variety of combos. Anaconda Vise is his finishing move.