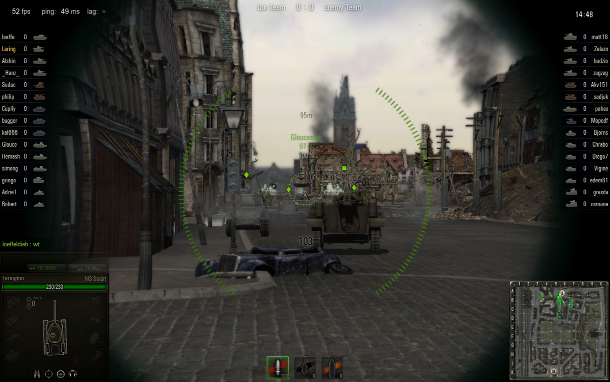 World of Tanks has been in beta on the PC for a while now, pursuing what’s known as a soft launch where you allow the public to play but don’t make a particularly fierce marketing push to raise awareness of the game.

It’s a free to play game and has just gone live, which means every players progress has been reset and free ‘gold’ is no longer being given out on a day to day basis.This is possibly the best time to be jumping into the game as there will be lots of low tech players to face off against.

The concept is fairly simple; two teams of tanks face off against each other employing a mix of light, medium & heavy tanks, complemented by Self Propelled Guns (SPGs, AKA Artillery) and Tank Destroyers (Which have turrets that don’t rotate, but are more accurate at range).

The game provides you with access to Soviet, German & Allied tanks which are bought and researched by each player through an extensive tech tree that allows you to unlock increasingly powerful/effective tanks. I’ve noticed that at the moment the US does not have access to Tank Destroyers despite there being examples of them listed on Wikipedia, these may be added at a later date however.

Note that as this is a free-to-play game, you don’t have to pay any money to get into it but progress will be significantly slower. This actually doesn’t matter, as the light tanks are just as fun to play as the heavier ones! 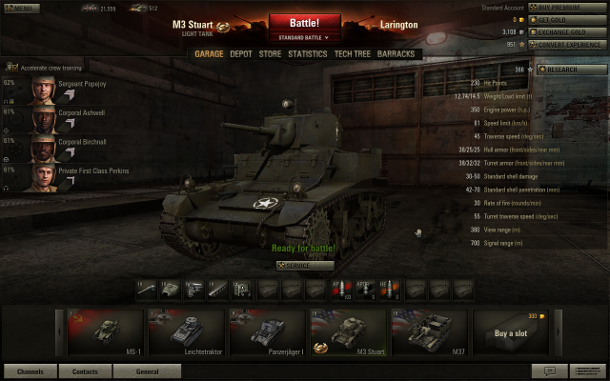 There are two game modes, the first of which is out of combat, where you choose which tanks to buy for your garage, conduct research, check out your combat statistics and plan what research path you might want to follow.

You might also choose to buy and spend ‘gold’ here to get prestige tanks that have lower running costs or buy special gear for your tank that gives you small boosts. Gold can also convert earned experience on a tank into ‘free experience’ that can be spent on any tank even allowing you to zoom up the tech tree without buying each one along the way. 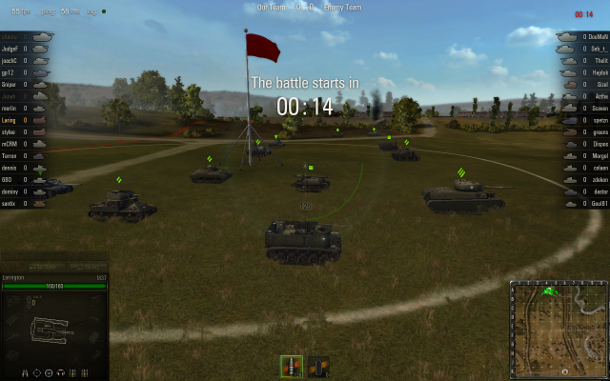 The second game mode is the in-combat one, for each round you will be thrown into a pool of tanks that will then be assigned a battle to fight in one of 16 (!) maps currently available. Combat plays out in a way that feels closer to counter-strike than call of duty/battlefield/etc (but with tanks instead of people). By which I mean, battles are won or lost because of good positioning and tactical thinking rather than rushing forward and trying to overwhelm your opponent with luck and better aiming.

There are, broadly, two kinds of battle – Those with SPGs and those without – and they play differently. Battles without SPGs will often involve straight up charges from either or both sides, preferably as clusters rather than individuals moving forward (only to get picked off one by one). Tank groups will charge into each other exchanging fire back and forwards across the battlefield or one side might choose to sit back and let the enemy charge forward to their doom. 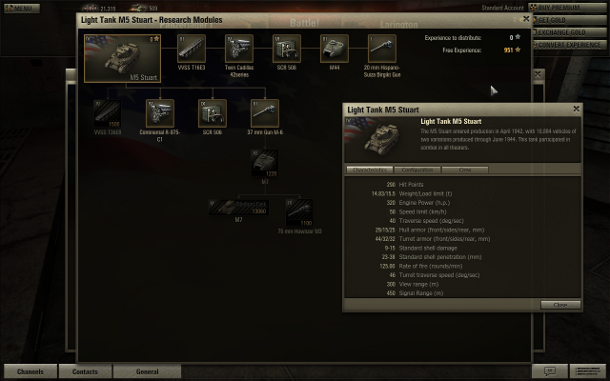 Battles involving SPGs play out differently, where it’s more common to get hit by tanks you can’t even see. Light tanks often play more of a scouting role, or try to break through enemy lines hoping to zoom up to SPGs in order to take them out from the sides or behind. Sometimes these battles can be frustrating, as a single lucky SPG shot might knock one of the tracks off the side of your tank, leaving you helpless against further artillery shells or enemy tanks closing on your position.

Positioning, and as an extension of that good cover, are a vital element of play in World of Tanks. Calculations go on under the hood not just for damage and accuracy but also visibility. Sitting still in bushes might allow you to surprise or observe the enemy unseen and you may have to decide if giving away your position by firing is worthwhile. 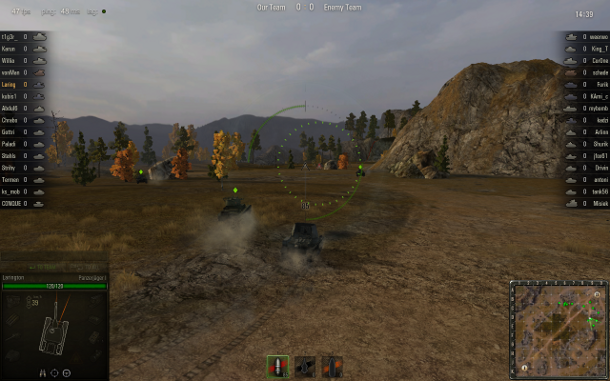 Many of the buildings (particularly the wooden ones) are destructible and I have on occasion cowered behind a building (To minimize the number of tanks that can fire back at me) as several enemy tanks have gradually blown the building. The environments and therefore tactical situations that you may get into are highly varied, with hilly, urban, forested and open environments sometimes split up by rivers, bridges, valleys and cliffs.

Your tanks will take damage of a variety of sorts, you might take a shot to the tracks or engines which will slow or disable your ability to move (Potentially deadly when SPGs are aware of your position). Your gun might be damaged affecting accuracy, tanks can catch fire and your crew can be killed by critical shots (Only in the battle itself, they’re there waiting for the next match afterwards). Trying to create situations where you can fire on the enemy without them being able to fire back is key to winning a fight. 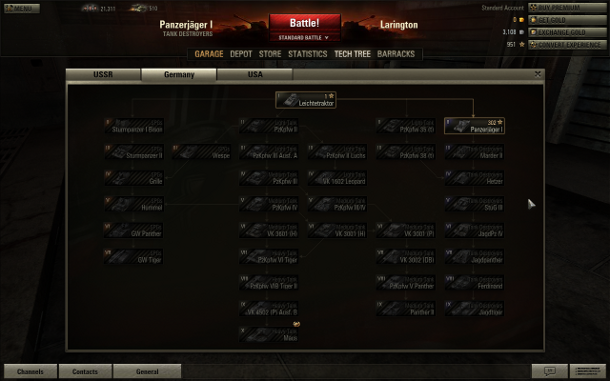 At the end of a battle you’ll receive experience points used in research and crew training, 5% of which goes into the free experience pool. You’ll also receive silver which is used on tank repairs, ammunition, and to buy tanks. There are standard & special upgrades and consumables that can speed up repairs and give you other boosts.

My biggest criticism of the game is that sometimes the randomized selection of which players (and therefor tanks) are entered into each battle can be lopsided, particularly when two or three friends have formed a small group confusing the tank selection systems as a result. It tries to create a balanced & fun battle but isn’t 100% successful, usually it’s fine though.

Ultimately, World of Tanks demonstrates that a free to play game can be fun, with relaxed yet none-the-less tense real time combat with other players. If you’re looking for something a bit like Counter-Strike but with tanks instead of soldiers you may want to give this a look. Best of all – it’s free to try out and just a 1.75 gig download away.

World of Tanks demonstrates that a free-to-play game can be fun.