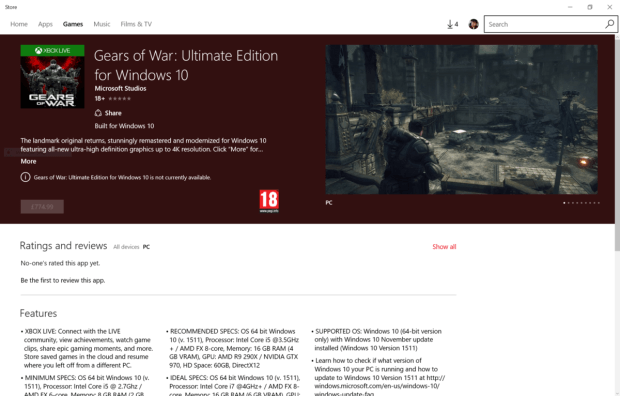 While we’ve known that a Windows 10 Gears of War: Ultimate Edition was on the way, we’ve not known many details. That is until now, as the game has apparently shown up on the Windows Store.

Reported by Windows Central and as you can see from the screenshot below there are plenty of details revealed about the release. One of the most interesting is that it will feature “all-new ultra-high definition graphics up to 4K”.

If you do pick up the Windows 10 Gears of War: Ultimate Edition you’ll also get the Deluxe Weapon Skin Pack and 11 bonus multiplayer characters. It is also interesting that the recommended specs have been revealed:

The recommended specifications are high, but so are the minimum, which comes as a surprise. With this page seemingly somewhat of a placeholder these may change closer to the games release. The price £774.99 will obviously change as well.

With the strange price as well as questionable specifications, it may be worth waiting for official confirmation before seeing these details as set in stone. The fact the page does exist though means that confirmation should be on its way soon.

Will you be picking up the Windows 10 Gears of War: Ultimate Edition? Let us know your thoughts in the comments section below.